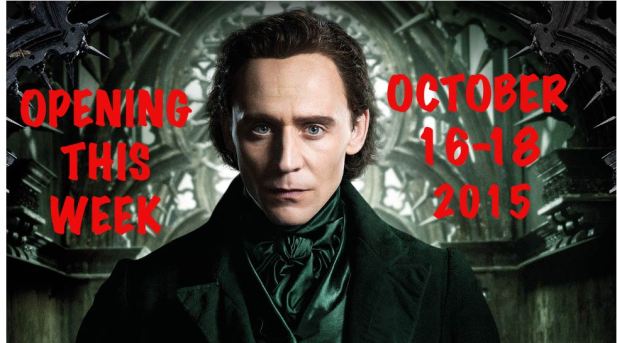 This week we have three very different films all marketed to different audiences and all three of them are films i was very interested in. The films are ‘Bridge of Spies’, ‘Crimson Peak’, and ‘Goosebumps’ and are all very big films that are capable of causing some havoc in the box office. So lets get into looking at these films shall we.

First up we have one that i am really really looking forward to and for many different reasons. ‘Bridge of Spies’ is a Drama/Biopic set in the Cold War about James Donovan who is sent to Berlin to negotiate the release of a pilot captured by the Soviets, and as you may know, Berlin definitely wasn’t the safest place to be in especially for an American. I loved the trailer, it looks intense, thrilling and emotional and looks like it will be a very dramatic look at this mans time in a very dangerous Berlin. One of the big reasons i am looking forward to this film is because i love a good biopic, so if this is even kinda good i’m going to love it. And the biggest reason is that the film stars legendary actor Tom Hanks and is directed by legendary director Steven Spielberg, WOW, what a dynamic duo that i hope have come together to make an incredible film. Check out the trailer below:

Next up we have a film that i was really really looking forward to this year ‘Crimson Peak’. The film is a Gothic Romance directed by master of horror and fantasy; Guillermo Del Toro. It stars Tom Hiddleston and Jessica Chastain in leading roles and they are great. The film does look like it is more of a Gothic Horror but it is definitely a Gothic Romance with some horror here and there. The film is also visually beautiful and has an amazing set design. I have seen the film already so check out my full review HERE with NO SPOILERS to get a better idea of how good or bad the film is. Here is the trailer to check out:

Finally we have the more family friendly film that seems to be aimed towards kids more than adults, ‘Goosebumps’. The film is based on the popular series of books titled ‘Goosebumps’ written by R.L Stine and each book focuses on a different scary story with a different monster, and there are a LOT of Goosebumps films, so there is a lot that the film could have incorporated. I read these books when i was younger and i cannot wait to see how this film adapts these awesome stories on to the big screen. The trailer i quite enjoyed and it looks to be going in an unexpected direction with Jack Black playing Author R.L Stine in a world where his books get unlocked and all of the monsters are unleashed onto the world. An interesting take on the books but i am really curious to see how Jack Black is in the film and if it is actually a good film, trailer is below.

So that is all for this weeks films, plenty of variety to choose from whether you are a Gothic Romance/Horror fan, a Drama/Biopic fan, or you want to take the family to see a family film, there is a film out there for everyone right now. What film will come out on top this weekend? Be sure to come back and hopefully check out Weekend Box Office on Monday.