‘Scouts Guide to the Zombie Apocalypse’ is a zombie horror/comedy that well, pits a group of scouts against a zombie apocalypse…. pretty self explanatory. The title alone should give you a really good idea about the type of film you are going to get, a very campy zombie comedy that isn’t fussed with what people would really do. For me, i really wasn’t expecting much at all from this film, the trailer looked ok and i was expecting to book in an average horror comedy, but i really enjoyed this movie. Was it incredibly original? No, it follows a lot of the usual beats that you tend to find in these zombie apocalypse comedies. So where it can’t perform in original storytelling it has to excel in the comedy and horror elements, and i thought it did a good job at that consistently after the 30 minute mark. There were some kinda funny moments, some really funny moments and a few horror elements thrown in there. Overall it was actually a really fun time. 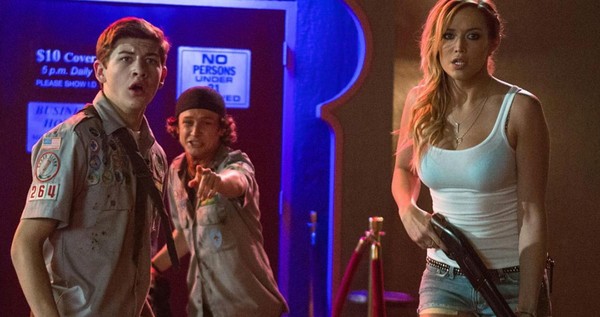 I will start with the first 30 minutes of the film which wasn’t that good at all. It spent the opening 30 minutes introducing a tonne of characters and hinting at many things that would come into play later on whilst also just teasing the presence of zombies in a few scenes. It was really starting to drag on as nothing of interest was happening except for a few small laughs here and there. The biggest thing that got me through this opening was the characters and also the performances behind them. I really liked the chemistry that the trio of scouts had, it made for some really funny and entertaining moments and made you care about them. Even the secondary characters and their interactions with the scout trio were pretty fun to watch. But this opening was just all over the place and oddly paced and should have been condensed down to 20 minutes to get straight to the point of the film quickly. But once the zombie apocalypse rather abruptly arrives, the fun begins.

From the moment you find out the zombie apocalypse has really begun, the silliness of the film takes over and i loved every minute of it. This film clearly doesn’t take anything seriously and that was the best part. The way they react to the zombies and choose to deal with them throughout the film makes for some really really funny moments. There was one moment in the film, without spoiling anything major where a zombie joins in to a Britney Spears musical number and i completely lost my shit. It was hilarious, and although it was only short i wanted it to keep going, it came out of nowhere and was probably my favourite part of the film. Also just the distinct personalities of these characters play off each other really well and as a result you also get some surprisingly interesting character development throughout. Who thought i would be praising character development in a silly zombie comedy.

In terms of the horror, it wasn’t scary at any point because of the overall tone of the film being very silly, but there were a couple of tense zombie moments broken up by some more campy humour. But even though there wasn’t any horror, the fact that the film uses practical effects for what i thought was like 98% of the film was not only really impressive for how good it looked but it also made everything better to watch. The fact that you see these zombies getting smashed up and it is all using practical effects with blood splatters made it really gory and it looked real and disgusting as oppose to a bunch of CGI crap.

In the end, this was a really fun, enjoyable movie after the first 30 minutes with plenty of humour to go around. The use of makeup, puppets and other practical effects helped to make the film more gory and include realistically exaggerated violence. If you are a fan of zombie horror/comedies such as Zombieland it is definitely a good watch.