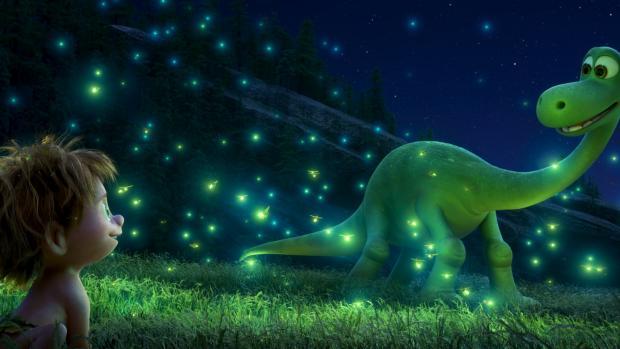 ‘The Good Dinosaur’ is the latest film from wonderful Pixar studios, and their second one this year after ‘Inside Out’. It is a very light-hearted family friendly film that follows a dinosaur who gets lost from home, makes friends with a little human and goes on an adventure… a rather uneventful adventure. Pixar are known for their striking visuals, great themes and morals, fantastic humour, memorable characters, and their incredible ability to craft unique and original stories. Well, the visuals definitely deliver, some of the themes and morals were fairly strong, the humour is kinda present, the characters were ok, but where this movie completely dropped the ball was in the originality and storytelling department. This movie was supposed to be released way back in 2013 and has since been riddled with many issues and problems that ultimately did have an effect on the quality of the film. The film was pushed back to 2014, where there were lots of re-writes to the point where the director and producer left the film, making the final product completely different to what it was originally going to be. It was pushed back to 2015 due to more story issues and it is definitely visible in the final result.

I will start with the positives, this movie is probably Pixar’s best looking film to date, the visuals of everything from the dinosaurs, to the nature and landscapes and even the weather effects were so beautiful and stunning that it really does suck you into this animated world. Everything was so perfectly polished that it looked very realistic whilst also incorporating Pixar’s signature animation style that only gets better and better with every new property. In terms of the performances i thought it was just average, pretty much the whole film is led by performances by young child actors and none of them really did anything great with the performances. I thought the best of the performances were by Steve Zahn and Sam Elliott who gave their secondary characters very distinct and interesting personalities that i wanted to see more of. It isn’t really the kids’ faults as they are probably very inexperienced but still, there was nothing great about their performances.

This movie, like pretty much all other Pixar films deals with certain themes or morals that are designed to allow viewers of various age groups to connect with the film on a more personal level. This film deals with the obvious ones like family and belonging, but also goes into confidence, and overcoming fears, and i quite like how they were handled in the film. None of them were force fed to you and they play out naturally over the course of the film so it feels very natural. The film does incorporate some humour but pretty much all of it is suited for young kids, there isn’t much for older audiences and that is a real shame coming from a studio like Pixar. And even then, there wasn’t much in this film that even kids will find particularly humorous. There were a few moments that were very cute, but no real laugh out loud funny moments that would get the whole audience laughing.

As i mentioned, the biggest thing wrong with this film was the lack of originality and a plot that was very basic for Pixar’s standards, and something we had seen in other films. The film hits a lot of the same plot points as other animated films, most notably, ‘The Lion King’. And i’m not talking about a few scenes that were reminiscent of events in ‘The Lion King’, i’m talking about 3/4 of this film pretty much being a semi-reboot of the iconic 1994 film. There were so many parralels to draw between the films that it honestly did seem very lazy because they had to know whilst writing this that it was strikingly similar to ‘The Lion King’. Not everything in the first 3/4 of the film is taking from Simba’s adventures as there are scenes and sequences and events that occur that does differentiate the two. But overall, as a main concept it hits many of the same beats and did make me lose interest at times because i felt like i had seen this before just with more interesting characters and more depth to the story.

In the end, ‘The Good Dinosaur’ is a very average film and a step down when you consider the quality of Pixar’s other memorable films. Kids will get a lot more out of it than adults, i hope…. as the humour for a wider audience isn’t really there. The many similarities to ‘The Lion King’ for me was a huge strike against the film but i managed to still come out of it having seen a decent/average movie.