‘Spotlight’ is a Drama/Biopic that tells the true story of the Boston Globe reporting team known as ‘Spotlight’ and their investigations into the allegations of child abuse in the Catholic Church and how what they uncovered in Boston had a huge affect on the rest of the world. This isn’t a topic that people really like to discuss openly and is something that happened fairly recently and is still having an impact on society today. And this film did an amazing job at presenting this story in a way that makes it easy to understand for the audience and keeps it very grounded and real without making it a very uncomfortable thing to watch. It is impossible to tell the story without having to go into some of the horrifying and somewhat confronting details, so the film did great at finding a balance between being too controversial and being too Hollywood. That aside, this movie was very well put together through multiple departments. The acting was fantastic as is expected from a cast of fantastic actors and actresses, Tom McCarthy did an astounding job directing the film rather surprisingly, the writing was exceptional and it really is a big Best Picture contender. 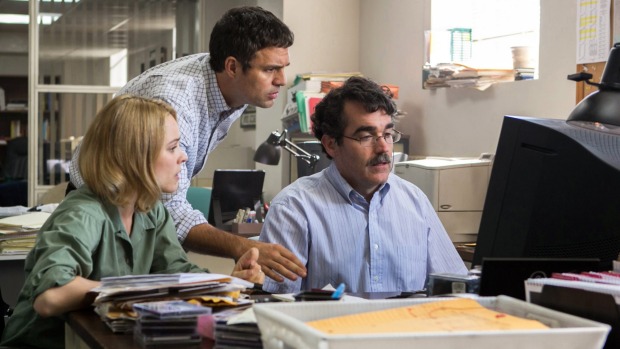 The performances in this film were just so damn amazing to see. Mark Ruffalo, Michael Keaton, Rachel McAdams, Liev Shreiber, Stanley Tucci, and John Slattery all killed it in their roles. This was probably the best ensemble cast of the year as everyone was fully committed and delved deep into their roles to the point where you stop noticing that it is Keaton and Ruffalo. Amongst all the greatness, Mark Ruffalo was still the stand-out performance of the film, watching him act in this film makes me wonder why the guy isn’t a bigger actor than he is. It is a shame that most people only think of The Hulk when you mention Ruffalo as he has other roles where he puts in some solid performances. Michael Keaton as always was great, he is one of the best working today so you just know he is going to nail any role you give him. Unfortunately because of the other amazing performances around him he couldn’t stand out enough to get a Best Actor nomination but he was very entertaining nonetheless.

The directing by Tom McCarthy was a surprise for me after i had looked at his previous work. I was unfamiliar with his 3 earlier films so really all i had to go on was last years ‘The Cobbler’ and well, it didn’t have me really excited to see how he does on this film at all. But after seeing the amazing work he did with this film, it is hard to say that the same guy who directed ‘The Cobbler’ also directed the Best Picture nominated ‘Spotlight’. The way he ties this film together and arranges all of the individual stories going on was very impressive to see. For quite a bit of the film you have the various characters all going off and investigating certain aspects of the case, and to be able to follow each one of their journeys in a way that allows you to keep track of everyone and not get lost is a great achievement. I also like the way he paced the film, there were a couple of moments fairly early on where i felt it could pick up the speed a little, but after 30 minutes in it was smooth sailing. But when much of the scenes involve interviews, meetings and scenes of those sorts it is very difficult to try and cover everything without skipping things or boring people, so well done again.

So in the end, Spotlight is just an amazing movie and manages to remain entertaining for the entire 2 hour runtime. It provides you with many of the facts and information regarding the allegations and mixes that in with a very interesting and entertaining story and film. The performances are all great and definitely worth watching just to see these great actors doing what they do best. I love a good biopic and this is definitely one of them so i highly recommend checking it out. Will it win Best Picture? Although my pick is still ‘The Revenant’ i would have to say this one of the top 3 nominated that actually has a chance.