OK so here we go, did you know this is Kevin Hart’s 4th ‘Buddy Comedy’ in a row?? And not over four years, in just 2 goddamn years… The industry clearly needs a new short and loud pocket-rocket comedy actor ASAP because for me at least, Hart just isn’t a big draw anymore. But anyway, this buddy comedy pairs Kevin Hart with Dwayne “The Rock” Johnson in an attempt to bring a new comedic duo to this very formulaic action/comedy. The plot is as you would expect, it literally follows every beat you have seen before time and time again and in terms of that aspect the film doesn’t do too well at being original. Where the film shines and where you get pretty much all of the enjoyment is with the chemistry between Hart and Johnson which is really entertaining most of the time, and carries the film right to the very end. 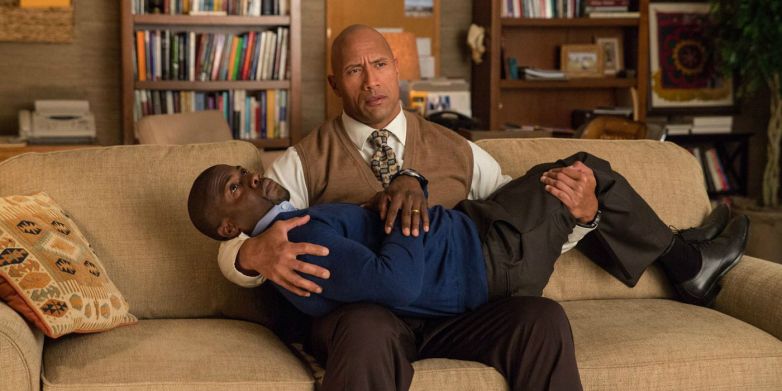 Both of their characters i liked, it wasn’t just their own characteristics that were interesting, it was their chemistry and how they went back and forth that made their scenes so enjoyable. Kevin Hart does play the same character you’re used to seeing but he is a little more subdued than in previous outings, making his comedy a little more bearable. But seriously, I can safely say that without Johnson in this film it would be complete trash. He is the saving grace here with his very quirky and intelligently dumb character that brings so much life to the film. We all know The Rock is one of the best entertainers in the business right now, and i don’t know what it is but he wins you over in every goddamn scene… It’s gotta be the smile, when any scene fails he just smiles and all is good again. But really, the way they interact throughout the film makes for some very funny moments and other mildly funny moments that make sure you are never bored.

As i mentioned, the plot isn’t great and you know where it is going but it doesn’t affect this film as much as it relies predominantly on the humour and character interactions driving the film, not the story. It touches on some interesting themes, one being bullying, and has some very good messages in there, and thankfully they aren’t shoved down your throat so you can enjoy the film without it being bogged down by influential speeches. The action is also quite enjoyable in the film, and that is where Johnson’s action background really comes in handy, because it is more believable that this absolute tank of a man would be able to do all or most of this stuff.

So in the end there isn’t much here that will surprise you. If you have seen a few action comedies in your lifetime you have the plot of this film fully covered. If you still find the oversaturated Kevin Hart really funny, then you have that. And most importantly, if you are with 90% of the population and can’t get enough of The Rock, then this is definitely a film you will get a lot of enjoyment out of. It is funny and consistently amusing right through but won’t do anything to completely separate itself from the other films out there like this.