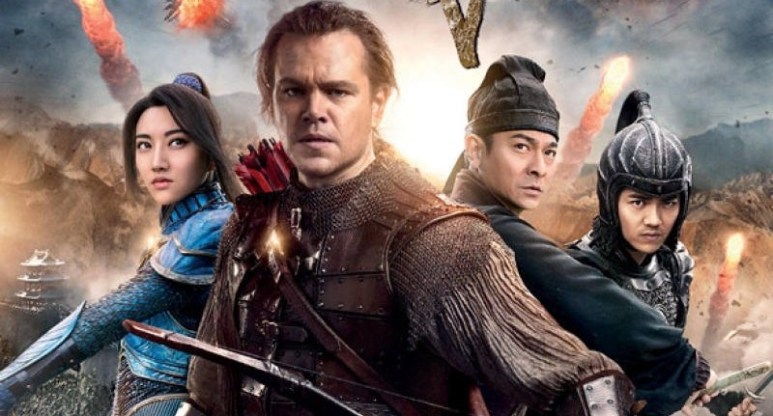 Jason Bourne teams up with the Ancient Power Rangers to fight some monsters.

‘The Great Wall’ is an Action Fantasy that is definitely not a true story about the construction of the wall itself. Rather this film directed by well known Chinese director Yimou Zhang and starring Matt Damon, Willem Dafoe, Tian Jing, and Pedro Pascal follows a group of Europeans who get tied up in a war between the Chinese and an army of monsters known as the ‘Tao Tei’. Going into this film i had very low expectations expecting a dumb B-movie CGI-fest riddled with cliches in story direction and dialogue. Now although what i got is definitely not a good movie i was surprised at the fact that this was actually an ok movie that i got some enjoyment out of. Visually there is no doubting the expertise of director Yimou Zhang whose style is shown off here mainly through large scale set-pieces and also by injecting bright colour into what would otherwise be a bland war of greys and blacks. It’s mostly fast paced and at times enjoyable but at the same time it lacks a consistent sense of excitement and epic tone which a large scale war on monsters film should have. 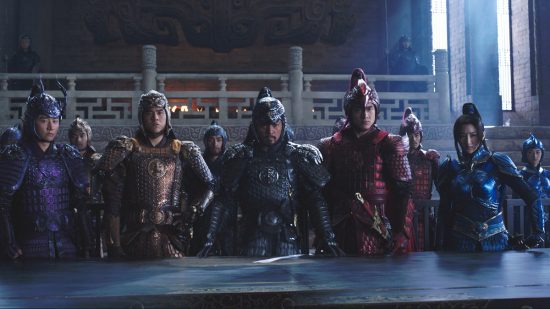 Firstly i will touch on the way this film looks as visually i would say this was a successful film. The CGI of the monsters, the wall, and the overall scenery i thought was mostly very good. If the monsters looked very cartoony and out of place this movie would have been a total disaster, thankfully that isn’t the case. Aside from a few scenes and brief sequences of “questionable” CGI it did a pretty good job. As i mentioned earlier Zhang’s use of colour was a very refreshing addition to the film which gave it some identifiable personality and prevented it from being a dull mess of an army in black armour going up against an army of dark green monsters. Maybe this is a thing still big in Chinese cinema but this film did something very annoying i haven’t seen a film do since 2010’s ‘Saw VII’. This was a time where films would emphasise their use of 3D by annoyingly projecting objects directly at the camera to ‘enhance the experience’. Rather than enhancing the experience it’s just a lazy effect that got more and more irritating the more this film used it.

One of the really cool things about this film that actually enhanced my investment in it was the fact that aside from the three leads being big name American actors the entire rest of the cast were of Asian backgrounds. Also there is a considerable amount of Chinese being spoken in the film which only makes sense as this is taking place entirely in China. And in saying this i think the Chinese supporting cast had some of the strongest performances in the film overall. They were the most convincing in their roles and not as distracting as seeing Damon, Pascal, and Dafoe put on accents and prance around looking lost. Neither of those three were particularly bad they were just fine, passable if you will. The dialogue overall is pretty decent but there are some pretty lazily written lines that really do stand out. Matt Damon is just doing his thing and selling the action as well as he can but even he can’t propel this film above being just mediocre.

So in the end ‘The Great Wall’ is definitely a better film than i was anticipating but it doesn’t quite hit that marker of being good. For his first English-language film Yimou Zhang does a really solid job directing to where most of the visual elements are nailed down very well. The story is just fine, the dialogue isn’t too flashy, and the action is just occasionally enjoyable. There isn’t a whole lot to love about this film but there also isn’t a whole lot to hate either, its pretty much in the middle.