Episode 6 of the Twin Peaks revival once again took us bouncing around the world, progressing each plot-line with little snippets here and there, and also introducing some new and reintroducing some pretty exciting old characters, one of which you could say is being reintroduced ‘for the first time’. This episode wasn’t as linear as the last but it also wasn’t as crazy as the first 4 entries, it strikes a middle-ground that touches more on the unknown mysterious things going on, and there are a lot of them.

Lets start with all of the Dougie content because once again his story takes centre stage in the episode and it is yet to fail in making me laugh. As per the end of last episode Dougie hasn’t moved from the statue outside his work, whilst messing with his jacket he is then escorted home by some police officers. Cooper does once again start to come through making the connection of the cops badge to the Twin Peaks Sheriff’s Department badge. Whilst at his home we get another classic moment from Dougie when he goes to put Sonny Jim to bed in his very cowboy themed bedroom. Upon discovering the sound of a clap turns Sonny’s lamp on and off he becomes mesmerised by the idea and proceeds to have a short but fucking hilarious clapping war with Sonny Jim. Following this comical interaction we get an interesting sequence where Dougie, led by his newfound supernatural abilities, begins drawing a sequence of incompresensible sketches with lines, ladders, and stairs all over the infamous ‘case files’. But it seems that when delivering the files to work late in the episode he managed to point out something suspicious in the files with all those scribbles……….. possibly finally proving his co-worker’s corruption. Also lets not forget that MIKE made another appearance trying desperately to wake Cooper up before it is too late, maybe he knows a certain ‘Spike’ is on the way as he also tells him to not die……. helpful.

We also have a decent amount of shit going down in the town of Twin Peaks, some of which is pretty damn exciting and some pretty damn odd and disturbing. So firstly we have a bathroom sequence where Hawk accidentally drops a coin from his pocket and upon picking it up he realises it features the head of a Native American on it, this then leads him to remember the door on the toilet in the bathroom is made by a company with a Native American head as the logo. Hawk seemingly recalls the Log Lady’s clue regarding his “heritage” and proceeds to pry the front of the door open. And what does he find? Jackpot! Some hidden letters, but who are they from? And how do they relate to Agent Cooper? Somehow i don’t think we will have to wait too long to find out more about the letters. We also once again meet Carl, a character who was introduced in ‘Twin Peaks: Fire Walk With Me’ and doesn’t seem to have changed much just enjoying a very laid back simple life. And finally we get some cherry pie action in the RR Diner with a very authentic reaction to the best tasting cherry pies on the planet. 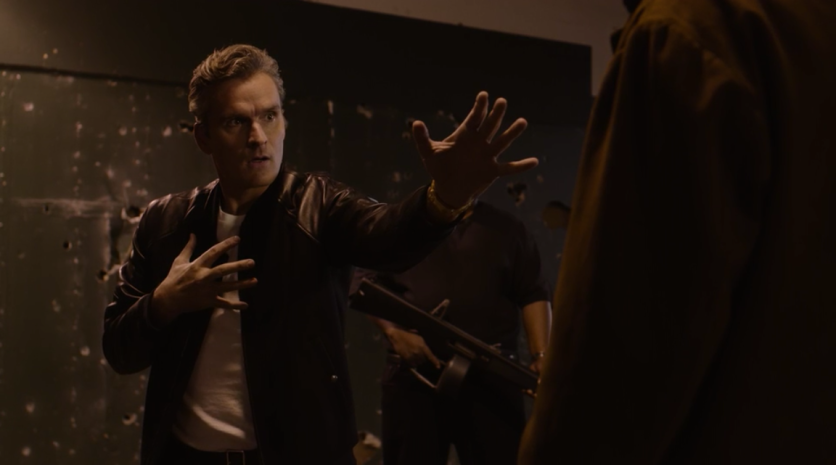 Elsewhere in Twin Peaks a couple of characters get more substantial introductions as oppose to previously being in a single short scene. We meet Richard Horne played by Eamon Farren (relationship to the Horne family still not known) who appears to be in the middle of a mysterious meeting with some gangsters led by Red played by Balthazar Getty. What is interesting is that Red seems to be in tune with the magical forces that surround Twin Peaks which means i think we are going to be seeing a lot from the man who is able to teleport coins and who threatens people by saying he will eat their brains……. Charming. But the real shocking moment comes when Richard is speeding through Twin Peaks still under the influence of drugs and he is involved in a hit and run incident where a young kid is killed, and this is where this Twin Peaks revival does not hold back. It doesn’t cut away from the event, you see the kid get crushed by the front of the pick-up truck, full contact and all. And it really lingers on the aftermath, it’s a deadly shocking moment and not at all a pleasant sight. It also leads to a scene where Carl sees the soul of the boy rise to the heavens, what exactly is his link to the supernatural?

Elsewhere in the world we get a continuation on Duncan Todd’s plot-line and where exactly it is heading. Upon seeing a red box appear on his computer screen he removes from his safe an envelope that has a very distinct black spot on the front. We then see the letter get delivered to an assassin known as Ike “The Spike” Stadtler played by Christophe Zajak-Denek who opens it to reveal images of Lorraine (The woman frantically trying to phone the black box last episode) and Dougie. After stabbing the photos with his ‘spike’ he then goes on a running rampage stabbing to death Lorraine and the various other people in her office. Now it looks like Dougie is next, and in his current state it doesn’t look like he will last very long.

But then we get probably the coolest moment in the entire fucking episode for fans of Twin Peaks. Those who watched the original show will know that Agent Cooper regularly recorded tapes about what was happening in Twin Peaks addressed to his secretary Diane. Throughout the entire show and Fire Walk With Me we never once saw what she looked like…… UNTIL NOW. Under direction by Gordon Cole, Albert is directed to find someone in a bar who can potentially help in uncovering the truth about Agent Cooper. Upon walking into the bar we find out the person he is meeting is fucking Diane, and through this brief interaction we finally find out who Laura Dern is playing in the show…… it only took us 6 episodes. Sporting a bleach white bob haircut, we get our first look at Dern’s Diane, someone who i expect to play a major role going forward this season.

And finally a few small moments of note, once again the junkie mother in Rancho Rosa is briefly featured yelling 119 at the top of her lungs. Something odd is going on there and i don’t think it’s nothing. And then you have quite possibly the best, most spontaneous moment of the episode where upon exiting his car in the pouring rain Albert yells out a truly inspirational quote. “FUCK GENE KELLY YOU MOTHERFUCKER!” he exclaims……. not a fan of ‘Singing in the Rain” i assume. So in the end this was still a very strong entry in the series but probably my least favourite episode so far (by a hairline). The constant jumping around between a tonne of locations can be a bit much sometimes but with a larger story comes much more content to cover. Speaking of that, there are now 12 hours left in this Twin Peaks revival, and considering how much progress we’ve made so far in the first 6 hours either this season is going to pick up the pace rapidly in the latter half or we will end this season with more questions than we had at the end of Season 2. Somehow i wouldn’t be surprised if that was the case.