Another year, another shark movie and this time it looks like someone watched ‘The Shallows’ (2016) and thought it would be more intense if people were stranded 47 meters down as oppose to on the surface….. Oh and they really dug the text message graphics so they “borrowed” that too. Just incase you needed a reason to never go cage diving this movie is here to give you many. ’47 Meters Down’ is directed by Johannes Roberts and stars Mandy Moore and Claire Holt as sisters who go cage diving and find themselves stranded at the bottom of the shark infested waters with limited oxygen. This movie however doesn’t fully deliver on the amount of thrills and intense sequences you’d expect from this premise. It has its moments but isn’t intense enough to really keep you invested. The characters themselves were fine, performances weren’t astounding but neither was the writing for them. The plot takes a while to get going and sets up relationships and character history that go nowhere, rendering most of the first act pointless.

One thing these shark thrillers need to do to get you to be fully invested is give you characters who you can root for in surviving the shark threat. For instance, Blake Lively was a smart and resourceful character who I loved watching and found myself genuinely caring for their survival. These two sisters however; Lisa (Moore) and Kate (Holt) were really damn frustrating to watch at times, Lisa less-so but still couldn’t decipher whether I was rooting for the girls or the sharks (who don’t make too many appearances). I get it, being stranded at the bottom of the ocean would be stressful and you would understandably act irrationally at times but there were moments where I was almost yelling at them to stop being so stupid. Of the two, Lisa had moments where I was able to root for her to survive, Kate however was the one where if one was to die, i’d sacrifice Kate no doubt. The performances behind the sisters were ok, some line delivery felt very forced but they sold the fear factor adequately enough. Veteran actor Matthew Modine is dragged into this movie as Captain Taylor and he’s just cashing in a paycheque for very minimal screen-time.

The plot plays out more or less exactly how you expect it to, you go into this film knowing the fact that when it comes to space and the ocean, nothing good ever happens. If you expect the worse you basically know how things will play out and you just try to make do and last through the dull parts to get from one thrilling scene to the next. These scenes however are few and far between with long sequences lacking any drama broken up by the occasional jump-scare or moment of imminent shark danger. But i will commend the film for doing one thing towards the end that I actually thoroughly enjoyed. I won’t spoil it for obvious reasons but it throws a curveball in the final act that I didn’t see coming and in hindsight was set up fairly early on. 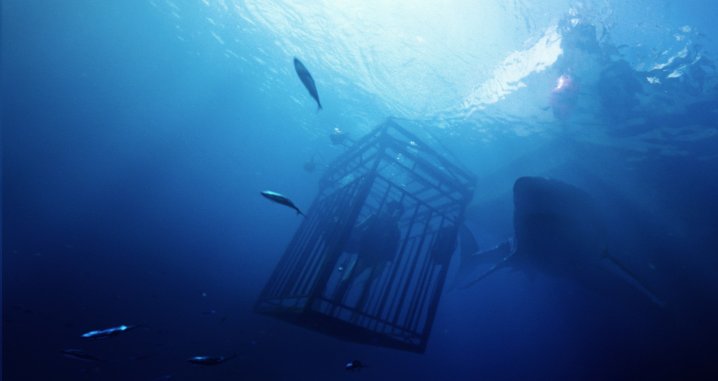 So in the end, as far as shark thrillers go this isn’t all too great and especially when compared to last year’s ‘The Shallows’ this doesn’t come close. There are a handful of tense moments scarcely arranged throughout the runtime but quite a bit of downtime spent with characters you don’t really care about. You know what this film was missing? Steven Seagull, i feel that if he had made a cameo connecting this to the Shallows universe more people would have ‘flocked’ out to see it……. Get it? seagull….. flocked…… i’ll see myself out. And just incase you were wondering a sequel IS in production and you guessed it, next time we’ll be going 48 meters down.