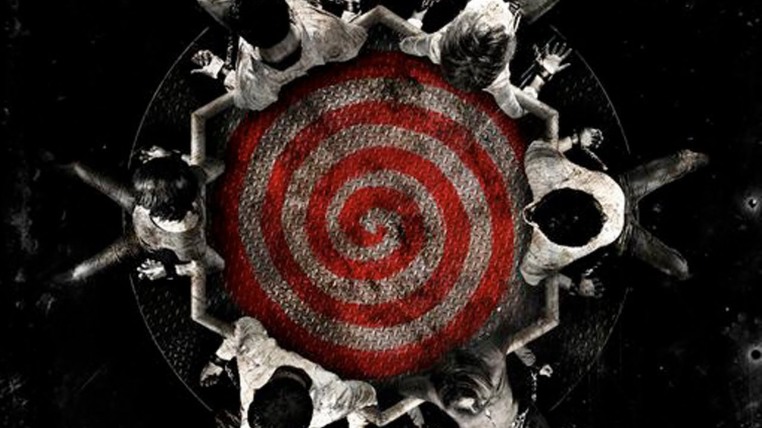 Saw VI is the last film in the franchise that despite my obvious love for the it, it can still be considered a good movie, the same can’t be said for VII. But this entry marks another change in director for the Saw franchise, this time bringing Kevin Greutert into the directors chair after working as the editor of all 5 previous instalments. The story once again continues where we left off and features a brand new series of traps as per usual. Hoffman (Costas Mandylor) now remains the final unchallenged successor to Jigsaw (Tobin Bell) and finds himself hastily executing another game as the FBI comes dangerously close to discovering his true identity. Once again we follow two seperate plot-lines, the main trap and the FBI focused one as well as the presence of multiple flashbacks. Some of these story elements are very intriguing and full of juicy information and cool twists whereas some others just aren’t all that interesting. Also despite the fact that this film contains my second favourite scene in the franchise it isn’t all that high in comparison to the others. 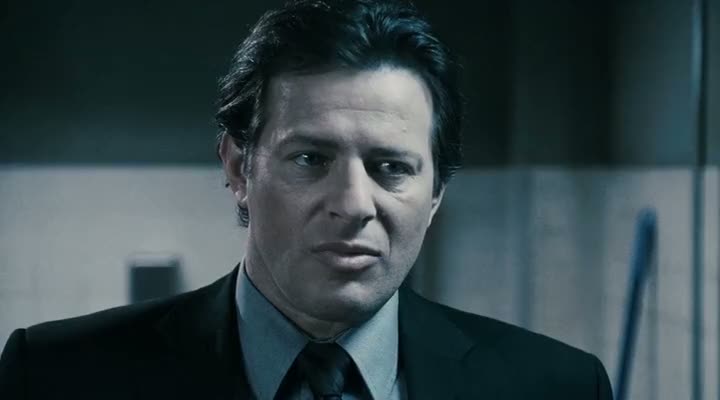 One side of this plot is focusing on Hoffman who following the death of Strahm is trying to maintain Jigsaw’s latest game whilst at the same time trying to play into the FBI’s demands in an attempt not arouse any more suspicion. Every scene which focuses on the development of this major plot that has been brewing for a few films now I loved. It’s an entertaining cat and mouse game that moves at a rapid pace and holds many cool surprises. Jill Tuck (Betsy Russell) has a major role in this plot as well as her own scenes, none of which I will go into here due to the amount of spoilers surrounding essentially all of her scenes. The other major plot is what we have come to expect; a new game made of a series of traps featuring groups of victims. This entire plot was integrated into Jigsaw’s history very well, more-so than the game in Saw V, but the problem here lies once again with not being invested in the lead victim’s journey. 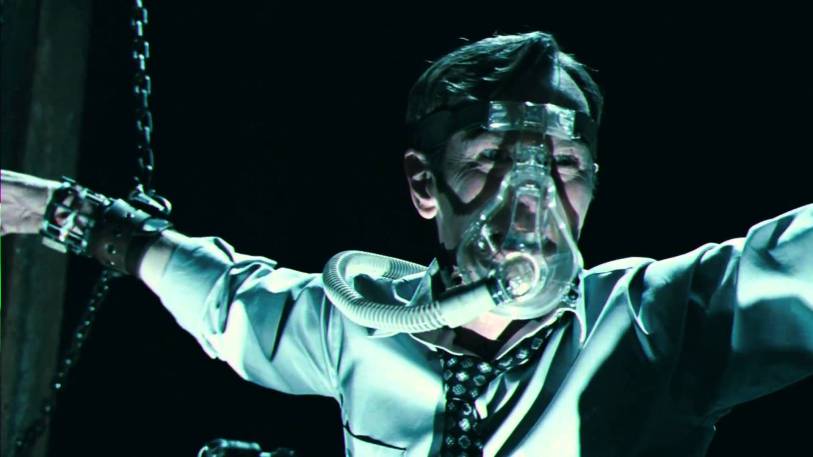 William Easton (Peter Outerbridge) is at the forefront of this new series of traps and i’ve always found it hard despite watching this movie many times to be invested in his story. I mean, as I mentioned, the way his history collides directly with that of John Kramer is cool to see but he isn’t an interesting enough character to hold my attention through his journey. Other than William, the only other semi-major new character is Pamela Jenkins (Samantha Lemole) who is just a dull and boring character serving barely a purpose. You really have to go back to the recurring characters to find good performances and people you enjoy watching on screen. Costas Mandylor is still incredible as Hoffman who is more on edge here than he has ever been and he’s such a joy to watch. The presence of Erickson (Mark Rolston) is more than welcome as Rolston is naturally talented and produces a damn convincing performance without having to put in a tonne of effort. 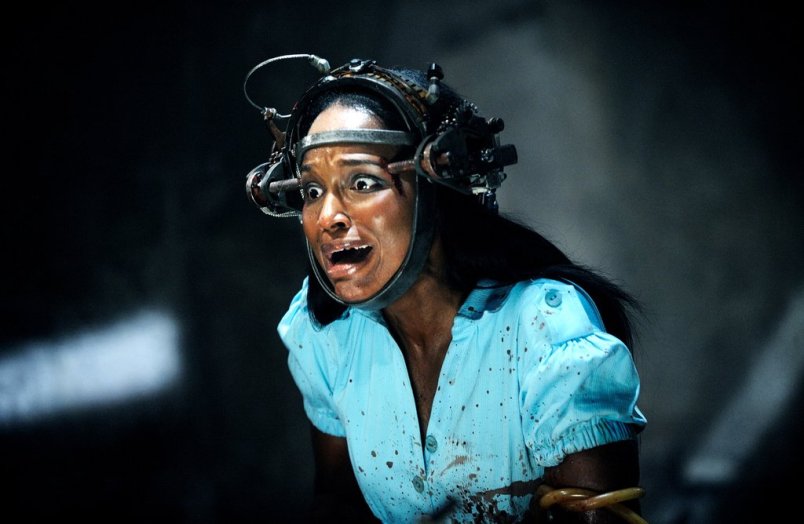 And then you have a number of supporting roles, especially ones associated with the main game which are pretty awful. For instance, Shauna MacDonald and Devon Bostick play a mother and son in a few scenes and they were bad…. like really bad… Thankfully the worst roles are very briefly featured because this could have been a disaster. The flashbacks are once again integral to the story and very well integrated in this entry. Some flashbacks are just ok and explain some stuff you aren’t fully invested in but some of these flashbacks reveal a TONNE of cool information and explain a lot. There is one very brief 10 second flashback right in the beginning after the cold open which is very poorly edited in and is random and forgettable when it should be awesome. One other high praise I will give this film is that some of the individual traps in here including the one featured in the cold open are pretty well designed especially compared to some of the stuff in Saw V. The use of quick, rapid editing makes the opening trap more graphic and confronting. 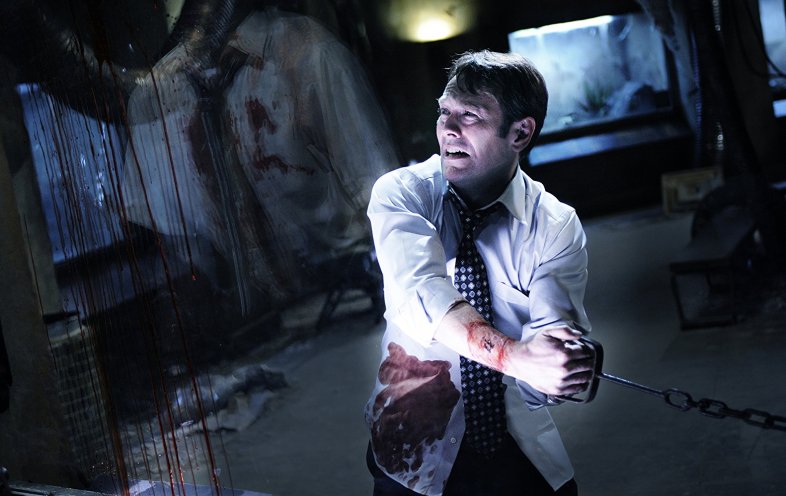 So in the end, what Saw VI establishes is that the only interesting content and the only entertaining scenes are those focused around characters from the previous films. Thankfully this takes up a large chunk of the runtime saving us from spending too much time with the uninteresting characters involved in the main game. It is a very gory entry with a tonne of gruesome bloody moments that will have you cringe. I also want to give props to the sound department because some of the sound effects alone are enough to make you cringe in pain. It adds a lot to the effectiveness of the horror filled trap scenes. We are almost at the end here and where the main story ends in epic fashion, the film in which it ends in isn’t great at all.

So once again I wanted to touch on a number of spoiler filled moments from the film that I couldn’t mention above. Firstly I will get the bad out of the way by talking about one of the twists at the end of the film which is regarding the main game. So when William gets to the end of his game with 1 second conveniently left on the timer we learn that this was also the game of Brent and Tara, a mother and son who we assumed up until this point were related to William. But it turns out that William’s family that had been referenced a number of times was actually referring to his sister Pamela Jenkins. This is a twist that explains Pamela’s presence in the test but isn’t an entertaining resolution by any means. It doesn’t all of a sudden give more meaning to William’s journey and doesn’t do much to add to Brent and Tara’s characters….. so it’s a weak resolution.

One of the big shocking moments in Saw VI actually happens mid-way through the movie where we find out that Lindsey Perez is still alive and didn’t die as a result of the exploding doll in Saw IV. The look of shock on Hoffman’s face is exactly how I looked when this revelation was revealed. So it turns out that Erickson hid the secret from everyone including Strahm considering she was still a target and I loved this twist to bring back her character….. even though she doesn’t really last long. So with Perez now back on the case the FBI gains rapidly on discovering Hoffman is a Jigsaw accomplice, first they discover that the knife used to cut the jigsaw piece on the latest victim is the same style of knife used only on the Seth Baxter case. Then they obtain the Seth Baxter tape and begin unscrambling the audio to find the original voice behind it. And here we have one of my favourite all time scenes in the Saw franchise where Erickson and Perez descramble the tape to find Hoffman’s voice whilst he is in the room with them. This scene is so intense and the irony is brilliant as with the line “Right now you are feeling helpless” Hoffman is the one feeling helpless. And then Hoffman goes full murderer and slaughters Erickson and Perez supposedly erasing all leads they had on him.

In the mean time Jill is going on her own little adventure centred around the contents of the box left to her in John’s will. We find out that there are 6 envelopes in the box containing the victims of the newest game as well as a mysterious orange package. And then in a later scene she meets up with Hoffman and at this point we learn that she has been helping Hoffman fulfil John’s final wishes. She hands the envelopes over to Hoffman and he goes off to begin the main game. Jill then later delivers the orange package to someone residing in a room in the hospital, the identity of this person we do not yet know. Then we get a fucking awesome flashback back to before Saw III with Amanda Young and Hoffman arguing whilst setting up Timothy Young’s trap in which Amanda teases the idea of Hoffman’s own test. Then Jill enters the scene to receive a key from John which would be used to open the box he leaves her in his will. What this scene reveals is that Jill has also known about John’s traps the whole time, essentially making her his 3rd accomplice and the 3rd time they have used the hidden accomplice twist. Then we learn that Jill kept the 6th envelope for herself as oppose to giving it to Hoffman and sets off on a mission of her own.

Then we make it to the big final twist at the end which is HUGE and just straight up awesome. So Hoffman makes his way back to where the main game is being played where Jill is waiting for him and leaves a letter for him. This letter is revealed to be the same letter Hoffman left for Amanda Young before the events of Saw III and the one she reads and cries over in Saw III. The letter reveals that Hoffman was aware of Amanda’s involvement in the death of John’s unborn son and threatens to tell John the truth unless she goes against John’s wishes and kills Lynn Denlon. It’s an awesome scene that explains Amanda’s originally unclear motivations in that scene. Then Jill electrocutes Hoffman, straps him into a chair, and places a newer model reverse bear trap onto Hoffman, leaving him to die. We learn that the 6th envelope was of Hoffman and Jigsaw had planned for Jill to get rid of him once that main game was over. Jill leaves the room and unfortunately for her, Hoffman manages to MacGyver his way out of certain death leaving him with a decently sized flesh wound in the final scene. This trap was the payoff of Jigsaw’s tape for Hoffman that he swallowed back in Saw III.

But this isn’t the end as Saw VI is the first and only Saw film to feature an after-credits scene. The scene takes place presumably right after Amanda reads Hoffman’s letter during Saw III and in the scene she pays a visit to Corbett Denlon and tells her not to trust the one who saves her, knowing it would be Hoffman. It is unclear if Corbett did anything with that information though so the purpose of this scene isn’t entirely clear.