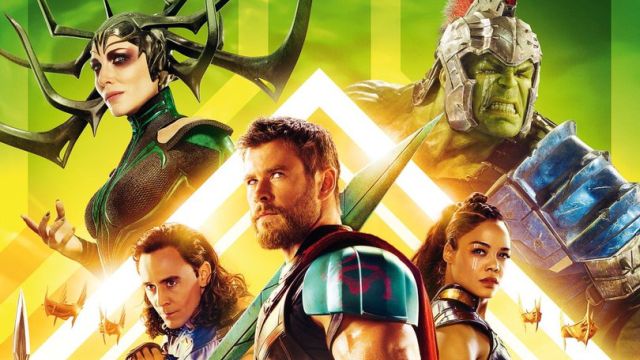 Thor: Ragnarok has arrived and what an incredible, hilarious, action packed, and just straight up fun adventure it is. Just when you think the superhero genre has touched on all the story beats it can, in comes director Taika Waititi (What We Do In The Shadows (2014)) with his spin on a Marvel film that has instantly cemented itself as one of the best. The third entry in the Thor franchise follows our titular hero (Chris Hemsworth) on a mission to strike down the vengeful Hela (Cate Blanchett) and prevent the impending destruction of Asgard, an event known as Ragnarok. All the while coming across a few new and familiar faces to aid him on his journey. This movie’s plot covers so much in such a short period of time it’s impressive Waititi managed to pull it off as well as he did, it is paced mostly consistently and is a thrill ride that almost never lets up. The performances from new and returning characters are beyond exceptional and everyone, even Hela, gets ample time to shine. Everything from the visuals and the score/soundtrack, to the general tone is derived from Waititi’s unique style and it fits seamlessly in this world.

Chris Hemsworth is as incredible as ever as the comical yet truly heroic Thor and his journey through this story is one of many emotional highs and lows that have Hemsworth delivering some of his most exciting work. But in a film with a large cast of characters he is at times overshadowed by many of the other phenomenal characters he shares screen-time with. Tessa Thompson’s Valkyrie is one of the many shining lights of this movie as she is a total badass. Move over Black Widow and Scarlett Witch, Valkyrie is here and she kicks some serious ass. What I love about her character isn’t just that she’s insanely strong but she is quite charismatic, has plenty of personality, and even though this is our first time meeting the character I instantly felt like I knew her and that’s great character building. Then you have the presence of Mark Ruffalo’s Hulk who is such a joy to watch and utilised perfectly here. Much like many of the roles in here, his contributions to the story are very much grounded in both the action and comedic realms and it proves that we really don’t need a Thor standalone movie to see plenty of the Hulk we know and love.

Now we move on to the villain….. and I don’t mean to overhype anything but Hela is absolutely ruthless here and by far one of the greatest villains of the MCU….. i’d go so far as to say she’s in my top two. Her black and green getup had me drawing instant similarities to Rita Repulsa from Power Rangers (2017), but the appearance is where the similarities stop because THIS is the Rita we should have gotten. Unlike other villains in the MCU who either stand around boasting about their power or just have thousands of ‘droids’ do their dirty work you really feel Hela’s strength here and she proves to be a formidably tough opponent for the now hammerless God of Thunder. Cate Blanchett is as perfect as the casting gets in this movie as she is so chilling and brings a tonne of gravitas to the role. When she speaks she does so with much conviction and so powerfully you’d just take the fact that she is insanely strong at face value and surrender whilst you’re still alive.

There are a few other supporting roles I feel are necessary to highlight, firstly Jeff Goldblum was good as the Grandmaster and he plays the quirky role quite well. He isn’t given a whole lot to do but when he is on screen he is a joy to watch. Idris Elba is back as Heimdall and his journey here is an interesting one that is crucial to the main plot and integrated into the main run of events pretty seamlessly. And then I get to what many will call the surprise standout role as every time this character is on screen it is beyond hilarious….. i’d say this character is up there with one of the funniest in the entire MCU. This hysterical character is an alien rock creature by the name of Korg played by the director himself Taika Waititi. I kid you not, every time the character opened his mouth I was pissing myself laughing, as was the rest of the theatre. He wasn’t overused and had the most on point comedic timing making him the biggest surprise takeaway from this film. Tom Hiddleston also has a major role once again as Loki and there’s no denying he is a great character and his scenes with Thor are always fun to watch due to their clashing personalities.

Now I need to touch on the real star of this entry in the MCU and why it works so damn well, and that is the looming presence of Taika Waititi over every scene. If you have seen any of his films, specifically What We Do In The Shadows you would know he has a very specific style of humour and filmmaking setting him apart from many other directors. This movie is hilarious from start to finish, but it isn’t like the humour you’ve seen in other Marvel films, a lot of it is very subtle and will almost certainly catch you off-guard multiple times. Visually it is a stunning movie with incredible set design, costuming, and large scale visual effects that rival all that have come before it in the MCU. I saw this in IMAX and it was beautiful, the vast landscapes, scenery, and action sequences are captured so well you lose yourself in the movie on more than one occasion. The music is also another highlight, there is a great combination of score and music that highlights certain scenes very well. Also listen out for when ‘Pure Imagination’ from Willy Wonka begins to play….. safe to say I completely lost it.

So in the end Thor: Ragnarok is an exceptional movie, the best of the Thor franchise and up there as one of the best in the MCU. Taika Waititi brings a breath of fresh air to the MCU with his unique filmmaking style making this a perfect blend of a Waititi film and a Marvel film. The performances of characters both new and old are fantastic and the movie is packed with hilarious moments, epic moments, and it is all very fun. The only gripe I have with the film is that there are a couple of short moments here and there where the pacing dips momentarily but that’s only a minor fault as I left without any major dislikes from what i saw. This sets a new standard for the MCU going forward and i cannot wait to see where things go from here.