Atomic Blonde is an action thriller that has been widely considered to be the “female John Wick” for its similarities in style and offering plenty of fast paced, close quarters action. It’s hard not to compare this to John Wick (2014), especially due to the fact that it is also directed by David Leitch, the director of said film, but I wont hold any of its differences against it. The story follows Lorraine Broughton (Charlize Theron) who is sent to Berlin to eliminate a crime ring with the help of David Percival (James McAvoy) with whom she forms a difficult alliance. The star of the show is undoubtedly the action, similar to Wick the action sequences are heavily stylised, brutal, bloody, and very entertaining. Theron is great in the role and sells her tough heroine character immensely well. There is a good implementation of a great soundtrack that isn’t too jarring and works its way into the film naturally. But narratively Atomic Blonde fails to deliver on an overly complex and entirely uninteresting plot that sucks the life out of a number of sequences. 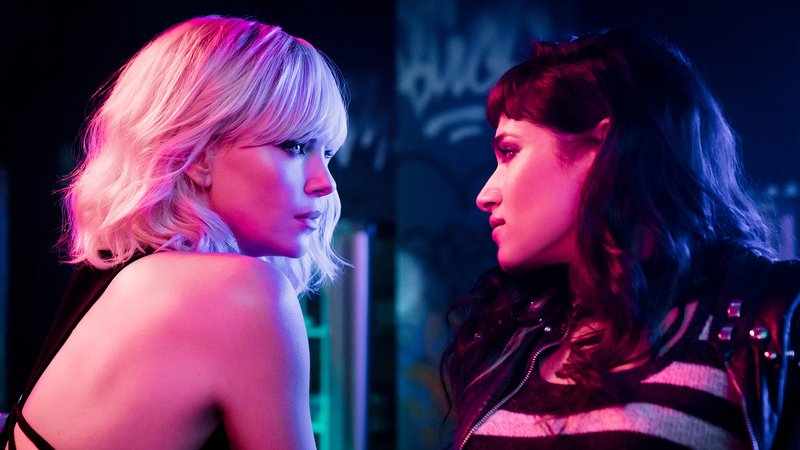 In comparison to John Wick this is a much more plot heavy narrative with a lot of moving parts and is much more than just one man (or woman) vs the world. That being said, I liked the approach initially, it set things up in a way that looked to be heading in a more original direction and not just a rehash of Leitch’s previous film. But it goes very deep into the organisations on both sides of this underground warfare in Berlin, whether it be the KGB or MI6 we go into detail on what each party wants and how they are planning to obtain this McGuffin. I found it really hard to enjoy following this political/criminal plot a lot of which is just rehashed from other espionage plots in which there are issues of spies and double agents and it plays out more or less how you’d expect. What I did enjoy though is any time the plot goes further into Lorraine’s past, personality and relationships as it gives her more depth and allows you to have a stronger connection with her than you could with Wick. It strips back the ruthless assassin side of her and makes her seem more human whilst still not taking away from her badassery. So sometimes simpler is better, sometimes it’s worse….. here I feel it would have been better.

The action is as you’d expect just straight up incredible. There is plenty of great fight choreography that changes with the environment each sequence takes place in, making the most of the location specific objects in the scene. It is very Wick-esque but Theron brings her own fluidity and style to the scenes giving them a hint of flavour that makes them her own. The action is very stylistic and shot to near perfection with many unbroken shots that effectively suck you into each and every action scene. For instance, there is a fight sequence that begins in a stairwell and lasts 7 whole minutes, it is impressive due to how it is shot and edited to look like one continuous take and I love when a film can pull that feat off effectively with no (obvious) cuts. I mentioned the soundtrack which is very 80’s themed and the chosen songs do fit with the tone of the scenes they appear in, most of them are integrated very well and fit naturally with the scene but some are a little jarring. It’s momentary and as the song plays for a few seconds you get used to it but a couple times the introduction of a familiar song did take me out of it.

As for the rest of the roles I liked most of what those actors had to offer with the screen-time they got. Actors such as John Goodman, Toby Jones, James Faulkner, and Bill Skarsgard were good but they don’t really do much over the course of the film to draw any attention to them. I liked James McAvoy as a more layered character who is kind of a dick and clashes with Theron in a number of scenes. Sofia Boutella is also in this film and although she has a limited role she is important to exploring and developing Lorraine’s character and has one hot scene I very much appreciated for its importance in the plot but also the content. Ever since her appearance in Kingsman: The Secret Service (2014) she has been typically cast in ass-kicking roles so it’s good to see her in an ass kicking film where that isn’t the focus of her character.

So in the end I would say Atomic Blonde is just ok, the action is fantastic from beginning to end and there are absolutely no points lost there. Charlize Theron is great in the lead role and kicks a tonne of ass but also delivers on the drama when required. But the fact that the plot is as flat and uninspiring as it is makes a lot of this movie quite boring. I didn’t care about the spy/espionage plot and the deeper it went into uncovering some secrets the less I cared and this led to lots of downtime where you’re just waiting for the next action sequence. So yes the action here is worth experiencing but whether it’s worth having to power through the more narrative focused scenes is debatable.