If Star Wars can have its own holiday special then why can’t Frozen? Personally I enjoyed almost every minute of this short, but as it turns out, the internet doesn’t feel the same way. The majority of movie-goers almost definitely went to the cinemas to see Coco and were instead greeted by a 21 minute Frozen short that many probably weren’t expecting or dreading. But on the other hand I went primarily to see this short and Coco was like an added bonus. Olaf’s Frozen Adventure is quite good, it brings back our favourite Frozen characters for some short stints here and there and overall does capture the tone of Frozen and blends in some holiday spirit. Theres a bit of humour in there, most of which works, some of which not as much but still enjoyable nonetheless. Most importantly we are treated to some new songs and a new holiday centric story that will temporarily satisfy Frozen fans as they wait for Frozen 2.

This story puts Olaf in the spotlight as he goes around Arendelle looking for some holiday traditions that Anna and Elsa can adopt as it’s their first Christmas since opening up the gates. Being a short there isn’t really much more to it than that, it’s a simple problem and solution setup that gives the characters something to do and instigate new opportunities to break out into song. The songs (although not as instantly memorable as those in the 2013 film) I thought were fine, there is obviously the headline song that will get the most attention and then a couple of minor songs that were pleasant to watch. There is a good amount of humour injected here and there and most of it works in the vein of the comedy you’d expect from a Frozen film and it’s quite funny. A few jokes are very obviously there to gratify the young audience and I’m fine with that. 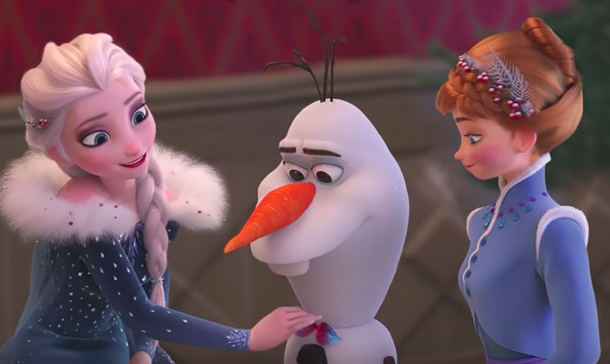 But as much as I very much enjoyed watching this simple and safe short, there is no denying it exists solely to sell more toys, dresses, and songs. It tries to throw in a brief emotional spin that in a feature film would have worked but here as everything moves along so fast it comes and goes and before you know it they’re singing again. The performances are just as great as you’d expect them to be and this short further proves that Idina Menzel and Kristen Bell singing together is straight up incredible.

Other than that there really isn’t much else to say about this, there isn’t a lot to it other than curing people’s thirst for Frozen content until they deliver on the sequel. It has a simple plot, goes exactly how you expect it to, you get a few laughs here and there, some new songs to listen to and I didn’t really expect anything else. The negative reactions to this short I don’t think are about the content of the short itself, I believe most of it is coming from the fact that people who probably don’t like Frozen are being roped into sitting through 20 minutes of it. Now I understand where these people are coming from but I mean, no-one is stopping them from waiting outside the theatre until it’s over…. but if people can complain, they most definitely will.