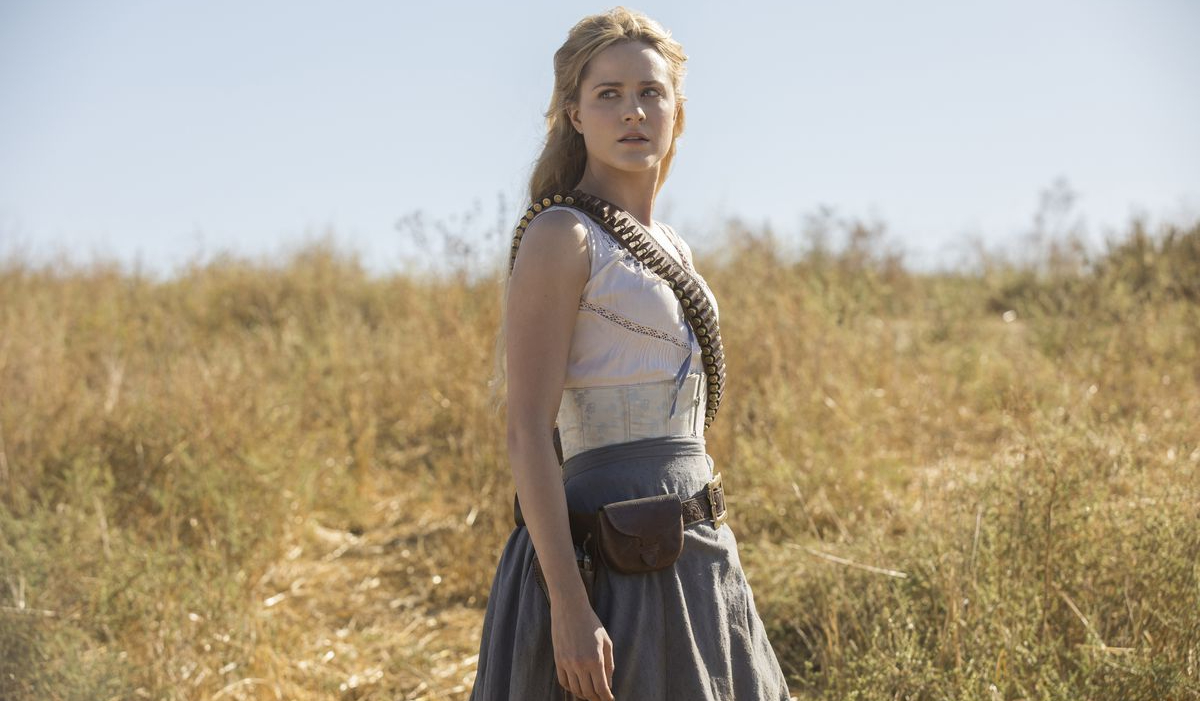 Westworld is finally back and season 2 kicks off roughly where season 1 left us; with the beginning of the hosts’ uprising, but in true Westworld fashion this episode takes place over 2 timelines. This episode titled “Journey Into Night” had its work cut out for it as the season 1 finale is a tough one to follow due to how it unleashed chaos and threw the series in a completely new direction. And for the most part this episode’s core purpose is clearing up where our main players are after shit turned sideways last season. In the wake of Robert Ford’s (Anthony Hopkins) death and Dolores’ (Evan Rachel Wood) newfound consciousness the tides have turned and now the guests are just as killable as the hosts. This episode follows a few groups of characters over the two timelines, one moments after the uprising and one set two weeks later, so lets break down exactly what is going down in Westworld.

The episode opens with an interesting scene between Arnold (Jeffrey Wright) and Dolores happening prior to the opening of the park, a timeline we saw quite a bit of in season 1. In the interrogation scene Arnold expresses that he is frightened of what Dolores might become as she is learning and developing very quickly. Now it’s uncertain exactly how long before his death this scene takes place but it foreshadows exactly what we see with Dolores in the episode. But can we also take a second to note that this scene is actually presented in a different aspect ratio to further indicate that this is taking place well in the past…. how nice of them to do such a thing. 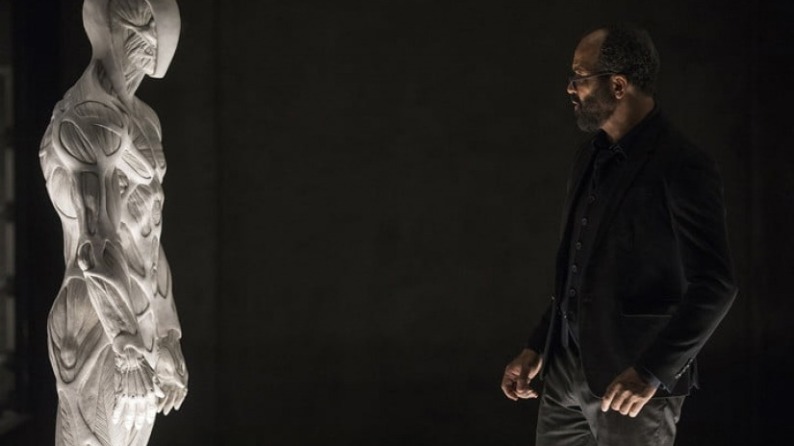 Bernard and Charlotte Hale (Tessa Thompson) are two of the first characters we see who managed to survive the massacre and we follow their story from moments after the uprising. We meet them amongst a small group of guests who are all hiding and trying to survive long enough to find a way out. We also see that Bernard’s hand seems to be shaking, something we’ll soon learn is probably due to the fact that he shot himself towards the end of last season. The rest of their group falls victim to a clever trap placed by the hosts and Bernard and Charlotte make their way to a hidden exit to the park it seems Bernard isn’t aware of but Charlotte is. This underground room which introduces us to Drone Hosts it seems might have been being used by Charlotte, Theresa, and/or other Delos members in their plan to smuggle information out of the park.

Here we learn of the journey we will probably see Bernard and Charlotte undertake in this timeline throughout this season. Charlotte tries to set up an extraction but the people over at Delos won’t send help until they receive the host containing data from within the park that they failed to send last season. That host is revealed to be Dolores’ father Peter Abernathy (Louis Herthum) so it looks like their mission for now is to track him down. In this sequence we learn that Bernard is in some serious trouble as a result of his self inflicted gun wound and is experiencing “critical corruption”. He gives himself a transfusion of sorts and rids of the symptoms for now but this will almost certainly play a major rile in the season. William also survived the beginning of the uprising and he seems to absolutely loving this new Westworld in which the stakes are real. His journey this episode is short and doesn’t really tell us much about where his character is heading until he comes across the young Robert Ford host from season 1. Before William kills the young host, he informs William that a new game specifically for him has begun in which he will need to find a way out of the maze. It’s still unclear exactly what this new game has in store for William but I’m sure we won’t have to wait long for details.

Right after she started a war, along with her newfound consciousness Dolores seems to be running things in the park as with Teddy (James Marsden) at her side she’s calling all the shots. It’s very clear that she is waging a war against the guests and it seems also the hosts that weren’t part of Ford’s new narrative. Dolores might be able to foresee her overall goal and journey very clearly but Teddy might not be on the same page as it doesn’t seem like he’s completely on board with Dolores’ plan.

The last we saw of Maeve (Thandie Newton) was when she abandoned hew plan (scripted or unscripted) to leave Westworld and ventures back into the facility with the hopes of finding he daughter from another life. And when we catch up with her she is on that same journey which sees her come across douchebag Lee Sizemore (Simon Quarterman) whom she saves from being strangled to death. Maeve then catches up with Hector Escaton (Rodrigo Santoro) and enlists Lee as her guide as they prepare to venture back into Westworld to find her daughter, but not before making him bare all. 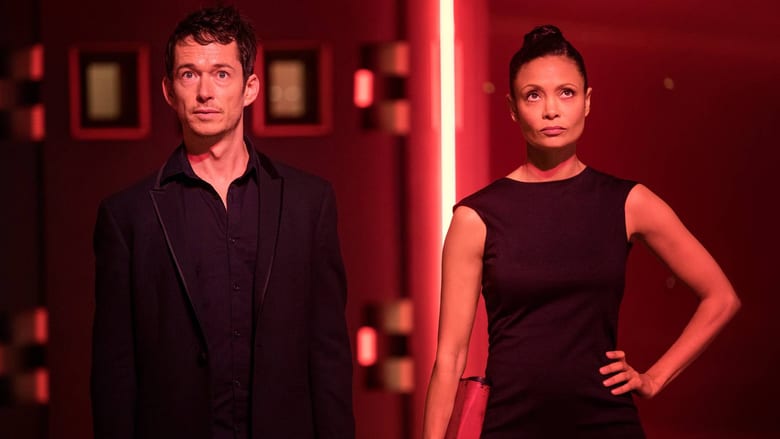 The only storyline that takes place in the present timeline this episode is that of Bernard whom we first see waking up on a beach two whole weeks after the uprising. As a result of his battle with “critical corruption” Bernard is still experiencing the shakes and can’t seem to remember what has happened since the incident last season. We get a flew flashes before he wakes up where we see Bernard with Dolores, with Peter Abernathy, and firing a gun at people offscreen. The context of these flashes are unclear but my guess is that they take place in the last two weeks and we’ll get some context throughout the season. In this timeline the humans seem to have arrived in Westworld with soldiers and under order from Karl Strand (Gustaf Skarsgård) have begun reclaiming some of the land, killing off any hosts they have found. We also spontaneously learn that Ashley Stubbs (Luke Hemsworth) somehow survived his altercation with the rogue hosts towards the end of last season… ok then, sure.

Some of the potentially major mysteries of the season are derived from the last few scenes in this present timeline. Karl, Stubbs, and Bernard track host signals where they find a large expanse of water that it seems nobody was aware of filled with hundreds of dead hosts. Amongst the dead hosts is Teddy himself, so if what we see is to be believed it’s that at some point in the two weeks between these timelines he dies. But that isn’t the biggest reveal here, Bernard manages to recall that he is the one who killed all of the hosts in the water, now whether he killed them himself or he did something that led to their deaths is unclear but I can’t wait to find out more. In this sequence we also learn that there are still hundreds of guests in Westworld that are unaccounted for.

But before all this in a small moment a dead tiger is found in Westworld, now as there are no tigers supposed to be in Westworld this is very clearly from another park and the question that arises is just how exactly the tiger ended up in another park.

I don’t know about you but I loved this episode and the return of Westworld and cannot wait to see what this season has in store for us. This episode was largely a lot of cleanup from last season and it executed it all fantastically. We still don’t know what happened to Elsie Hughes (Shannon Woodward) but there are plenty of episodes to go. If what we learn in this episode is any indication, we are in for much bigger things and we’ll almost certainly be venturing to the other parks.