Season 2 Episode 3 of Westworld titled ‘Virtù e Fortuna’ is a bit of a change of pace for the series, there is still a bit of jumping around in terms of characters but this episode largely hinges around one key moment which sees a number of characters involved. This is the first episode of the season in which we haven’t gotten any new content with William, and Ed Harris‘ absence is felt as his journey is the most intriguing right now. But this episode also marks the first large scale action sequence of the series taking place at Fort Forlorn Hope.

This episode had a surprise opening where we are greeted by a new Delos park that isn’t Westworld and still not the much anticipated Shogun World. We are dropped right into a world bearing an environment indicative of colonial India where it looks like the main draw to this park is hunting in the exotic jungle. We are immediately introduced to two new guests, Grace and Nicholas played by Katja Herbers and Neil Jackson respectively. We first get a fun little scene in which we see the moment these two guests try to make sure that they’re each dealing with another real person. It’s good to see some people in this world still care about interacting with real people. But their exotic getaway doesn’t last long as the hosts’ revolution catches up to them resulting in the swift death of Nicholas. This confirms that the hosts are revolting across all of Delos’ parks and not just Westworld and also it confirms the exact time period we are looking at.

After Grace escapes a confrontation with a host she happens upon a Bengal tiger which chases her beyond the park’s border. The tiger lunges at Grace sending both of them plunging into the water where they later wash ashore in Westworld. The tiger doesn’t survive the journey as we know from seeing its dead body in the season 2 premiere but Grace does survive and climbs onto the beach. She very quickly runs into three members of Ghost Nation and it’s unclear what happened to her next. The biggest question that arises from Grace’s scenes is what exactly is she hunting for? It’s clear she’s not in Raj World just hunting the wildlife and I’m sure we’ll learn more in the coming episodes.

What I’m also thinking is maybe we see Grace come across Stubbs (Luke Hemsworth) at some point and that’s how he escapes the clutches of Ghost Nation. I guess we’ll have to wait and see if this is how it plays out.

We spend a short amount of time in the present with Strand (Gustaf Skarsgård) and Bernard (Jeffrey Wright) where they make there way into the management area of the park. It is here we get confirmation that Charlotte Hale (Tessa Thompson) has survived the two weeks since the host revolution but has still not been able to secure Peter Abernathy (Louis Herthum). She seems to be slightly skeptical of Bernard as if she’s questioning which side he’s on so it’ll be interesting to see what has happened between them in the past.

Back with Bernard and Charlotte on their search for Peter Abernathy they find him being held captive by Rebus (Steven Ogg) alongside some guests. They devise a plan which sees Bernard capture and reprogram Rebus to be incredibly compassionate and thus he goes and frees all the captives allowing Bernard and Charlotte to take Peter. I really hope we get more compassionate Rebus in this season. But their escape doesn’t last long as the Confederados take Bernard and Peter prisoner whilst Charlotte escapes on horseback.

Now this is going to be covering a large chunk of the episode because a lot goes down at Fort Forlorn Hope concerning Dolores (Evan Rachel Wood), Bernard, Charlotte, Peter, and Teddy (James Marsden). Dolores marches on the fort and joins forces with the Confederados simply by offering them the humans’ automatic weapons. Looks like she’s now got herself quite the army. Next up we get ourselves two character reunions when it turns out that the Confederados who captured Bernard and Peter bought them to Fort Forlorn Hope. I like that Dolores still has retained some of her farmers daughter persona and isn’t entirely the murderous Wyatt she’s been showing in recent episodes. She tries to have a heartfelt conversation with her dad but he seems to be bouncing between a number of different narratives from his normal loop to one in which he is trying to get on the train out of Westworld. Dolores reunites with Bernard who she also now understands is designed off of Arnold as she is now ‘awake’. She wants Bernard to help fix her father’s brain… if anything Bernard’s brain is the one that needs fixing. Bernard manages to decrypt the locked information that Peter was holding and he seems pretty shook by the revelation.

Outside the fort Dolores and the Confederados are preparing for war and then a smallish army of soldiers attack. It’s a pretty engaging action sequence although the only thing that would’ve made it better is if there were some major characters in the line of fire but there’s no way any of them would be dying this early into the season. Whilst the two sides are going at it at the front of the fort Charlotte is leading a small group of soldiers through the back of the fort which allows them to sneak in and capture Peter. Interestingly Bernard chose to hide when the soldiers came to take Peter, is it because he didn’t see that they were on his side or because of what he saw in Peter’s code? He tries to escape moments later but is knocked out by Clementine (Angela Sarafyan). But then Dolores notices that her father is being taken and jumps into action taking out a couple of soldiers but not before Charlotte can get away with Peter. She announces her plan to go to Sweetwater next as there seems to be something there that she needs.

Meanwhile in the battle Dolores is up to her backstabbing ways as she locks the Confederados out of the fort using them as bait to draw the Delos soldiers closer. When they get close enough she orders Angela (Talulah Riley) to set off the dynamite which seemingly wipes out all of the Delos soldiers. And with that Dolores wins her first major battle, but there’s a war coming. After the battle Teddy is ordered by Dolores to execute the remaining Confederados but in a change of heart he disobeys her orders and lets them go. This is the first moment that Dolores seems genuinely disappointed that Teddy isn’t adopting her murderous methods and it leads me to believe that maybe Dolores is the one who is responsible for Teddy’s eventual death. 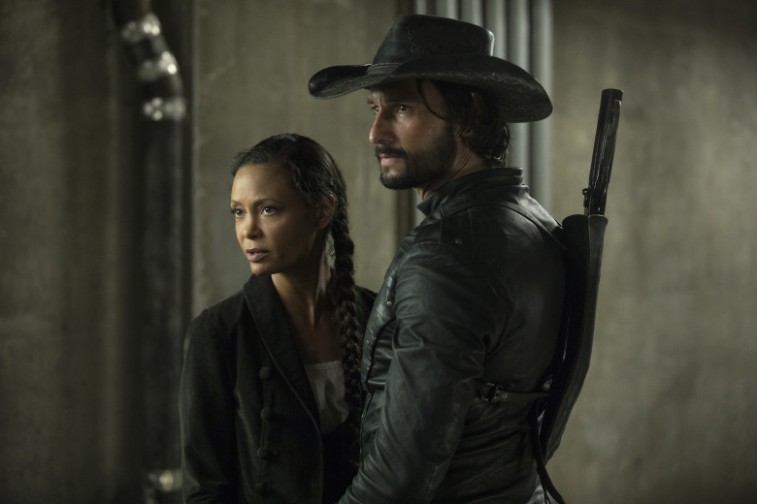 Maeve (Thandie Newton) is very much still focused on finding her daughter throughout this episode with the help of Lee (Simon Quarterman) and Hector (Rodrigo Santoro), and on they way she comes across the Ghost Nation. After she realises they are out of her control she makes a run for it, retreating underground. Lee has a cool moment with Hector where whilst he is professing his love for Maeve, Lee is able to predict exactly what Hector is about to say indicating that he may not be as independent as he thinks he is, still resorting back to his programmed dialogue. Maeve continues building her search party by bringing Armistice (Ingrid Bolsø Berdal), Felix (Leonardo Nam), and Sylvester (Ptolemy Slocum) into the fray, all of whom we are seeing for the first time this season.

The end of the episode provides one of the more exciting moments of the season so far which sees Maeve and co. venture to the outskirts of the park where it seems to be snowing. Lee digs through some snow to uncover the decapitated head of a samurai clearly belonging to Shogun World. Right before the episode cuts to credits a sword-wielding enemy sprints towards Maeve and probably gets shot by someone. But we’ll have to wait for next week to find that out.

This episode is still a great one as it gave us a glimpse at two more of Delos’ six parks and introduced us to an intriguing new character in Grace but the heavy focus on this battle at Fort Forlorn Hope is a drastic change of pace. I liked the majority of everything revolving around Dolores and the big battle but it wasn’t quite as epic as I hoped it’d be. I am a little worried about where Dolores’ story is heading in the short term because we know her main goal is to eventually get to the valley beyond and that’s cool. But right now I’m starting to lose a bit of interest in her character because her murderous behaviour might start to get a little repetitive. If she spends every moment marching on bases, killing, and moving on it might end up coming across as filler whilst we wait for her to get to her destination. I have all the hope in the world that Westworld will throw something into the mix to keep her story engaging but we’re just going to have to wait. I do hope we get a lot of Ed Harris’ William in the next episode because his journey is definitely the biggest thing this season has going for it aside from the new parks.