Solo: A Star Wars Story is the newest standalone Star Wars adventure that sees us following a younger Han Solo (Alden Ehrenreich) who embarks on a daring mission through a criminal underworld encountering some new friends along the way. It was always going to be an uphill battle for Solo as its success relied on casting an individual who could replicate the spirit of Han Solo without doing a Harrison Ford impression. But where I was initially a little skeptical on whether Alden could pull it off I now feel like he is a great choice to fill the iconic role and bring us more Han Solo going forward. Despite some production issues, director Ron Howard and writers Jonathan and Lawrence Kasdan have righted the ship and delivered a fun fast paced Star Wars adventure with unique action sequences, strong characters, and a more grounded look at this corner of the galaxy. The film does still have its issues but it’s an overall fun ride that I believe both hardcore and casual fans can get a good kick out of.

Lets start off with the big one, if Alden doesn’t work as Han, this entire movie plummets and ensures we never see the Han Solo character on the big screen again. Thankfully this isn’t the case here as over the course of the film Alden grows into the role of Han and makes this younger version his own. It’s a little bit of a rocky start at first and I feel that’s a combined result of him getting a feel for the character and also myself adjusting to a new face. But as he goes through this adventure meeting new and familiar faces, the cynical and sarcastic nature of Han starts to shine through and he really does feel like the scoundrel we all know and love. And this is bought out predominantly through his many interactions with both Chewbacca (Joonas Suotamo) and Lando Calrissian (Donald Glover) who have extensive roles in this story. They are the two strongest character relationships in here as so many fun light-hearted moments come out of this crew bantering with each other and it all fantastically lays the groundwork for their respective futures. Donald Glover is the standout of the film as the charming smuggler Lando as from his first scene he instantly embodies the character and is radiating with the same energy that Billy Dee Williams originally bought to the role. The prospect of a possible Lando standalone film is very exciting now considering how strong Glover is in the role.

As for the rest of the supporting roles Woody Harrelson is pretty strong as Tobias Beckett and brings to life this key figure in Han’s life who gives him his first shot. They have a dynamic that develops with time with some cool rewarding moments. Emilia Clarke plays Qi’ra, Han’s love interest and where I wasn’t entirely invested in their relationship her character does have a strong place in the story beyond just being the love interest. Paul Bettany makes his Star Wars debut as the villainous Dryden Vos, ruthless leader of the Crimson Dawn crime syndicate, and he’s a serviceable villain who is good for the limited screen-time he has. He’s not going to make a large impression of the Star Wars universe but he’s a good villain who works for this story. The droid who accompanies Han and co. on their mission, L3-37 played by Phoebe Waller-Bridge, is more frustrating than anything in here. I didn’t like her personality and the attempt at humour through this character really didn’t work.

Solo delivers on a number fun exciting action sequences that feel incredibly unique in contrast to what we get in the saga films because it’s a much smaller story being told. Gone are the lightsaber duels and large scale space battles and in their place there are these smaller action set-pieces and chase sequences that are thrilling and fun in their own right. And there is variety here too in the action that shows off the gritty nature of this criminal underworld and it’s all executed incredibly well. The movie isn’t void of its issues though and I feel like it doesn’t start off all that great, it takes time to find its gear and in the meantime is a bit of a rocky kickoff. The pacing is off and feels like it’s jumping through the first act a little quick making it hard to get fully invested early on. Going into the second act it all starts to fall into place, the main story begins to take shape, the main players are all introduced and it becomes a thrilling Star Wars adventure that does hold some surprises here and there. 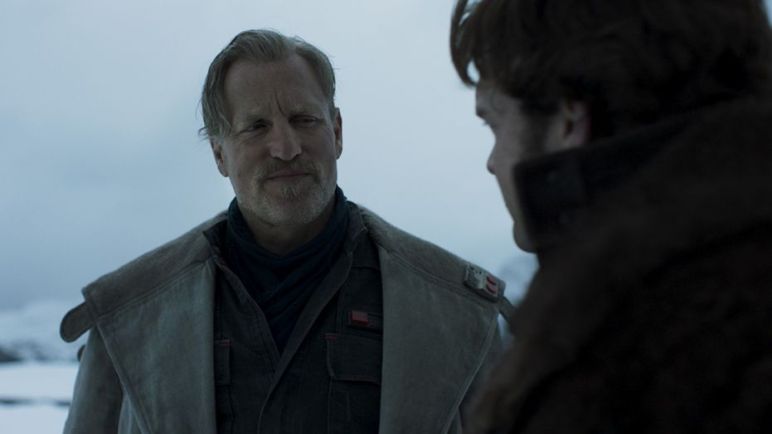 So, in the end Solo: A Star Wars Story is another strong entry in the ever expanding Star Wars franchise that has a much smaller grounded story focusing on Han Solo and his journey through a dangerous criminal underworld. The story as a whole is fun and engaging once it finds its pace after the first act, and the crew we follow have a number great interactions and relationships that are fun to watch throughout. There’s enough in here for the Star Wars die-hards to get enjoyment out of it and also enough for casual fans to enjoy as a thrilling action adventure.