Slender Man is based off online stories about the titular supernatural being whose fame was born 9 years ago and died about as far back. In the film, a group of girls decide to summon the Slender Man to prove he doesn’t exist, but when one of them disappears all hell breaks loose. 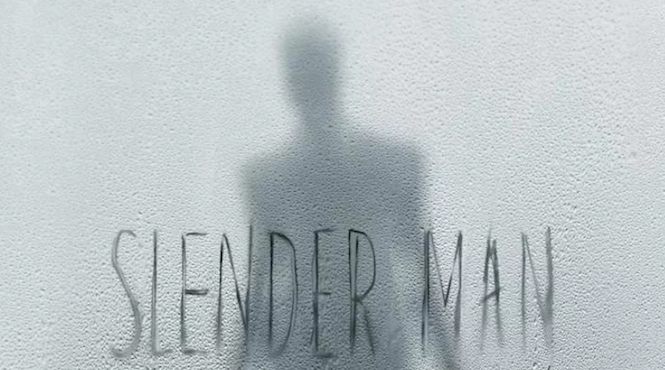 Find a comfy seat, settle in, and try not to fall asleep as Slender Man is so thin there’s barely enough substance to keep you awake. Nothing about this past the 15 minute mark is at all engaging. It starts off quite well where it does a fine job introducing its protagonists, setting up the legend behind the Slender Man character, and had me keen to see where it ends up heading. But where it goes isn’t scary, suspenseful, or even barely interesting… it’s a straight up bore and going into the third act I was fighting to stay awake. It progresses so agonisingly slow and the occasional attempt at a horror sequence rips away any suspense as oppose to introducing it. There really isn’t much variety to the horror sequences either, one or two moments are unique in that they’re not going straight for the jump-scare but rather the presence of something creepy in the background.

As time goes on and the Slender Man starts becoming more physically involved in the horror sequences it becomes even less scary. It’s one of those situations in horror where I feel like a less-is-more approach would have worked much better in generating scares. Any time it looked like it was starting to build suspense it completely ruins it with a predictably timed jump-scare or by simply showing the Slender Man which completely took me out of the film every time.

I want to highlight the editing here which is at times absolutely shocking and also the basic progression of the story that at times didn’t make sense from scene to scene. Some of the editing and scene transitions are noticeably dreadful and jarring to the point where I couldn’t tell what I was watching in some action/horror sequences because of jarring rapid cuts. And it’s not just the editing within sequences that’s awful, it genuinely feels like at times entire scenes are missing as it cuts from one location to the next and I’m straight up lost. For instance, as I mentioned in the premise a girl goes missing, when this happens in the movie one second it’s day time and she’s there and then in literally the next scene it’s late afternoon and she’s now missing. It took me a bit of time to gather what had happened and it’s not the only transition that is dreadfully executed. And then I did a bit of research and found that Bloody Disgusting is reporting that major scenes were cut from the film by Sony/Screen Gems in fear of backlash to their gruesome nature.

As far as the performances go, none of them really stand out as being any good. The four lead teens are played by Joey King, Annalise Basso, Julia Goldani Telles, and Jaz Sinclair and none of them really make an impact. Annalise Basso is the one I’m most familiar with as she was great in both Captain Fantastic (2016) and Ouija: Origin of Evil (2016). However she really isn’t given much to do and I’d say is wasted in the story. Joey King I didn’t really enjoy in here, she didn’t really sell me on the situations her character was in, and this only adds to her questionable year with her role in Netflix’s The Kissing Booth which isn’t good in the traditional sense. Julia Goldani Telles I’d say contributes the most to the film in that I found her character at the very least slightly engaging and at times was rooting for her specifically to succeed. She sold me the most on the horror of some sequences so I guess there’s one positive.

I wouldn’t suggest Slender Man to anyone, even if you were a fan of the legend 8 years ago this doesn’t offer much content to scare you and is ultimately severely disappointing. There’s a real lack of suspense and terror in the film with only the first 15 minutes being effective and a very small handful of scenes that followed actually bearing a tense nature. Watching this is a waste of time, time that could be spent towards an actually good horror movie that’ll scare you as oppose to putting you to sleep.