American Vandal, Netflix’s mockumentary series that took everyone by surprise in 2017 with its perfect blend of dick-drawing satire and genuine true-crime intrigue is back and this time the stakes are through the roof.

American Vandal has returned with a bigger production value, larger scale investigation, and an overall more ambitious second season which trades in the more tame dick-drawing of the first season for a literal shit-storm. The season sees the return of Tyler Alvarez and Griffin Gluck as the leaders of the investigation Peter Maldonado and Sam Ecklund but as expected includes an entirely new location and cast. Jimmy Tatro‘s performance was my favourite element of the first season so I was sad to know he wouldn’t be returning (for obvious reasons), however the new cast of characters contains some absolute gems. DeMarcus Tillman (Melvin Gregg) and Kevin McClain (Travis Tope) are the two characters in here who I found the most thoroughly entertaining to watch throughout the season and provided the most laughs in ways unique to their character. The overall cast of characters is very diverse this season and despite there being so many to keep track of they are all remarkably memorable through the way the series sets up and develops them through the episodes. The character-specific humour is great but the majority of the funniest moments come through the cleverly written dialogue.

The series rides this very fine line with the fantastic dialogue where it delivers a number of jokes and humorous moments through there but never strays from the overall serious tone. The subtle placement of shit-related puns in the dialogue never failed to make me laugh and the fact that every stupidly humorous line is treated as seriously as every other line is what makes the series so damn enjoyable.

American Vandal is a fantastically written series due to how it manages to tell this entirely fabricated and straight up ridiculous story with a constant sense of realism and has you 100% invested in the mystery at hand. It follows a similar structure to the first season where it gives you snippets of information to lead you in certain directions only to throw you curveballs and twist up the game with each successive episode. It continuously builds up suspense with each instalment and does an incredible job at really heightening the stakes of the mystery going into the final stretch of episodes. Much like the first season I found myself laughing at the overall absurdity but becoming increasingly more invested in the story and genuinely wanting to find out exactly who the turd burglar is. But it isn’t all just jokes and subtle shit-references because there is a decent amount of commentary on social issues in here that is well integrated into the story. It’s not jarring and it makes sense to be in here being a mockumentary it can disguise itself as part of the mockumentary in the show which works really well.

Unlike the first season, this eight-episode run didn’t grab me right off the bat. The first few episodes I definitely enjoyed although I didn’t feel the urge to immediately continue as strongly as I did during the first. My desire for the mystery to be solved didn’t kick into gear until a few episodes in when some drastic developments started to be made. It may have something to do with the earlier episodes of true-crime series’ typically not being as focused or that they just moved a little too slow. 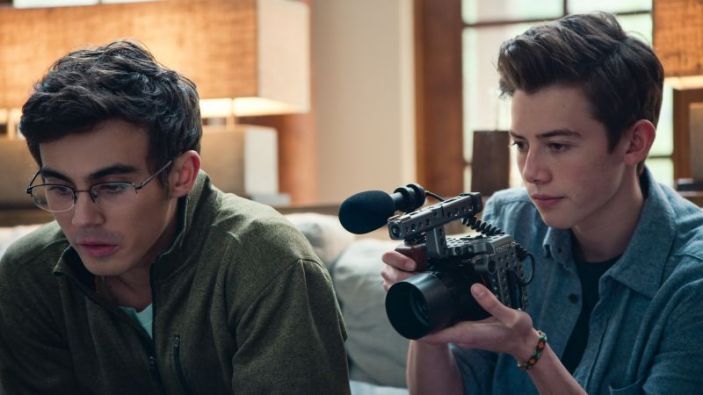 Despite being a much more ambitious project than what we saw in the first season I don’t think this is a step up but rather a slight step down. It captured the right tone, structure, and style of humour that the first season offered however I feel like season one was a little tighter and executed everything marginally better. But there is still a tonne of enjoyment to be had with this season as the characters are all so great and real and also the performances are just fantastic. The fact that these young actors can get through some of the lines in here without completely cracking up is impressive to me. Once again American Vandal has come and given us a true-crime mockumentary that you can laugh at and be genuinely invested in that I hope is an indication that a third season is on the cards.