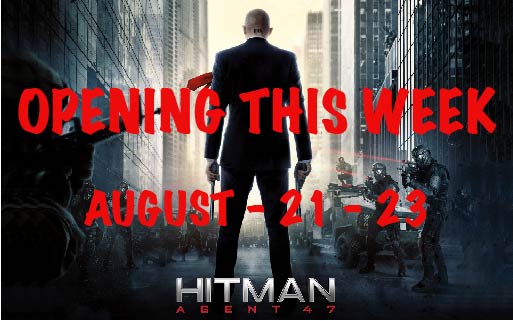 This week we have three fairly big releases that i think all have a very good chance to make an impact on the box office. The three films are ‘Hitman: Agent 47’, ‘American Ultra’, and ‘Sinister 2’, and all three are different genres so would most likely attract very different audiences. Well lets get a little more specific into each film below.

Firstly lets start off with the one that may be the most well know of the three ‘Hitman: Agent 47’. This is i believe the second attempt at adapting the popular video game series of the same name into a feature length film. The games centre around a Hitman who, well, kills targets, its all self explanatory, and that is what the previous film and this film focus on. This film has nothing to do with the last adaptation of the game series and seeing as though the last one was not reviewed highly at all you would expect that to be the case. As for this adaptation i think it has some promise to be an alright film. I have to say i thought the trailer looked alright, borderline good, it looked to have some fun action set pieces and if the film can do the actions right in a fun and entertaining way this movie will have potential. Being a video game movie, if history is to repeat itself this will be a very bad movie but you never know, this could break that trend. Anyway here is the trailer to judge for yourself.

Next up we have a horror sequel, i know, the sound of that description already turns you off, but this time it is of a horror film that i thought was one of the better ones in recent years called ‘Sinister’. This time it is ‘Sinister 2’ that has arrived to hopefully scare us into a never ending nightmare. The first Sinister was one of the scariest modern horror movies and that was largely due to the focus on using intense creepy sequences to scare the crap out of you, it did have its fair share of jump scares but they didn’t bother me like they do in other films. The concept was one that may sound and/or appear familiar but i have to say it was a pretty unpredictable film and Ethan Hawke was fantastic in the leading role. Now this film is given the difficult task of trying to make something better without playing the same beats as the first film. It focuses on an entirely new cast that i hope are just as interesting as the one in the first film. The trailer was creepy enough for me to be interested but see or yourself if the trailer does its job scaring you.

Last but not least we have ‘American Ultra’ which is an action comedy or as the trailer describes it; a stoner comedy, starring Jesse Eisenberg and Kristen Stewart. The only major release this week that is not a sequel or based off an existing property but the trailer has been pretty well received so i think it will put up a pretty good fight. Jesse Eisenberg has had some pretty great roles so he has shown that he can act and do comedy really well and Kristen Stewart i think still has plenty of potential despite people knocking her down for the Twilight films. The two big names i think will be the driving force in getting this movie into the Top 5 at the box office. Check the trailer below to see if this is the film for you.

Well that is all for this week’s films that are opening, three different films to choose from, which one will you be seeing? Comment below and let me know your choice.