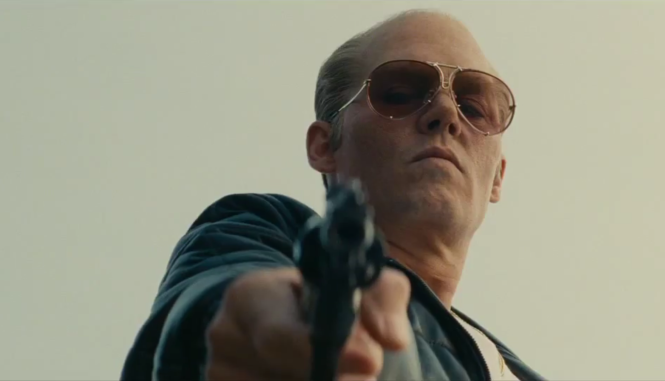 Black Mass is a Biopic, a Crime Drama, that follows infamous crime lord James “Whitey” Bulger and his involvement with the FBI during the 70’s and 80’s that led to him becoming one of the most notorious and violently dangerous mobsters in history. This for me is one of the films that is leading the Oscar race in multiple categories. Maybe not for Best Picture but as of today, this film is a strong contender for Best Actor, Best Supporting Actor, and i reckon even Best Cinematography. It was an incredibly gripping story that was told, it started off a little slow but once it found its feet around 30 minutes in it just got better and better right to the very end. There were occasional moments where it started to look like it wasn’t really going anywhere but it quickly gets back on track. It was intense and such an interesting and surreal story that i really knew nothing about. Like i said, there were a couple of moments where it was beginning to lose me a little but there were so many big events packed into this film that if you walked out for even a minute you would miss something. And that just shows a great adaptation of real life events and displaying them in a dramatic way with a very very dark tone that doesn’t lighten up at all.

But lets talk about the star of the film, the man who elevates this film so much and gets you so engaged in what is going on, the man who is leading the race for the Best Actor Oscar this year…… Johnny Depp. He is such and absolutely fucking talented actor and this is his best performance in a long time and is one of his best ever because he hits it out of the park in this role. Johnny Depp did such a fantastic job at playing this violent, deranged mobster that 10 minutes into the film you completely forget you are watching Johnny Depp. Almost instantly, he completely disappears into the role and then there is no Depp, only James “Whitey” Bulger. He transformed and became this intimidating monster and he really allowed you to see how so many people at the time would fear him and have nightmares about him. An incredible performance and as of today a strong Oscar contender. But why stop there?

If we’re giving away Best Actor Nominations, i thing we should give away a Best Supporting Actor Nomination to the amazing Joel Edgerton. He was so great in this film that it is so hard to believe that even with Johnny Depp in the spotlight he manages to shine almost just as brightly. His character was so much more complex than Depp’s, he wasn’t just crazy, there were so many layers to his character and decisions he has to make and problems he has to overcome that made him an equally interesting character. Just a truly fantastic performance and you cannot help but to be on this guys side for the entire film. Those were the two big guys but then you also had Benedict Cumberbatch, Kevin Bacon, Rory Cochrane, and many more all putting on a show. There were so many great performances and they all made for the best parts of the film.

The cinematography was also amazing, very well framed shots captured the tones of the scenes exceptionally well. So well that it may be in the running for Best Cinematography at the end of the year, but we’ll have to wait and see. Well an intense story that has its ups and downs in conjunction with some of the best performances of the year puts this film in strong contention for some oscars. – 7.9