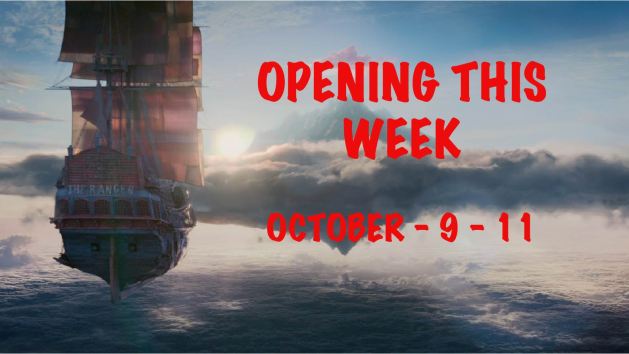 Welcome back to opening this week after a long time missing. This week we have three major new releases and one getting a limited release that i believe is worth mentioning. ‘Pan’ and ‘Steve Jobs’ are the big brand new releases, ‘The Walk’ is expanding out of IMAX theatres and into all theatres and smaller film ‘Knock Knock’ is showing up in limited theatres across the US. So lets not waste any time, here we go with the new releases.

Firstly we have ‘Pan’, another attempt at a live action film that takes place in the mysterious world of Neverland. The film follows Peter Pan as the main protagonist but this film is aiming to show the time before Peter goes and ‘guides’ Wendy off to Neverland, and before Hook loses his hand. It looks like it could be an interesting film, i do think they are looking to go very kid friendly audience so it won’t be too dark and should be a pretty fun movie. You have Australia’s own Hugh Jackman playing Blackbeard as well as Rooney Mara as Tiger Lily and  relatively unknown Levi Miller as Pan. Obviously the standout is Hugh Jackman who could really bring some life into this film if he plays an interesting and not so cheesy villain. The film looks like it could be fun for the whole family so t has a good shot at making some money this weekend. Here’s the trailer below.

Next up we have the other new release called ‘Steve Jobs’, another biopic about the man (Steve Jobs) who changed the world of technology with his Apple company alongside Steve Wozniak. The movie i hope is better then Ashton Kutcher’s attempt at a Steve Jobs biopic that just failed on so many levels. And it looks to be that way as the cast for the film is packed full of talent. Michael Fassbender as Steve Jobs, Seth Rogen as Steve Wozniak, as well as Kate Winslet, Jeff Daniels, and Sarah Snook who was amazing in last years ‘Predestination’. This cast gives me so much faith that this will be a great film. The actual plot of the film is a little different, it is apparently taking place during the lead up to three of Apple’s biggest press conferences over time. So it will be very interesting to see how they deal with the time jumps, but i think focusing on the busiest and most exciting times of Jobs’ life is definitely the right direction to go. Anyway here is the official trailer to check out for yourself.

Next we have ‘The Walk’, another biopic about Philippe Petit, the French man who made it his goal to stretch a wire across the two towers and walk across it. Now this film did get a release last week but it was IMAX only so this is i guess the official release. This film looks like it is going to be intense, definitely one to go and see in IMAX, maybe not if you are afraid of heights though. The trailer alone gives me sweaty palms so i can’t imagine what the actual film will do to me. Joseph Gordon-Levitt tries to put on his best French accent to play this man during the events leading up to his crazy stunt. And where it looks like i will love everything in this film, Joseph’s French accent looks like it will bother me in the film as it has bothered me in the trailers. Hopefully the film is so great that i can overlook that but i’ll have to wait and see. You can see the trailer and French accent for yourself below.

Lastly we have a limited release that i thought was worth mentioning due to the director and it’s star. Directed by Horror/Thriller directer Eli Roth and starring action star Keanu Reeves, this film looks like it could be quite freaky. It is a Horror/Thriller with a bit of mystery thrown in there and it follows Keanu Reeves who one rainy night lets two strange women into his house who later turn out to have not so good intentions. I quite liked the trailer, it was a very weird premise and sounds dumb, but i think with Eli Roth at the helm he could bring some cool thriller elements to the film, similar to those in his ‘Hostel’ film. Anyway i’ll leave the trailer below to check out.

So thats it for another week and the return of Opening This Week. What will each of these films make over the weekend, be sure to check out Weekend Box Office on Monday and see who comes out on top.