As we wait for the day where a good video game movie will fall from the heavens and on to our movie screens, we have to sit through pieces of shit like Hitman: Agent 47. This isn’t just a bad adaptation of a video game, it is just simply a terrible movie. This was a complete borefest from start to finish with a few cool looking scenes occasionally. And to make it even better, it had literally nothing to do with the actual Hitman games, why not just give it some other shitty name instead? By giving it the name ‘Hitman’ most people don’t think of the popular video game, most people think of the 2007 adaptation, and trust me, you don’t want people to relate your new film to that one.

The main problem with the movie was how dull it was, every damn scene was completely lifeless, emotionless and some of the most unexciting stuff i’ve seen all year. Even the action, that is supposed to be fast paced and exciting was terribly boring. Some of it looked cool but thats all it had going for it. When an ‘Action’ film can’t capitalise on the ‘Action’ it is destined to fail, and you have to wonder if these people know how to actually make a movie. Then you look at the director and realise that this is the ONLY FILM HE HAS EVER DIRECTED, EVER, and he hasn’t even been involved in any other films…… WTF? But hey, he’s directed some music videos…….. that counts….. right? You can even see it in the film, the way it is put together is really sloppy, the pace is all over the place, and the whole film is incredibly generic. Even the plot of the film is just terrible, predictable and borrows crap from other films. It wasn’t interesting in any way whatsoever, and oh man the dialogue was an abomination. It was bland, emotionless and almost like they were reading off a prompt on set. You know what this felt like? It was in part just a rip-off of Terminator 2 without the time travel and SkyNet, except in this case everything was poorly executed. 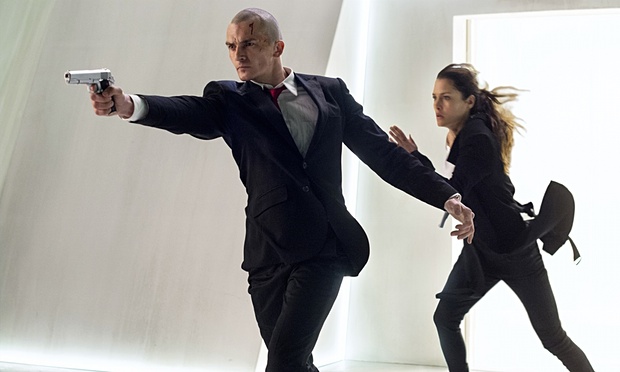 The acting was really, really bad. There was no life at all to these characters, you don’t like any of them, and because of that you aren’t rooting for anyone. I don’t know if “be dull and boring’ was the advice they were given, but if it was then hey, great job guys. The weirdest character has to have been the main heroine, Katia played by Hannah Ware. She had no character arc throughout and wasn’t really developed or introduced in any way that explained her abilities. She also has some random sudden personality change late in the film that was out of no-where and made no sense at all. She has no chemistry with Rupert Friend and when half the movie was depending on that, it really showed.

In the end this movie was dumb, dull and downright boring. There was no fun, no excitement, the action looked kinda cool and i guess was well choreographed but wasn’t entertaining to watch. And to top it all off, it had nothing to do with ‘Hitman’ so this film is just packed with disappointment for everyone. – 3.2/10