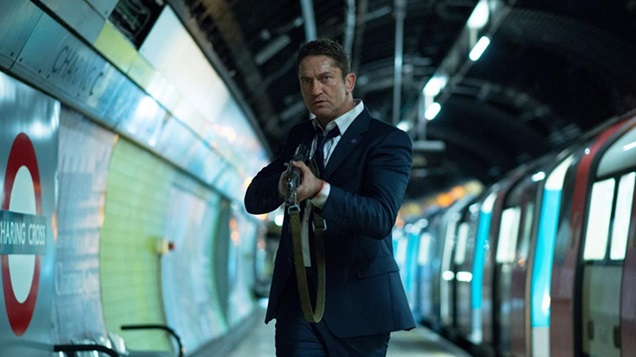 One of the things i love about movies is that sometimes you don’t need compelling character development, or a beautiful use of cinematography to enjoy watching a movie. Sometimes, all you need are guns, explosions, and Gerard Butler murdering the shit out of a group of terrorists to have a shit-load of fun. That’s exactly what this film set out to be, and that’s exactly what it was, and i really enjoyed myself. It is the second film in the ‘Has Fallen’ franchise and all of Gerard Butler, Harvey Dent, and Lucius Fox return to see London turn into the real world version of Gotham. To put it simply, this is a film that you can just sit back and enjoy without having to think too hard about anything. Terrorists are trying to kill the President, so King Leonidas minus his 300 is gonna do something about it.

The film starts off rather slow, and the first 15 minutes are there for setup that isn’t that engaging and does play some minor relevance but it’s over fairly quickly. Once the chaos begins in London this movie pretty much does not stop for anything, the action doesn’t end, right until the end of the film you are seeing nothing but car chases, and gun fights, and i was well entertained right through. There isn’t anything new that you haven’t seen before, it does touch on all the cliche’s in these big blockbuster action films but why it didn’t bother me at all is that this movie didn’t care one bit. It was also pretty cheesy with the occasional one liner in the middle of a fire fight that i laughed at most of the time. In other words, don’t go into this film expecting anything more than mindless fun because you will be disappointed.

So as for being the third film in the ‘The Purge’ franchise….. i mean, the second film in the ‘Has Fallen’ franchise i feel like they accomplished pretty much everything that they set out to do. And hey, on a $60 million budget it definitely made its money back and more, so i wouldn’t mind seeing another one of these films, maybe not without Gerard Butler though. So, anyway, it’s fun go see it.