‘The Witch’ or ‘The VVitch: A New-England Folktale’ is a deeply unsettling, amazingly acted, beautifully shot indie horror film had had me hooked as the suspense and the terror built up to an ending that had me in complete shock as i put together all the pieces of what i had just seen. But before i go on with the review, i need to talk about the Horror genre as a whole and how this film and others give a perfect example of how to save the genre that is progressively turning to shit. 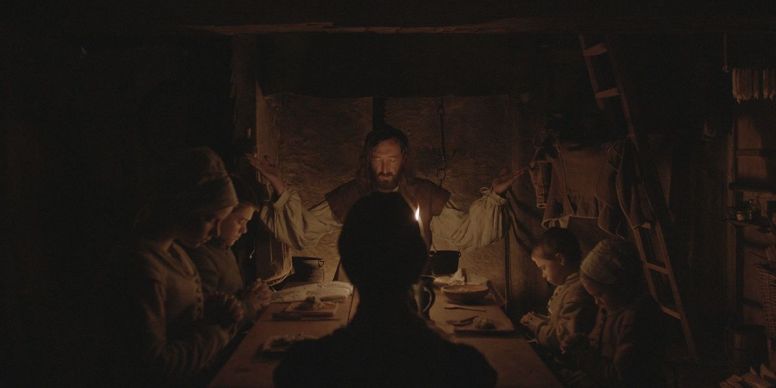 The day in which horror films that treat the genre as more than just a shit-storm of jump-scares and cliches become more popular amongst the general audience than ‘Paranormal Activity 72’ will be a day that i hope i live to see. Because it will be the day where the Horror genre gets new, proper public admiration, and becomes more than just the type of film you see just to get scared by a flurry of loud noises and things popping out from off-screen. Right now, apart from a few gems here and there, the horror genre is largely a complete throwaway. We get 52 exorcism/possession films released every year, 31 found footage cash grabs, 71 films that just don’t understand the concept of horror, and none of them bring anything new or original to the genre, and the amount we are seeing is partly the blame of the studios but mainly the blame of the public. Because if Ouija 2 puts butts in seats and makes $100M on a $5M budget then no shit you are going to get a Ouija movie every year. It comes down to business.

It is a crime that films like ‘The Witch’, ‘The Babadook’, and ‘It Follows’ are largely overlooked by audiences in favour of ‘The Lazarus Effect’ or ‘Exorcism Film #82,345’. The films that take you back to the golden age of horror where it was all about originality, and coming up with unique methods of film-making and storytelling to scare the viewer and have them be utterly terrified for an hour and a half no-one seems to give a shit about. And if your stance is that “well, everything has been done before, so you can’t do anything new”, well then you’re wrong and narrow minded as when something *new* does come out you skip it in favour of the fucking ‘Poltergeist’ remake.

And it isn’t just the indie film-makers who are bringing some hope to the survival of the horror genre, directors such as James Wan, James Wan and ah James Wan have nailed it with revolutionising the genre. I mean, look what Furious 7 did for the genre and what Aquaman will bring to it in the future. But seriously it really is about taking risks, it is about pushing the idea that Horror CAN be better, and that character development, compelling dialogue, and an interesting original plot can be focuses of the film without taking away from the overall scariness of the film. Anyway, thats my rather lengthy rant over, lets get back to the review.

This film absolutely owned its New England setting, utilising themes from English Folklore such as witchcraft, magic, and the devil, but incorporating them in such a way that was utterly genius and terrifying. The visual aesthetic alone gave off a very eery tone and as soon as the film begins you know that this is a very dark and grim time, and when chaos breaks loose, shit really begins to hit the fan. Still scenes of a forest, the landscape, and other inanimate objects, where they gave off a sense of beauty in ‘The Revenant’ here give off feelings of terror and are quite unsettling. And that is due to the combination of some very creepy tones, or geniusly, just complete silence, the utilisation of which most horror films also tend to get completely wrong.

The film notably is incredibly well acted all across the board with Ralph Ineson, Lysa Arryn, and Anya Taylor-Joy putting in surprisingly phenomenal performances. They bring so much to their characters that you believe that these were what real people were like at this time, and the way they sell the reactions to some of the rather weird shit that happens adds that connection to the characters that i was mentioning before. And because you get attached to all these characters for different reasons, when these certain dilemmas arise and the films asks questions of you to think, well who do i believe? I want to believe this person, but she makes a strong case, and are they lying or telling the truth? All these questions suck you into the film and get you involved with the plot and anxious to find out more about what is happening.

Everything that happens in this film is building suspense, and it is all gearing up towards a big finale where everything is on the line and you are so invested in the characters at this point that when shit does go down, you will probably be surprised, as the film does a great job at posing questions but refusing to give you a straight answer. And i gotta give props to Robert Eggers, this was his directorial debut and the guy definitely has big things ahead of him. As for the bad, there isn’t really much, maybe one or two scenes felt slightly off but other than that everything was tied together. So in the end, this is a great new horror film that is fantastic all across the board and pushes for a new (or old) meaning for the genre that people really should appreciate more. Give it a chance, and if it isn’t your thing then you can go back to searching through the garbage bin of horror rubbish.