‘Money Monster’ stars George Clooney and Julia Roberts and is also directed by Jodie Foster. When a major company’s stocks crash one man who suffered major losses takes hostage Lee Gates and the entire crew of Money Monster hostage on live TV. Gates and Patty Fenn must work to find a way to survive the horrifying situation. As a Thriller, what this film had to do from the outset is get you invested in the characters and accurately set the tone for the rest of the film, so that when shit goes down you are on the edge of your seat and wholly invested in the film. And it is safe to say that i was definitely hooked in and fully invested for the majority of the film even though the film pretty much plays out how you would expect, mostly. The performances across the board are fantastic, the tone is on point, the tension is there, but the film does get a little busy in the middle and maybe doesn’t hit the big climax it was leading towards. 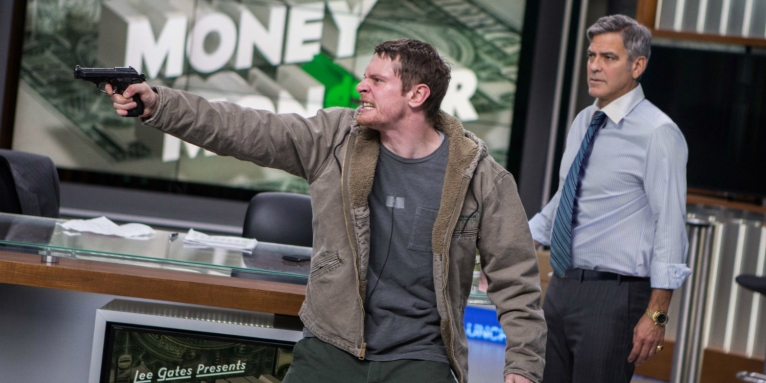 So as i mentioned, the performances in this movie were on point from all our main cast. Seeing the highly experienced Clooney and Roberts go back and forth in their attempt to get out of the situation alive was really entertaining. Their chemistry together made for some very dramatic as well as funny interactions that always added to the film. That being said, i think we could all assume those two acting powerhouses would be able to put on a show, but Jack O’Connell was definitely the wild-card for me. You think initially that acting against Clooney would reveal the difference in experience, but in this case it was rather the opposite. I think he was able to force himself to up his game to keep up with what Clooney was bringing to the scene, even to the point where he took the focus away from Clooney in a few scenes. So even though he was fantastic, there were one or two moments that could have been more effective with a little more emotion or power exerted in his performance, but overall he did deliver.

The plot of the film develops at a constantly changing pace, it starts off slower and gradually picks up speed as time goes on, this was a really good decision to keep things moving. As the pace increased over time, the tension did rise and it all worked towards a big climax that may or may not have delivered. The end of the film did get a little stretched out and i think it lost a bit of its impact due to it not being so direct. It may have also had to do with the fact that in the middle of the film it did get quite busy during the films transition between two main focuses. One entire plot-line doesn’t show up until half way through the film and for a brief amount of time there was quite a bit going on at once which took some of the focus away from the drama.

And i also have to mention, even though it is primarily a thriller there is a really plentiful amount of humour in this movie. It is also very well placed throughout the film where it was able to give moments of levity and something to laugh at whilst also not taking away from the seriousness of the situation. And i’m not talking brief little chuckle moments, there were a couple of big funny moments right in the middle of this hostage situation. How they pulled it off was great. So in the end this movie is tension filled, has great performances, a good amount of humour, but does suffer from some busy moments and a not so great climax. But there is definitely a good time to be had with this film, when it releases this Thursday June 2nd (Australia).