Directed by Richard Linklater, ‘Everybody Wants Some!!’ is at its core a comedy but also includes elements of a sports film, theres a romance in there, a little heart, a killer soundtrack, and most importantly a lot of fun. Now at one time Linklater struggles to find a balance between all of these components but for the majority of this film i was loving it. Set in the early 80’s it follows a college baseball team and their unsupervised shenanigans around town leading up to the beginning of semester, basically just enjoying themselves.This is Linklater coming off the end of 2014’s ‘Boyhood’ which received a 10/10 from me, unfortunately this film didn’t feel as expertly crafted as Boyhood, but it was a very different, fresh story being told and was almost as enjoyable. This film is also backed by fantastic performances from the talented cast which makes you really get behind these characters who all have great, lively yet contrasting personalities. 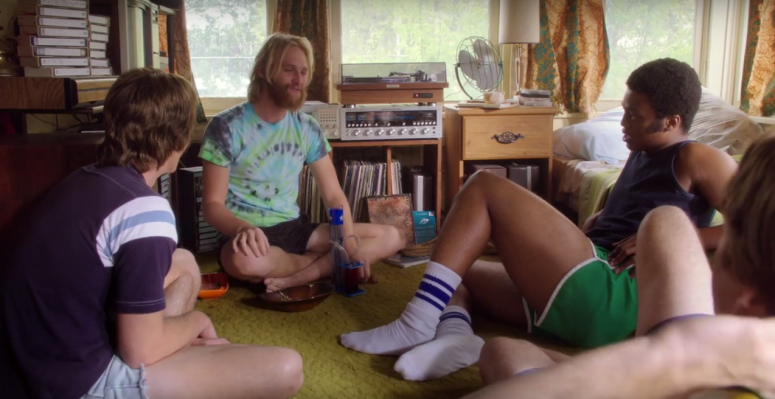 First and foremost, this movie is a very uplifting, bloody good time and i had a huge smile on my face the whole time. It isn’t bogged down by serious drama and extreme emotional conflict and these college students are just allowed to do whatever and whenever, which let the film be very free. It wasn’t predictable at all, you don’t know what is going to happen next and you are going on a ride along with this group of hilarious personalities. The chemistry between them and how their enthusiasm just bounces off each other all over the place in every scene was great to watch. And if it wasn’t for the performances put in by these actors, the film would have been an absolute bore. They add so much character to the already fun nature of these guys and completely transform into these strong 80’s characters… With a little help from the hairstyles and moustaches.

The comedy is constantly being thrown around in every scene. Theres no laugh out loud ‘ba-dum tsss’ jokes that feel out of place, rather the humour is just very natural as it would come about when you and a group of friends are talking about random shit. The romance is there, and it’s a very entertaining and light injection of romance that doesn’t take up a huge amount of runtime, they found a way to break it up and incorporate it into parts of the film where it just blends with the rest of the main story. Now, there was maybe a 10-15 minute section in the middle of the film where the film slowed down a little and it jumped a little between a few events but it was so short and it got right back to business and you almost forget about that section.

So in the end, again as with ‘Boyhood’ this film is not for everyone. For people who want their films to have a very specific plot and a visible direction it is heading in then this maybe isn’t for you. It has a very light plot with a lot of the plot being driven by character interactions and whatever college baseball players do in the off-season. But i loved it, it was so much fun, a very positive tone and it makes 2 fantastic films in a row for Linklater, cannot wait to see what the guy does next.