What an incredible adventure this was, ‘Stranger Things’ is probably the best thing to come out of Netflix Original TV Shows, so good that i cannot wait to watch the whole thing again. The majority of the show takes the form of an intense Thriller, but also incorporates many elements of Horror, Drama, Sci-Fi, and other Supernatural Elements that make this one of the best shows out right now. And you may be thinking that there’s no way they incorporated all those themes and maintained the same tone throughout the series, but they do it, and they do it incredibly. The show follows the sudden mysterious disappearance of a 12 year old boy named Will, and the investigation that follows into his disappearance, but all is not as it seems when those searching start to uncover mysteries involving superpowers, conspiracies and other supernatural forces. This is a gripping story that takes place over 8 chapters but are better suited to being seen as one long movie as every episode’s main focus is tied together to form a long continuous story that will take over your entire day.

You may still be thinking, why out of any TV show have i decided to review this one….. Well where the main focus of the film is the mystery explained above, at its core this entire series is an 8 episode homage to the golden age of cinema and TV; the incredible 80’s. The show was written and directed by The Duffer Brothers, and with every consecutive episode their love for 80’s film shines through brighter and brighter. This is an insight into how many films, TV, and people this series pays homage to, and get ready because this may take a while. The biggest homages here are being paid to visionary Steven Spielberg and films such as ‘E.T’, ‘Close Encounters of the Third Kind’ and ‘The Goonies’ (Writer), you then get homages to legendary horror director John Carpenter with his films ‘Halloween’, and ‘The Thing’. There are also elements of ‘Poltergeist’ and ‘Evil Dead’ weaved in there, and in terms of TV, ‘Twin Peaks’ plays a notable influence in the mystery at hand. I am sure there are a lot more but if all of those names are not enough to make you invest your time in this series then nothing is. I can confirm without a doubt that if you are a fan of any or all of those films and people then this show will be time very well spent.

One of the biggest elements that drives this film forward are the performances in this film, not only from the talented Winona Ryder, but also from the child actors that demand the majority of screen time…. Everyone here was just downright captivating. Winona Ryder and David Harbour were the two actors with some of the most experience and they were incredible at portraying their characters, both of whom have events in their past that make them who they are and why they act the way they do. They come across as real people and you wholly believe why they are acting the way they do and what drives them to do certain things. Winona Ryder especially was phenomenal in this entire series as she delivers so much power and emotion through her performance, sometimes you don’t even need the other performances around her because he was that amazing. 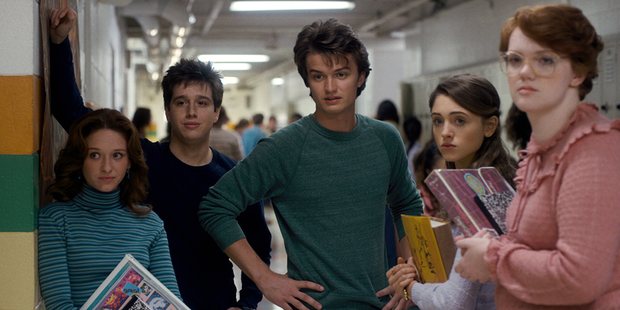 And you cannot go through this film without talking about the child performances here because every one of them killed it. Gaten Matarazzo (Dustin), Caleb McLaughlin (Lucas), Finn Wolfhard (Mike), and Millie Bobby Brown (Eleven) were so phenomenal i cannot possibly put into words how surprisingly amazing their performances were. The chemistry between their group and the way they go back and forth you completely believe that they are a real group of friends. Being a TV show you have the benefit of having a longer period of time in which you can develop characters and show how certain events change them over time. And i kid you not, every major and semi-major character in this show has an arc that develops throughout the show, some later than others, but all of them develop in various ways throughout the show to the point where when you look at them at point A and you look at them at point Z you can tell that B-Y really existed and had an affect on everyone.

The Duffer Brothers have created an exceptional TV show that explores amazing characters, phenomenal performances, a variety of themes and genres, includes a tonne of awesome 80’s homages, and at the same time had a killer score and soundtrack that i still cannot get enough of. Scores and soundtracks get criminally underrated with their importance in visual media such as film and TV, and this series shows how a killer score can enhance the entire show and bring so much more gravity to every scene. There is a lot to spoil about this show, and so there is a lot i cannot talk about so therefore i will leave it at that. The show expertly crafts every element and has created an amazing self contained story sure to be a big hit with anyone who is a fan of 80’s films or has a good 7-8 hours to kill, either way, not a minute of this show it time wasted. AMAZING.