STAR WARS IS BACK AGAIN…. And this time they have traded out the lightsabers and the force in favour of a more grounded story that is best described as a war film with ties to the extended Star Wars universe. It is most definitely different, and it is most definitely fantastic, no doubt i’ll be seeing this much more than once in theatres.

‘Rogue One: A Star Wars Story’ is the first anthology film in the Star Wars franchise acting as a prequel to the original 1977 film ‘Star Wars’. It focuses on an all new band of rebels who come together to steal the plans of the infamous Death Star in order to give the rebellion a fighting chance against the Empire. This film is packed full of high tension action sequences, great characters, plenty of humour, emotion, grit, an incredible story, and offers so much entertainment for both die hard Star Wars fans as well as the casual movie-goer who may not be well-versed in the universe. Being a prequel leading directly into ‘A New Hope’ everyone knew what the situation would be come the end of the film, but what Gareth Edwards did with the story was genius because despite us knowing the beginning and end of the story all of the rich content in between was unknown leaving plenty of room for surprises.

One thing every introductory Star Wars film seems to do very very well is how it establishes new characters we have never seen before and instantly gets you on their side and rooting for them for the entire film. The film focuses a very balanced amount of time on everyone within our group of heroes to where you quickly grow attached to each one of them and are rooting for their success. Whether it be Jyn Erso (Felicity Jones), Chirrut Imwe (Donnie Yen), or Bodhi Rook (Riz Ahmed) you learn either through visuals or via dialogue enough about their backstory and how they find themselves fighting against the empire that you feel like you know everyone and they feel real. The clashing of personalities and beliefs within this crew made so many character centric moments much more entertaining and gave this group of unlikely allies some more complexity as oppose to just instantly being a great experienced co-operative unit which would have just been too convenient. In terms of humour essentially all of it was delivered by K-2SO (Alan Tudyk) who is another standout and has many comedic lines lightening up the mood here and there which was very well applied.

But the major focus of this film in terms of characters is obviously Jyn Erso, a believer in hope and someone who with her determination to exact revenge on the Empire can unite rebel forces to fight back. Jyn is such a well written character and as much as the film is about the stealing of the Death Star Plans it really is a story following her journey through the existing universe from a young girl to a strong, independent war-fighter. One question or maybe even a concern for some people going into the film was whether Jyn was just going to be a cliche female hero finding out who she really is and whose purpose is just to spread hope during a time of war but she is much more than that. She is a unique character in the universe who may share similar traits as other previous characters but really makes them her own here.

Now what are our heroes without some great villains to go toe to toe with. What was great about the way this film handles its villain(s) is that you are dealing with people such as Director Orson Krennic (Ben Mendelsohn) who is not well adept with a lightsaber or in combat in general but rather is a key figure in the construction and operation of the Death Star. But his story and journey throughout this film is also a very interesting one with many layers to it that i cannot and will not spoil here. Of course everyone knows that at the time this film is set Lord Vader is very active, and he definitely does have a presence in this film, a presence that once again is best left unspoiled. 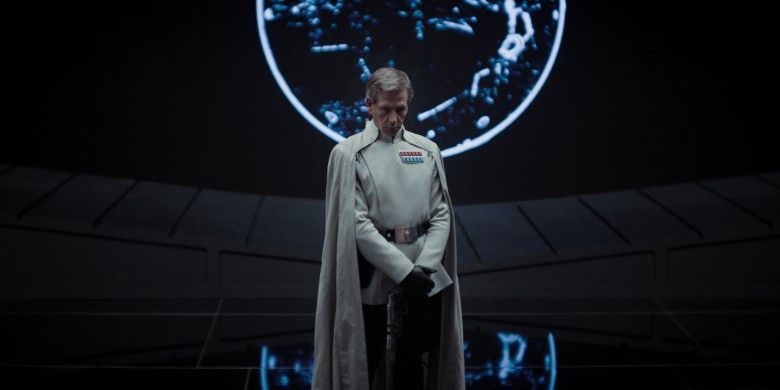 The action set-pieces here as i mentioned are intense, fast paced, and absolutely stunning. As was mentioned by Gareth Edwards this film really does have a gritty war aesthetic and you feel that at multiple points throughout the film. This is Star ‘WARS’ and here you finally get to see with full effect the level of destruction that occurs on ground level whilst the space battles are playing out. At no point do you feel the main characters are safe, it is a time of immense danger around every corner and it it this presence of never being safe that has you so on edge during these very small in scale but large in impact battles.

The story in this film really is a great one from start to finish, i’m not going to go into any specifics because it takes turns you don’t expect and those moments are best left to be experienced within a theatre. But you are on a very fast paced mission with these characters who you get so emotional attached to which only enhances the effectiveness of every scene in the film. It takes no overly predictable turns and at no point can you pinpoint exactly how certain events are going to play out and this has you on the edge of your seat.

I will also say that if you really want to get the most out of this film in terms of understanding character backstories and giving new meaning to character relationships within the film you should definitely consider reading (or listening to the Audiobook) ‘Star Wars: Catalyst’. It is in no way necessary in order to enjoy this film but it provides plenty more information about the history of characters such as Galen Erso (Mads Mikkelsen), or Orson Krennic. It explains a lot of things introduced early on that some people may be slightly confused about and it really does tie in nicely as a companion to this film so if you feel like it, definitely check it out.

Speaking of tying in nicely, with no spoilers, the way this film connects itself back to the original trilogy is done in such a way that is perfect and will most likely blow the minds of die hard Star Wars fans. So, in the end this is an amazing entry into the Star Wars franchise and a very promising sign for the future Star Wars spinoff films that are yet to be released. It does so much right, and almost nothing wrong, some early editing was a little choppy but a very minor negative. It is both a fantastic Star Wars film, and an incredibly beautiful War film, two things everyone should be excited about. But the best part about this film being a spinoff is that you need no previous Star Wars knowledge to get plenty of enjoyment out of this film as a whole, but, without the reading of the Catalyst novel some things may seem like there’s some backstory missing.

Look out for my Spoiler Filled Review coming soon.