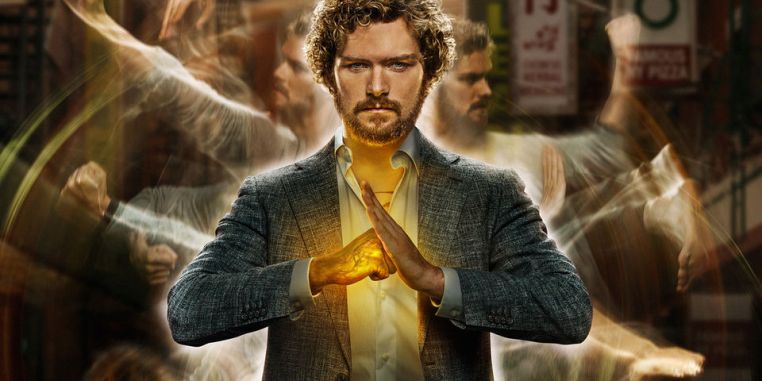 ‘Iron Fist’ is the fourth Marvel Netflix show in the MCU and the final one before we get ‘The Defenders’ in mid 2017. This show throws a number of new characters into the mix while focusing on Danny Rand aka ‘The Iron Fist’, who returns to New York after a plane crash led to him spending 15 years training in a far off monastery in K’un L’un where he gained the power of the Iron Fist. The previous three Marvel Netflix shows (Daredevil, Jessica Jones, and Luke Cage) have all been fantastic, so much so that this entry had a lot to live up to. And although i did like this show a lot more than it seems critics are responding to it, it does have some pretty noticeable major flaws that prevent it from being as great as those previous examples. The show starts off pretty strong, the first few episodes from start to finish do a good job setting up the world, the characters and future plot points, but from there the show unfortunately doesn’t really go anywhere. It has its moments of explosive action and dramatic tension that are great but overall the show fails to build any momentum and have one overarching plot consistent through the whole season. 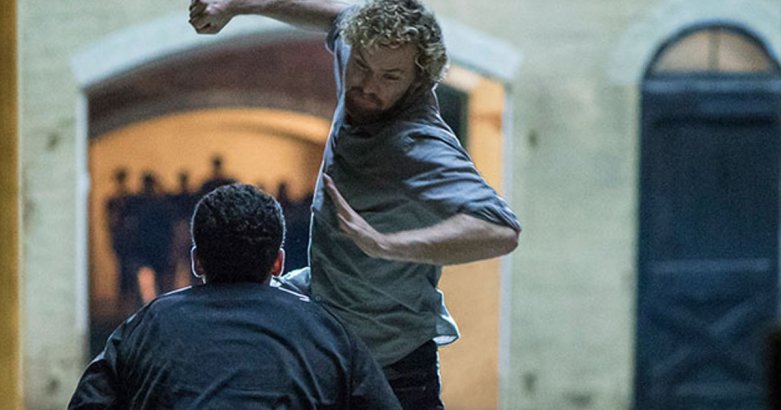 Firstly i will get to our new hero in Danny Rand (Finn Jones) who going into the show i knew the least about and was eager to learn more about him. He has a number of very cool and interesting moments throughout the show where you have glimpses of a personality and a definitive likeable character. Such as when he first arrives in New York he has a very laid back and sort of playful demeanour and it would have been good to see this stay consistent throughout the show. But as he further adjusts back to New York life it’s like we are progressively watching him die inside as he ends up just having no flair to his character, nothing interesting and at times he acts irrationally and childlike which is sometimes frustrating. He can fight good and punch stuff well, but when it gets to the more dramatic and political aspects of the show it really is up to the supporting characters to deliver. And i have to say, for around 90% of this show i was more interested in the side-plots involving the supporting characters as oppose to Danny’s conflicts as those characters were actually really engaging.

It’s just that compared to the previous Marvel Netflix shows this one in particular is lacking a sense of character. All of the previous entries have a distinct aura about them and a sense of character that you associate with the show in its entirety. But this show doesn’t present itself in a way that allows you to associate a style to the visual and/or written storytelling. As a result the show as a whole is not as memorable as it definitely should be.

If it wasn’t for the fantastic supporting cast of characters this really could have been a disaster. Harold Meachum (David Wenham) from the beginning was instantly one of my favourite characters, there is a sense of mystery about him and the way he goes through the show always (or mostly) having the upper hand in various situations made him a character who at times you love, sympathise for, but also at the same time really hate.  David Wenham plays the role fantastically and sells his odd behaviours with plenty of conviction. Ward Meachum (Tom Pelphrey) was also another character with a lot of inner conflict and someone who flip flops back and forth from good and bad but it makes sense as to why and when he does so. It felt very natural and watching him deal with his various ‘predicaments’ made for some very cool scenes. Colleen Wing (Jessica Henwick) was a great partner for Danny and she contributes plenty to the drama and especially the action over the course of the season. Part of me thinks that a show based on her character would have had a little more personality but i don’t think there would have been enough of a strong story to tell there. There is a questionable revelation that she was in fact part of The Hand all along which i’m not sure worked as well as they hoped it would.

The returning characters Claire Temple (Rosario Dawson) and Madame Gao (Wai Ching Ho) both play a large part in the story and it really does help to connect all of these shows together more-so than any of the other shows have done so far. You learn a lot more about Madame Gao and how she and ‘The Hand’ have a much larger grip on the way New York is run than previously thought. She is a fantastic character who is perfectly evil and always presents herself as the smartest one in the room, no matter what is happening she is always 10 steps ahead of anyone else making her a very old yet formidable opponent. Seeing Claire get to kick some more ass in this show was very cool and seeing her character grow to accept that if she’s going to be hanging around all of these superheroes she’s gonna need to learn to protect herself was nice for her development in this universe.

The supporting character i had the most issues with however was Joy Meachum (Jessica Stroup). It has absolutely nothing to do with the performance as the character, rather, the way her character is written to act throughout the show is very very frustrating. From the very beginning she was a character i wanted to root for SO bad, i wanted her to be at the top of the food chain come the end of the Season, but for some reason the writers completely messed with her character. The way she flips back and forth between helping and hating Danny throughout the season was incredibly annoying and just didn’t make sense for her character. I get it, she has a loyalty to her company and to her family but the way she turns on Danny in a heartbeat made it hard to really like her character when i really wanted to. Along with the questionable changes of heart regarding Danny early in the show she has a few odd moments where she acts very suss, going behind her brothers back when they get kicked out of the company because she apparently ‘had a plan’. Stuff like that where one scene she talks about making a decision together with Ward and then the next she backstabs him annoyed me. And then in her last scene after talking to Danny’s friend Davos she apparently seems back on board with getting rid of Danny…. What? Why? 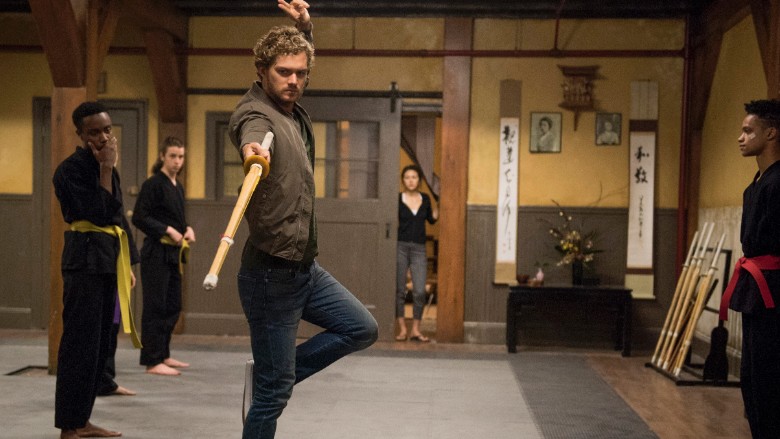 I don’t think i have to go in depth about how good the action is because if there is one thing these shows have communicated very well it’s that they know how to shoot action. Here, the hand to hand combat was very fast and unique in terms of style compared to Daredevil and the sword combat was also very fast paced, smooth, and entertaining to watch. Of course you have not one but two tight hallway fight sequences that are the staples of these shows by now and they are still just as good as they ever were. So yeah, the action is a definitive plus.

Now, this shows biggest flaw is without a doubt that it fails to build any momentum whatsoever over the course of the 13 episode season. In all of the previous shows there was one or two overarching plots that carried though either the whole season or at least most of it where the story would constantly pick up the pace, ramping towards a big finale. But really, you could probably grab episodes 11 and 12 for example, and compare them with episodes 2 and 3 and you wouldn’t be able to notice any difference in momentum, there is no heightened sense of urgency in the later episodes than the earlier episodes so it fails to really draw you in to absolutely NEEDING to see the next episode right away. And this is mainly due to the fact that there isn’t one plot or story that lasts over the entire show. The closest you get is the conflict with The Hand but even then it just doesn’t go anywhere. For example, in Daredevil S1 the conflict between Daredevil and Fisk stretches and builds over the entire season, in Jessica Jones S1 the conflict between Jones and Kilgrave builds over the course of the season, in Luke Cage S1 you have the war with Cottonmouth building for half the season, and then the war with Diamondback building for the latter half… But here everything is all over the place.

First you have Danny at war with the entire Meachum family. Then you have the feud between he and Harold end, becoming pals, and closing out that story, then you have the feud between he and Ward end, closing out that story. Then in the background you have the feud between he and Madame Gao playing out which does last a while but their feud is constantly stopping and starting due to her mind games. Then you have Harold come back to life and all of a sudden this new story and relationship with him kicks off but with not many episodes left it’s short lived. And then you have this entire new plot with Bakuto get introduced with only 2-3 episodes left so you don’t get invested in their feud. And Danny’s friend also shows up with 2-3 episodes left so their arc is very short-lived and you aren’t that invested in them. So really the majority of Iron Fist’s conflicts are over within a few episodes so that is why there is no large sense of momentum building throughout the show.

And then they end the show on a cliffhanger that you just do not care about. This whole show we have HEARD Danny talking about this K’un L’un place, we saw it from afar once, we have glimpsed Danny’s mentor for like 5 minutes, and we met Danny’s friend for a little over 2 episodes. So we really have absolutely no real introduction to this monastery, and thus no connection to the place. So when the show closes out asking the question WHERE DID THE MONASTERY GO? I ask the question WHY DO I CARE? It was a poor way to close out the season that i thought was ending on a high note.

So in the end even though it does sound like i am being very overly negative about the show, i did still enjoy it. It’s just that the flaws are so obvious that i can’t help but go into details of why it doesn’t work. But as far as the characters and the action go and this shows place in the MCU i enjoyed watching this show and cannot wait to see how all of these heroes come together for ‘The Defenders’.