The franchise that is showing no signs of ever slowing down is back with its 8th instalment and it could still be the best one yet. The previous film in the franchise Furious 7 was fantastic, i loved that movie a tonne and it still holds up after 3-4 viewings. This is the first instalment that does not star Paul Walker and although within the crew dynamic his absence can sometimes be felt it doesn’t necessarily hurt the film in any way. You go into this film expecting more of the same, a fairly straightforward good guy bad guy plot, high octane action, nonsensical explosive spectacles, and lots of quick witty humour…. and that is more or less what you get. The plot itself isn’t really that strong and inventive even though it presents itself to be but it is simple enough and entertaining enough to keep you invested in the film and the characters both new and old. The action here is big and it once again tries to top the previous films. In terms of size and destruction i would say there are moments that definitely outdo the previous films but overall i feel like Furious 7 was more consistently paced and action packed.

One of the things that really holds this film together is the incredible crew dynamic that has been built up and established over the previous films. It is so much fun watching this gang go back and forth with smart quippy dialogue and personalities that clash with hilarious results. Scott Eastwood is the newest addition to the franchise and i have to say that apart from a few early questionable moments he does fit right in pretty nicely lending himself to some pretty humorous moments. He is not a ‘Paul Walker replacement’ as he plays a very different character with an obviously very different role in the film. But the best thing you get out of this ‘family’ is definitely the humour, there are a tonne of big gut-busting laugh out loud moments scattered all throughout this film. Tyrese Gibson has the biggest input when it comes to the humour contributing to the majority of the hilarious moments but in the end everyone chips in at some point. Dwayne Johnson has some funny moments, Ludacris gets a few here and there, and Jason Statham proves his worth as a comedic actor with some seriously hilarious sequences with one that is equally awesome as it is funny.

Charlize Theron was a pretty good villain, she plays the role very well and i bought her as an evil mastermind. She wasn’t fantastic or anything, she isn’t going to be on any ‘greatest villains of all time’ lists but i thought despite her expectedly over the top evil plot she posed a decent threat to the Fast and Furious team. 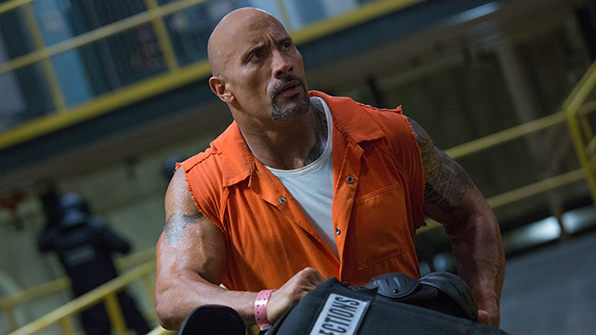 In terms of the action, when i say this film goes huge i mean it goes HUGE, there are two main sequences where the film outdoes itself in terms of destruction and just overall craziness and it is truly insane. You really need to suspend your disbelief for this, and it is easy to do as the film blatantly accepts its ridiculousness and doesn’t try to hide it. There are also many other fast paced action sequences strategically placed throughout the film that link up and make it a fun ride all the way through. The third act specifically is a crazy non-stop thrill ride and i feel that it did top that of its predecessor Furious 7. There are so many awesome spectacle moments and really cool surprises in this last act that the film closes out on a massive high. But, where i feel this film doesn’t quite surpass the 7th instalment is just the overall pacing of the first act or so is a little hit or miss. It is very up and down and there are a couple of moments that aren’t all that engaging but they are short lived. Also the film takes a bit to get going, it opens up with a street race, i guess because they wanted to show the franchise is still about racing and they needed a big opening number. It was cool but in the context of the entire film it was very isolated and there wasn’t really much of a point to it.

So in the end i loved this movie, it goes bigger than ever in terms of the action set pieces and it does pay off greatly with an epic third act with so much going on it is definitely worth seeing again. Although the action was bigger, and this was definitively funnier than the 7th film i feel like overall the quicker pacing and consistent action of the 7th film just places it above this one as the best of the franchise, but only VERY marginally. There are talks that we could be seeing up to at least Fast and Furious 10 and i say bring it on, no-one knows a single thing about the next instalment of the franchise and regardless of the year it is releasing it will be in my most anticipated list of that year guaranteed.