Prometheus, released in 2012, saw the return of Ridley Scott to the franchise he began way back in 1979 with ‘Alien’. Ever since i first came across the masterpiece of Horror that is the first Alien film i have been in love with everything involving the mysteries surrounding the aliens and the world they reside in. So fair to say that when this semi-prequel to Alien was announced it very much caught my attention. Now it may not be directly connected to Alien and in the end leaves you with more questions than you had when going into the film but nonetheless i fucking loved this movie, so much so that it is my favourite movie of that year. The film follows a team of scientists aboard the Prometheus who travel to the far reaches of the universe in order to understand clues about the origins of mankind and concurrently builds on the mythology of the mysterious Engineers (Space Jockeys). This movie boast incredible performances across the board, a gripping story, terrifying horror sequences and Ridley Scott’s trademark beautiful visuals.

Firstly, what makes this film so enjoyable and adds a tonne of personality to it are the performances from the crew of the Prometheus. To name a few, Noomi Rapace, Michael Fassbender, Idris Elba, Charlize Theron, Logan Marshall-Green, and Sean Harris are all fantastic and their chemistry throughout the film makes for many brilliant scenes. Noomi Rapace was great as the female lead Dr Elizabeth Shaw, she may not rival Ellen Ripley in overall badassery but her intelligence and survival instinct make her a great protagonist to follow. Her commitment to the role is very noticeable as she conveys every emotion Dr Shaw is feeling fantastically and in times of great distress you really do feel the desperation of her character to persevere. Michael Fassbender though is probably the standout amongst this crew of scientists as the android David. His performance as a very intelligent and human-like android with a great attention to detail was riveting. David doesn’t have an abundance of lines in the film and it is the moments where he is not speaking where you get to really appreciate Fassbender’s performance. I could watch David stare at various bits of alien technology for 2 hours and still be thoroughly entertained. Despite portraying an android he delivers every line with enough personality to where it isn’t quite human but also not too robotic and it’s that balance that makes the him so damn compelling to watch.

The story that plays out in this film is just utterly brilliant from start to finish. It is never for a single second predictable and goes in so many cool and unexpected directions that you are never uninterested and constantly on the edge of your seat in anticipation. It flows at a very steady calculating pace that slowly builds in the latter parts of the film as the Prometheus crew are constantly subjected to the dangers lurking within Planet LV-223 providing tonnes of intense content. And the great thing about this film being disconnected from the rest of the Alien franchise is that it incorporates a story that needs no prior knowledge of the universe to be understood whilst at the same time providing many nuggets of significant information to fans of the franchise like myself. It is a film that benefits from repeat viewings as there are many subtle hints to things going on behind the scenes that you won’t pick up on the first viewing.

With the return of Ridley Scott to this franchise comes his trademark use of incredibly stunning visuals that provide so much wallpaper material it is insane. It is a given at this point, when a new Ridley Scott movie is coming out you can just expect it to boast incredible visuals whether the quality of the film is good or not. Everything from the wide shots of planet LV-223 to the incredibly detailed sets within the artificial structure is incredible to look at and does a great service to visualising the validity of this fictional world. Oh, and the score in this film is just incredible, it plays into the story and what the characters are going through fantastically. Ridley Scott puts on show his great use of horror and suspense through this score as there are so many intense sequences traversing through tight hallways where the terrifying atmosphere is amplified through horrifying sounds. 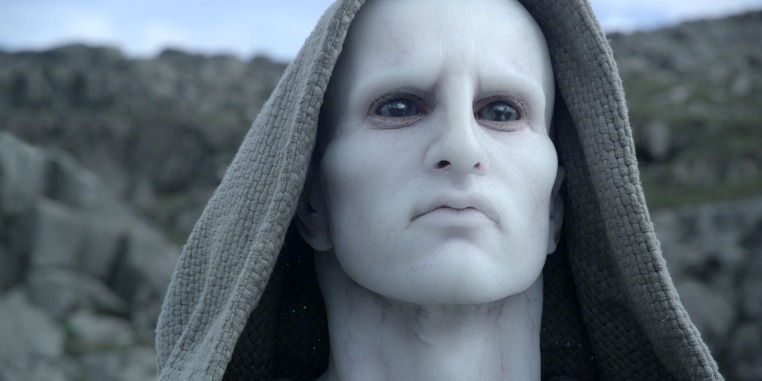 So in the end Prometheus is an incredible film, some may even call it a masterpiece and for me it is my favourite film in the Alien franchise. My only gripe with the film is a minor one and it does have to do with the stupid actions of the two scientists Fifield and Millburn. Their actions in the Ampule Room were infuriatingly dumb, especially for people as ‘educated’ as them. Everything about this film from the performances, visuals, score, horror, and plot are amazingly implemented and tied together by Ridley Scott making this an awesome semi-prequel to Alien that has opened up the mythology that will be explored in the films to come, beginning tomorrow with Alien: Covenant.