The next chapter in Ridley Scott’s Alien prequel franchise is finally here and although it may be far from the best it largely delivers on what you’d expect from an Alien film. In the film you follow the crew of the ‘Covenant’ on their journey towards a newly discovered Earth-like planet that turns out to feature hidden and somewhat familiar dangers lying beneath the surface. Ridley Scott incorporates his incredible visuals and great use of tension filled horror just as well as ever here as the Aliens cause a whole world of trouble for the crew. The story is where the film struggles the most, there are some really good story points throughout the film and some very cool and interesting things going on that connect to the other instalments in the Alien franchise but i feel this movie was trying to do too many things at once and so it essentially had two ‘main stories’ progressing concurrently. The new crew here i don’t feel was as strong as the Prometheus crew just because you don’t get into their characters nearly as much here, but there were a couple of interesting relationships that do a fine job at engaging you throughout the film.

I will start with the cast which wasn’t a hugely talent filled cast but still provided some good performances and was largely tasty bait for the various Aliens running around. Katherine Waterson as the female lead was pretty good, i still think she was the weakest in the franchise but she was serviceable and sold her resourceful action oriented character really well. The rest of the cast including Billy Crudup, Danny McBride, and Carmen Ejogo were good in their roles but aside from McBride none of the others really stood out as memorable characters that you could get behind. But once again, and more-so in this film Michael Fassbender completely steals the show and this time as two characters, Walter and David. His subtle versatility as an actor is completely on show here as not once do you get confused who you are watching, despite differences appearance-wise he puts little mannerisms into his voice and performance that make his identity very easily distinguishable. He is such a joy to watch and without him i feel like this film would have had a MASSIVE hole left in it. 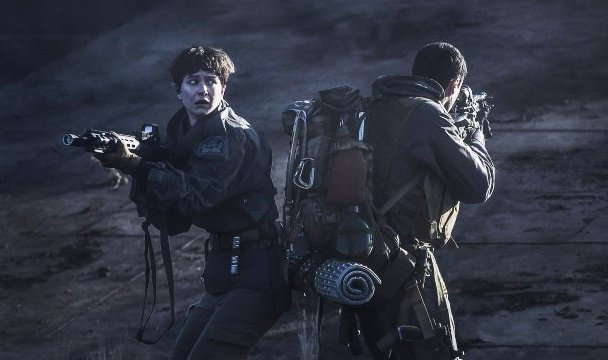 Ok, now, the story of the film as i mentioned follows many different plots and side-plots, there are a few very very interesting ones and the content explored in those scenes had me completely hooked. But i feel like the film had so much to do and cover that it ultimately stumbled on trying to focus on everything going on whilst maintaining a steady pace. It had to introduce this new crew and focus on their relationships and the dangers they face, it also had to connect to previous films in the franchise in various ways, and it was dealing with a few other interesting side-plots involving conflict between characters that i won’t spoil. All or, well, really most of this content was great but the way it swaps between the various stories was a little all over the place at some points making it sometimes hard to follow. For instance, one of the side plots involving the constant interactions of two characters was full of fantastic, great, and meaningful scenes that in the end of the film all tie together amazingly, but the way they were placed in the film sometimes just didn’t fit and really did bring the quick pace in the second and third acts to a near standstill.

One thing that isn’t really a spoiler but i feel is necessary to understand going into the film is that contrary to what i previously understood, you cannot really go into this film without seeing Prometheus. I mean, the film isn’t Prometheus 2 but there are many moments where it kinda is. This is a fact great for fans of the franchise but i feel will severely hurt it when it comes to general public reactions. 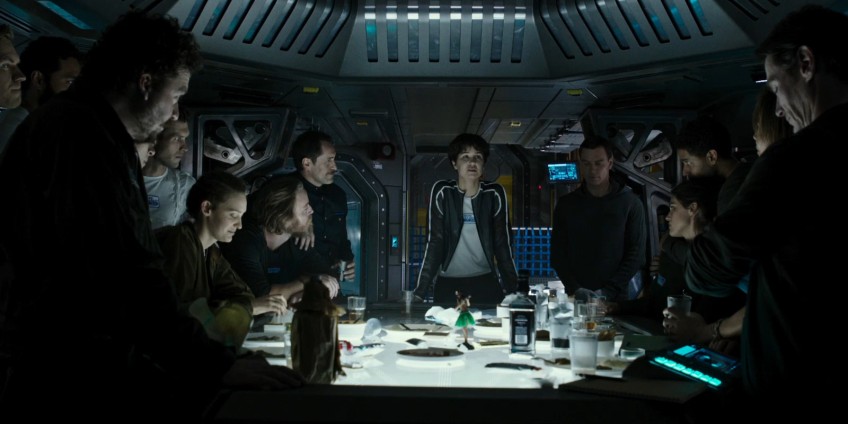 Now one thing missing from Prometheus that was a big part of the original Alien is the blood, gore, aliens, and hard R horror…. thankfully Ridley Scott brings that back here in full effect. It is gruesome and violent and full of blood, guts, and all of that juicy content. It really does take me back to the original Alien film where the Aliens were a terrifying and seemingly unstoppable force of nature. The film is full of tension filled action sequences that don’t quite feel as claustrophobic as in the original but do convey similar themes really really well. The score in this film isn’t quite as good as in Prometheus but there were two moments in the film where because of the score i lost it, but due to spoilers, that explanation will be omitted from here too.

So in the end, Alien: Covenant is a good film but doesn’t quite reach the greatness of the original Alien and in my opinion is very far from Prometheus. The crew was good, the lead performances were pretty good with Michael Fassbender the obvious standout throughout the film. The reintegration of brutal horror into the franchise was a very welcome addition and gave it that classic 1979 feel. Despite the various story arcs focusing on interesting and very engaging content the way they are all edited in throughout the film is a little all over the place making some things a little difficult to follow in the moment and leading to quite a bit of downtime in between fast paced action oriented moments. Obviously for Alien fans there is a lot more you can delve into regarding the lore but i think people who enjoy this Sci-Fi Horror genre can still get a good kick out of it.