As we go into episodes 3 and 4 we seem to be moving away from the town of Twin Peaks for the time being as there are only a small handful of scenes here that take place within the town itself. This adds to the fact that i think these two episodes are some of the most crazy, ballsy, and original episodes in the history of Twin Peaks, and given the shows notoriously ridiculous history that is a really heavy statement. Whatever goes on inside David Lynch’s head to come up with this stuff is both undoubtedly insane and concurrently genius.

For instance, the first 30 minutes of episode 3 is the biggest acid trip mind fuck i have ever seen on TV. This entire 30 minute sequence forgets about grounding the show in reality as we follow the real Dale Cooper stumbling aimlessly through various crazy supernatural rooms seemingly still within the Black Lodge, coming across a woman with no visible eyes and a very different Ronette Pulaski who seems to know what is waiting for him in the real world. The editing is rapid and puts the progression of scenes out of order and the lighting creates a very dark and grim environment that completely sucks you into the craziness on screen. And then just when you think the craziness is coming to an end we are introduced to what appears to be a third Cooper doppelganger who is in possession of the familiar Owl Cave Ring and goes by the name Dougie Jones. The biggest questions looming right now are how this could be, we get hints through various bits of dialogue that Dougie was apparently manufactured by someone in order to give Good Cooper a way out of the Black Lodge that doesn’t require the death of Evil Cooper, but that is all the info we have right now and it doesn’t make too much sense yet.

So after 25 years of waiting, through the sacrifice of Dougie Jones, Dale Cooper is sucked into the wall and spewed out of a wall socket back into the real world where he isn’t quite the same anymore to say the least. Following some disgusting scenes of Cooper doppelgangers throwing up a whole concoction of colourful solids and liquids we quickly realise that Dale Cooper is a dimwitted shell of a person who doesn’t know anything about himself and cannot function as a human whatsoever. This may cause some debate amongst fans but personally I LOVED EVERYTHING that happens with the stupid Dale Cooper and Kyle Maclachlan sells the character perfectly. That moment where he conveniently ducks in the car to avoid being assassinated was absolute GOLD, and then the scene of him trying to get through the revolving doors at the casino had me in genuine stitches for literally minutes. Everything that happens in the casino with Dale winning 30 fucking jackpots and yelling HEELLLLLOOOOOOO every damn time was incredible. To be honest, i could watch an entire season of stupid Cooper stumbling through various social environments and never get bored. Again, this entire lengthy sequence is so out of left field, crazy, and ballsy, and is the reason i love this show so damn much….. there really is nothing like it. These two episodes had so much hilarious content in them it’s unbelievable, there is one scene in particular that is phenomenal, honestly it is one of my favourite comedic scenes in any TV show i’ve seen. The scene is where Lucy, Andy, and Hawk are looking over Dale Cooper’s evidence box for clues relating to Hawk’s Indian heritage. What follows had me in tears to the point where i paused the episode and rewatched the scene 2 more times because i didn’t want it to end. So many hilariously quotable lines. From the moment Lucy gasps and hilariously goes on about “The bunny…. the bunny…. i ate that bunny” I had already lost it, done, on the floor, laughing my fucking ass off. “Do chocolate bunnies have anything to do with your heritage?” “No it’s not about the bunny”. And then how she goes on about having a “bubble of gas” and how Chocolate can be used as a remedy for gas i was past the point of no return. It’s amazing how after 25 years these actors still have these characters nailed down so perfectly. But one thing we can definitely not take away from this scene is that it is NOT ABOUT THE DAMN BUNNY.

This scene is followed by another oddly intriguing scene featuring Dr Jacoby who this time is seen spray painting the shovels he bought earlier in a gold colour. I don’t know why he is painting shovels gold, and why we spent a good 5 minutes watching him do so in silence but what i do know is i want that invention he was using to hang them….. just to have and not use. These episodes also see the return of more original characters including FBI agents Gordon Cole and Albert Rosenfield played by the one and only David Lynch and the late Miguel Ferrer respectively. These two are so much fun to watch and their back and forth make for some great hilarious moments………… “CAR SICK”……… That moment was fucking hilarious and needs no explanation, utter perfection. David Duchovny also returns for a short scene as the iconic Denise Bryson who has worked her way up in the DEA since we last saw her. And in the most emotional scene so far we welcome back Bobby Briggs who when he sees a photo of Laura Palmer breaks out into tears and when the original score kicks in i almost did the same. 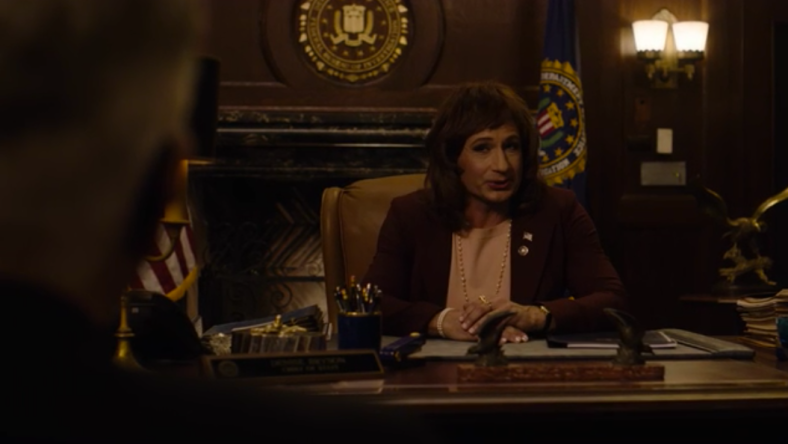 Unfortunately one character we won’t see return for this Twin Peaks season is Sheriff Harry Truman, one of the most prominently featured characters in the original and Dale Cooper’s right hand man. Instead we have Robert Forster being introduced as playing his brother Sheriff Frank Truman. Not having Harry is a bit of a disappointment but seeing Forster get a second chance to be in this series after originally being first in line to play Harry Truman way back in 1990 is pretty cool. Also adding to the humour of these episodes, the way Lucy freaks out at the arrival of Frank was a big gut-busting moment. The way she reacts when the person she is talking to on the phone about thermostats walks through the door in front of her was hilarious. This is obviously due to the fact that we only ever see Lucy planted behind her desk communicating through landlines so her surprise at the existence of mobile phones made for a good laugh. Naomi Watts is also revealed in this episode as the wife of Dougie Jones, she has a minor role and probably won’t be featured much in the future but her character was great and fit perfectly within this Twin Peaks universe. Oh and having Michael Cera show up briefly as the 24 year old son of the quirkiest couple in history; Andy and Lucy, was so unexpectedly perfect. It’s like he was born with the purpose of playing their son in a brief cameo.

Again, these two episodes were very very different from the first two in terms of structure and also different in almost every other way. In true Twin Peaks fashion these episodes take crazy to the next level and it works on so many levels making for tonnes of hilarious content that bought me to tears. I cannot wait to see where the story goes from here as we still have 14 hours left in this historic 18 hour TV event.