Well here we are Annabelle, we meet again, i guess i should thank you for being the reason i began reviewing films in the first place, but then again i had to sit through the piece of shit that was your first film. That being said, who said sequels (or in this case, prequels) couldn’t be better than the first film? Because this film was surprisingly fucken great. This new entry in the Conjuring Universe offered up a tonne of really well executed scares and insanely tense moments that actually had me fearing what was about to happen. Start to finish the pacing is on point, i was never bored and the film only got better and better as time went on, as did the scares. The performances especially from the lead girls were great and very convincing whereas a couple of supporting performances weren’t too impressive. But all in all as far as possessed doll movies go, this may be one of my favourites, especially in the modern era of horror. 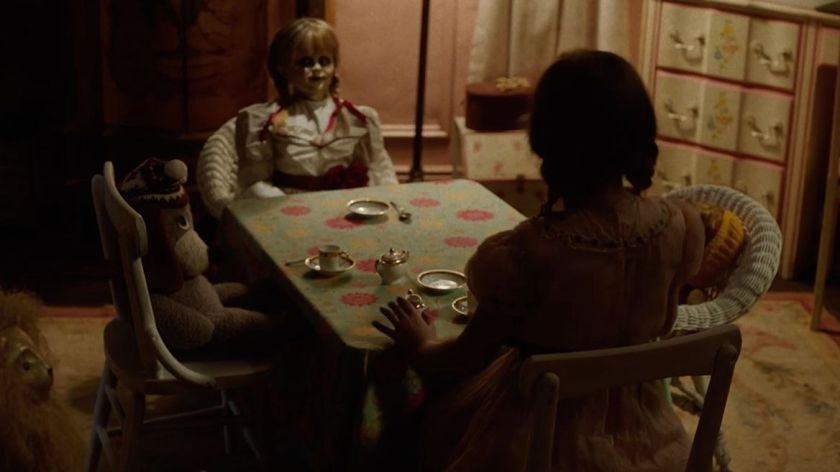 The one detail about this film that gave me hope going into it was the fact that David F. Sandberg (from Lights Out fame) was going to be the one helming the project. And the choice paid off greatly as the way he builds suspense both right before a scare and across the entire film is very well executed and without him attached i don’t think this would have been nearly as good. The way he incorporates a thrilling score and great sound design makes a huge difference that puts this above many similar to it. But as for the scares they are plentiful and there is a huge variety of scares used here that constantly catch you off-guard. Of course you have some of your trademark scares here, but the majority of them were very well orchestrated and not just simple jump-scares making every moment terrifying and not predictable as to what scare would occur and when. Also the foreshadowing in this film is handled incredibly well, if you come across a scene early on that feels pointless like, why are they spending so much time on that one thing? Don’t worry, it will pay off soon enough and probably scare the shit out of you.

And i mentioned the pacing here which is so perfectly handled it’s truly beautiful in the modern age of horror films. You get a good amount of well spaced out scares throughout the first third of the film that picks up gradually throughout the second act moving towards a third act which is fucking insane. I’m sure the third act of this film was about as long as the other two acts but Sandberg doesn’t give you a chance to breathe literally until the credits start to roll and so you perceive the third act as being much longer. Any director who can successfully achieve this in a horror film is an expert director in my books. This being only his second feature length film has me really intrigued to see more from him. 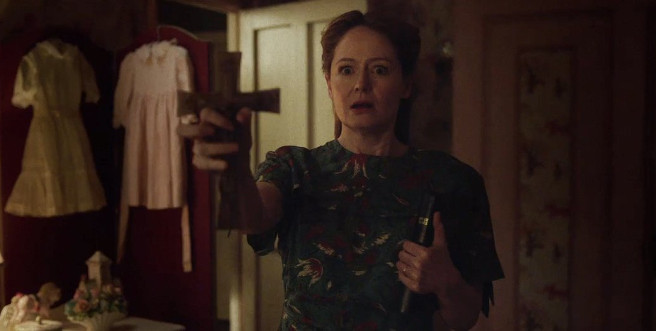 In terms of the performances, Talitha Bateman is fantastic and sells every bit of fear, intrigue, and terror immensely well in her very diverse performance. It seems with most of these horror films featuring young girls a new up and coming talent is revealed. But who i think completely steals the show in terms of her character, but most importantly in terms of her performance is Lulu Wilson who i loved as the lead in 2016’s ‘Ouija: Origin of Evil’. That’s two big horror films now that she has excelled in and she is now on my radar for must watch child actors. She was just insanely fun to watch and such a great character who as a viewer you side with instantly. Anthony LaPaglia (Samuel Mullins), Miranda Otto (Esther Mullins), and Stephanie Sigman (Sister Charlotte) all put in really strong supporting performances who all get their moments to shine. Some of the other young girls though weren’t so great, they may have had a moment or two where they served the purpose of the scene but other than that they were pretty forgettable.

And as for connecting this film to the Conjuring Universe i feel like the way it is handled is epic and that’s all i will say as to not spoil anything. So in the end, i have to say i loved this movie, if you told me a week ago i’d be coming out of an Annabelle prequel having loved it i’d have thought you were crazy. But the use of horror was great, i was thoroughly terrified and i really do recommend checking this one out. Also there is a mid-credits and after-credits scene so do ensure you wait until the end.