What a packed, incredible, amazing, and absolutely fucking bonkers episode that reveals a lot of juicy information to us and to characters in the show and really sets the ball rolling for the last 4 episodes. This episode takes place primary with both the FBI crew who learn a lot about dreams curtesy of Monica Bellucci, and the Twin Peaks Sheriff Department who go through some pretty crazy shit as per the instructions given by Major Briggs. Everything is starting to come together, the crews involved with searching for Evil Cooper and Good Cooper are getting closer and closer and it’s getting more and more exciting. I mean, this episode had SO MUCH going on I need a minute to process everything that just went down……. this could take a while, may need to rewatch the damn episode. Ok, now that i’ve slightly gathered my thoughts and the ability to write lets start with the first storyline we visit this episode, that being Gordon Cole and co. having a tonne of important conversations. Gordon calls Frank Truman and gains the information that pages from Laura Palmer’s diary have shown up and indicate the existence of two Coopers. Meanwhile, Albert briefs Tammy on the origins of the Blue Rose case, where Gordon and Phillip Jeffries witnessed a woman named Lois Duffy killing her doppelganger right before disappearing. Ever since then, any case involving sudden disappearances has been linked to the Blue Rose case. And then, upon being briefed on the appearance of Major Briggs’ body and the ring of Dougie Jones, Diane gives us the revelation that her and Janey-E are actually half sisters………. what a small world. Now this is where the real shit kicks in, Gordon Cole enters the scene to an incredible quote…. “COFFEE TIME!!”. Yes Gordon, i agree, i am just as excited as you about coffee time. Then randomly and hilariously a window cleaner drops down to their window and starts making a tonne of loud screeching noises that messes with Gordon’s hearing aid. This is just the random, nonsensical distraction this scene needed. After putting out an arrest warrant for Dougie and Janey-E Gordon begins to give us a rundown of a dream he had last night, and now shit gets very real. “Last night i had another Monica Bellucci dream” he begins…. and before you know it we go into his dream and it’s an actual scene. 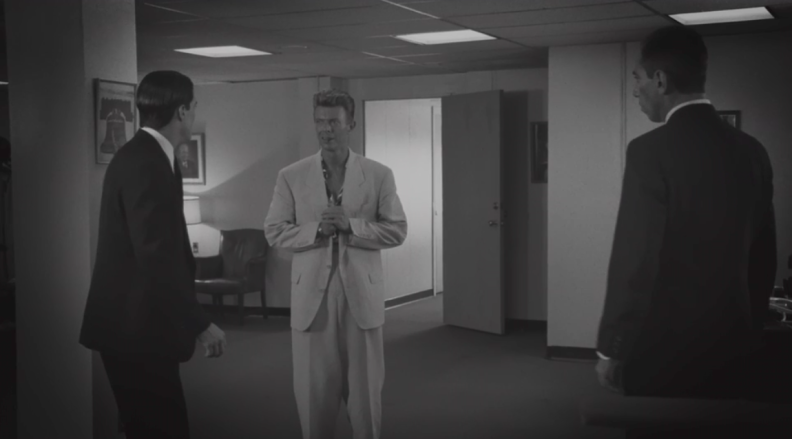 So we have Monica Bellucci who sits down for a coffee with Gordon and throws some pretty cryptic phrases including “We’re like the dreamer who dreams and then lives inside the dream” followed by the question “But who is the dreamer?”. And if you weren’t confused enough by the relevance of her comments the dream gets even more mysterious and also revealing. So Dale Cooper is there too, supposedly joining them for a nice cup of coffee but Gordon wasn’t able to see his face. Then at the instruction of Monica Gordon turns around to see a young version of himself at his desk whilst a young Agent Cooper tells him of a dream that HE had, this is a scene from Fire Walk With Me only with a black and white aesthetic this time around. But the importance of dreams is interesting. 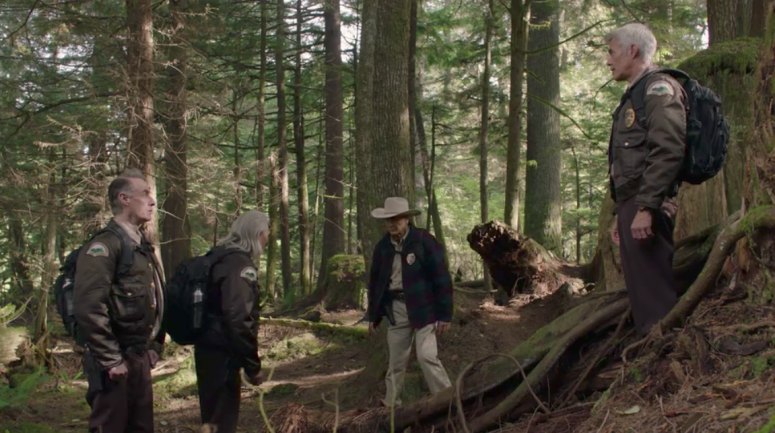 And then we see another scene from Fire Walk With Me recreated here in black and white and with a focus on a key line in that scene……. this is where i totally lost my shit. How long has David Lynch been setting up this season 3 storyline? It seems he’s had these ideas in his mind since the beginning because a scene that didn’t make sense 25 years ago now has all the fucking relevance in the world. The scene is where Phillip Jeffries appears out of nowhere, points to Dale Cooper, and says “Who do you think this is there?” before disappearing again. It makes total sense now, this wasn’t a message for the young Gordon, this was referring to the current events involving of Cooper’s doppelganger trying to get Gordon to realise who he is really dealing with in the real world. Maybe Jeffries just doesn’t know where he is in time…….. This sequence had me in awe at what I had just witnessed and I thought this was going to be the craziest thing to happen all episode…….. I was wrong.

Back at the Twin Peaks Sheriff Department Hawk, Bobby, Andy, and Frank finally arrest Chad for being a corrupt douchebag right before heading out into the woods. It looks as though two days has past since finding the messages from Major Briggs as Bobby has led them straight to Jack Rabbits Palace which is no palace at all, rather it is a broken tree trunk. From there they head east a certain distance and we get this long sequence of them walking through the woods with a chilling score that persists through most of this sequence. Suddenly they come across a cloud of smoke, electrical sparks, a pool of stuff, and a naked body of a woman lying on the floor. As they approach we see that the woman is none other than Naido, the lady with no eyes we most recently saw in episode 3 when Agent Cooper came across her, and here she is alive. 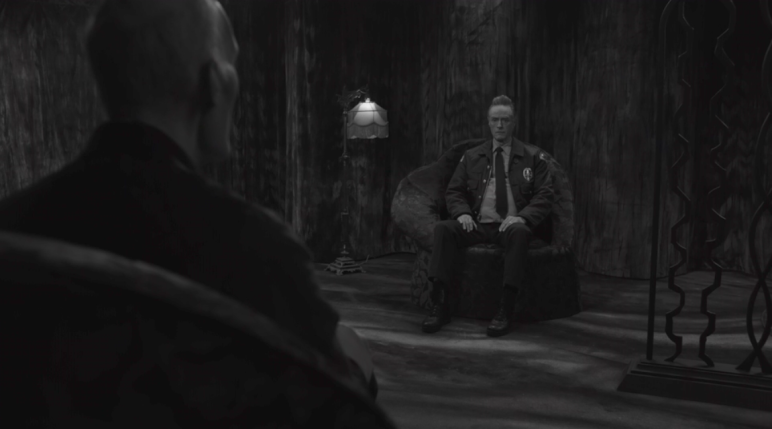 It then hits 2:53 the time specified by Major Briggs and then similar to what Gordon Cole experienced in episode 11 a wormhole appears above the group and Andy disappears as he gets sucked into it. He then appears in the same room Agent Cooper was in during the opening scene of season 3 equipped with the same black and white aesthetic and backwards filming technique. Then once again in his third appearance this season The Giant shows up and sits opposite him…. but this isn’t The Giant from the original series apparently. Throughout this season in the credits he has been listed as ‘???????’ but here in this episode he reveals himself as ‘The Fireman’. He then raises his hand and an object manifests itself in in Andy’s hands producing a cloud of smoke that rises to the ceiling. On the roof above him Andy is shown a variety of scenes from episode 8 as well as some new scenes. He sees the Experiment spewing out BOB’s orb, the abandoned gas station, “Got a light?”, Laura Palmer with Angels, Naido, the two Coopers side by side, and then a telephone pole. After obtaining all of this knowledge Andy disappears once again.

Hawk, Bobby, and Frank then seem to appear back at Jack Rabbits Palace with knowledge that something weird just happened but no recollection of what that something was. They are followed shortly by Andy who appears with Naido in his arms saying that “she’s very important and there are people that want her dead”. It seems that now Andy has all of this newfound wisdom about the stuff going on in Twin Peaks about Agent Dale Cooper….. what he does with this information i’m sure we are due to find out. After Andy leaves Naido in one of the jail cells we get a ridiculous scene with a bleeding drunk mimicking the sounds Naido makes, Chad yelling at him to shut up, the drunk mimicking Chad, and then the same order of events repeating itself a second and third time. What a way to end this sequence. 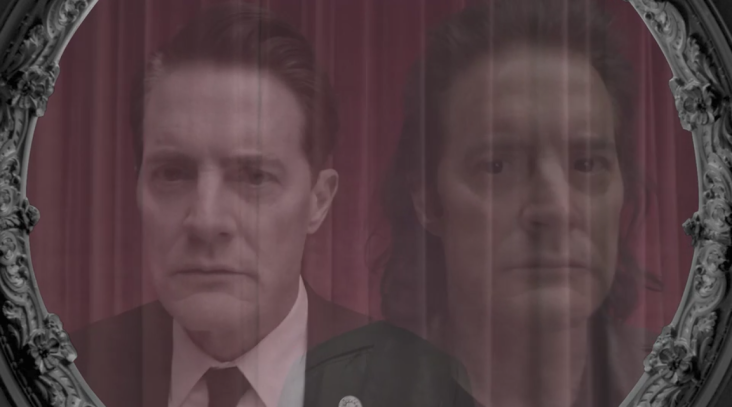 Then we cut to a scene that i honestly thought would be a one off with no connection to anything else going on this episode but then i was quickly proven wrong. We see James Hurley once again although here he doesn’t have a guitar in hand and is working as a security guard. He is having a normal conversation with a young co-worker by the name of Freddie when the topic turns to how and why he has a green glove on his right hand that apparently cannot be taken off. Freddie then tells a story of how he was sucked into a vortex, ended up floating in a void where he was approached by The Fireman (now we know who this is). The Fireman told Freddie to find an open package of rubber gloves where a single right handed glove remained and to put it on so that he would obtain the powers of the Iron Fist…… different show but you get the idea. Upon receiving the glove he follows the Fireman’s further instructions to move to Twin Peaks and find his destiny. The significance of this scene is something i hope we find out very soon, but i cannot end this section without wishing James a happy birthday….. party hard my friend.

Then we get another scene following Sarah Palmer….. or who we thought was Sarah Palmer. So we see her go visit a local bar and after sitting and ordering a Bloody Mary she is approached by a vile trucker. He starts talking shit to her, threatening her, verbally abusing her and in retaliation she threatens to eat him. Now at first you, along with the trucker think this quote is a joke, some insane sentence Sarah decided to blurt out in order to scare him off. But then she turns to the camera lifts her hand to her face and literally pulls her face off revealing a black void filled with smoke, a hand, and a large smiling mouth. She then closes her face and lunges as the trucker, ripping a hole in his neck. When everyone notices a dead guy on the floor her flawless explanation is that he just fell over…………. yeah, with a hole in his neck……. I don’t know what is going on with Sarah Palmer but it is weird as shit.

The episode ends with a pretty awesome performance but before that we get another update on Billy, Audrey’s lover who she is so desperate to find. But this time we get it from Tina’s daughter who also saw Billy jump over a fence with blood coming out of his nose and mouth. The significance of this search for Billy is still very unknown but if it makes Audrey happy then lets find Billy. So this episode was stacked with massive events involving scenes that date all the way back to Fire Walk With Me in 1992 and for a Twin Peaks fan this was awesome. We got a lot more with Gordon Cole and his Phillip Jeffries and Monica Bellucci dream, we got some major developments with the Sheriffs and Andy’s supernatural journey, and a mysterious green glove shows up that could be the key to unlocking something in a future episode.