Death Note, directed by Adam Wingard (‘Blair Witch’, ‘The Guest’) and released on Netflix is an American live-action adaptation of the incredibly popular Anime series from the year 2006. Death Note just happens to be the only Anime series i have watched in full so i was looking forward to seeing how the story would be adapted to fit a shorter film-length format. And for the most part i enjoyed what i saw, although it could have still been better. One of the issues with a lot of adaptations is that when they stray away from the source material they don’t have the same impact as the original, now where that could apply here too i don’t think the issues with Death Note lie with the changes in plot. The performances across the board were very strong and i found myself engaged in the lives of the main characters. Visually the film has a beautiful sense of style thanks to Wingard and is accompanied by a chilling score that sucks you into the Death Note world. It’s dark, fast paced, and somewhat psychologically thrilling but still doesn’t reach the greatness that is the Anime.

Nat Wolff plays the role of Light Turner and like many of the other performances i thought he was great. There are obviously character trait changes from the anime but i still feel like their representations here aren’t too far off. I found Wolff’s performance as Light for the most part very engaging to follow, i could get behind or disagree with the character very easily and he brings forward that ambiguity between good and evil that is a theme in the Anime and a strong theme throughout this entire film. Willem Dafoe was chilling as Ryuk, i honestly could not think of a better actor for the role and it looks like it just came so naturally for him as all he had to do was channel his inner Green Goblin. As far as being faithful goes Ryuk is as close to the anime as anything in this film gets. Lakeith Stanfield plays the infamous L and i thought his portrayal of the character was very fascinating. He emulated some of the quirks that are integral to his character but made the role his own in a way which made him so fascinating to watch.

As for the rest of the roles, Margaret Qualley puts in a great performance as Mia Sutton and is a great companion to Light in the film, she also has a very strong arc throughout the film. Shea Whigham is good as James Turner and Paul Nakauchi has a small but impactful role as Watari, L’s handler. 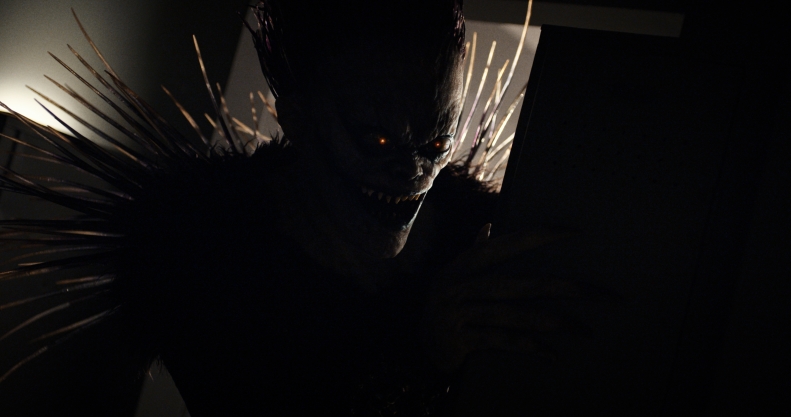 The plot of the film borrows from a number of events that occur within the original Anime but does stray far away from the Anime at times, especially as the film comes to a close. And i have to say I welcome these changes and prefer this approach than a direct translation from the series. A lot happens in Death Note’s 37 episodes so trying to translate all of that into a feature length film and have it work would be nearly impossible. I think they even struggled to cram everything into this film, and they went off track quite a lot. I liked the changes and the turns the film takes towards its finale but i still think it would have been more effective it it progressed at a slower pace and the story was split into two films. Because they gave themselves the task of covering a lot in a little over an hour and a half some of the daunting intensity felt throughout the original Anime isn’t represented as well here. There are some moments but not to the scale of the 2006 classic.

So in the end i have to say i very much enjoyed this film but it could have and probably should have been better. The fast pace did take away from being able to really focus on some key moments and as a result some stuff just flies by. The incorporation of blood and gore was ok but it did feel out of place, a little like a Final Destination film, it’s just there for the sake of being disturbing. There are other ways to be dark and gritty without blood and gore but it is what it is. The story i thought was good in the way it takes from the Anime but also spins events and does its own thing quite a bit. The ending raps up very quickly and again that just goes back to having to do so much in so little time. The performances are a big highlight and i would really like to see a sequel to this film just to see the new direction they could take things.