The Beguiled is a retelling of the 1971 film of the same name, both of which are film adaptations of the 1966 Thomas P. Cullinan novel also of the same name. The film is directed by Sofia Coppola and stars Nicole Kidman, Kirsten Dunst, Elle Fanning, Angourie Rice, Colin Farrell, and Oona Laurence in main roles. Set during the American Civil War, the young women at a Southern girls boarding school take in a wounded enemy soldier (Farrell). As he recovers in their care, sexual tension arises which causes conflict and rivalries within their establishment. Now I went into this movie without having seen the trailer due to hearing that it spoils everything and I can confirm that it basically does. I still had a good idea of what to expect from this drama/thriller, yet what I got was not as incredible as I’d hoped it would be. The performances are great, Sofia Coppola’s directing and visual flair add to creating an authentic atmosphere for the particular period, and the way it explores feminism, gender norms, and the sexual objectification of men is an interesting element. But the plot overall fails to grab me emotionally, is quite flat, and lacks any real impact in its most crucially important story moments.

I will begin with the performances because I feel like this is the most successful component that allowed me to stick with the film right to the end. Nicole Kidman (Martha) and Colin Farrell (John) are the two exceptional standouts who play their roles about as well as you’d expect these very experienced actors to do so. Much like every character in here there is a duality to their personalities that shines through in the intricate details of their performance such as facial expressions alone and it’s just great to watch. Kirsten Dunst (Edwina) also puts in a strong performance as a character who at some points I liked but at others I found myself hating, but that was part of the duality of her character. Where I was most impressed by the performances was with Elle Fanning (Carol), Angourie Rice (Jane) and Oona Laurence (Amy), three young actresses have proven themselves before and do so once again. Elle Fanning who was mesmerising in last year’s ‘The Neon Demon’ shines here too and her interactions with Farrell’s character were some of her strongest moments. Oona Laurence is a young actress who showed signs of talent in ‘Pete’s Dragon’, ‘Southpaw’, and ‘Bad Moms’ but here is exceptional in a very vulnerable role that she executes fantastically. I loved seeing Angourie Rice in action again as she bought so much personality to ‘The Nice Guys’ (2016) and she continues to be great here too. 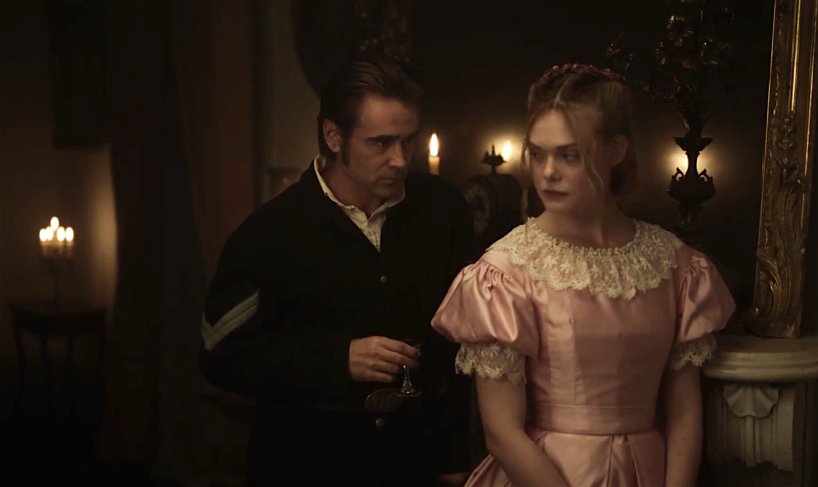 I will take this time to congratulate Sofia Coppola on being only the second female director to take home the Best Director award at Cannes Film Festival for her accomplishments on this film. What she brings to this film with her visual flair is fantastic, she creates an atmosphere here that is dark, gloomy, and sets a tone that stays consistent the whole way through. In a way, the plot adapts itself over time to fit the tone which is well applied by Coppola. Coppola has crafted this remake with a feminist take on events and this is very clear with the handling of Colin Farrell’s character and his relationships with these women. I liked the way it touched on the sexual objectification of Farrell by these women in a clever and thought provoking way that doesn’t come across as trying to hammer you over the head with a message. Where this film is a severe let down is that despite the intriguing atmosphere and the excellent performances the plot failed to hook me the whole way through. I found myself waiting for something to grab me, somewhat shock me, and give me some sort of strong emotional investment in the story but it never came. Because of that all I had were great performances to admire and that’s good but without a compelling story it let me down a lot.

So in the end The Beguiled is a film that parts of which I love, certain elements such as the performances I believe are exceptional and Sofia Coppola being recognised for her achievements is well deserved. But as I found it hard to really get invested in the story this meant it was missing something for me to enjoy. Other people will have and (have already had) different experiences with this film and potentially enjoy it much more than I did and I think that’s great, I’m almost jealous of them as i wanted to love this just the same. So do check this film out for yourself if it is something you’d enjoy but do yourself a favour and don’t watch the trailer….. Read the synopsis, maybe even look as some screenshots to get a feel for the tone, but after watching the trailer after seeing the movie I can say it does spoil almost the entire movie… a marketing decision that I don’t understand….