Acclaimed writer/director Noah Baumbach is back with his latest character centric story focusing on a dysfunctional family who put their quarrels aside to come together and celebrate their ageing father’s artistic work. The Meyerowitz Stories (New and Selected), a drama/comedy, boasts an all-star cast from Emma Thompson to veteran actor Dustin Hoffman and comedic giants Ben Stiller and Adam Sandler who all supply us with outstanding dramatic performances featuring a slight comedic edge. On top of the impressive cast, Baumbach shines with incredible writing providing quick and intelligent dialogue that feels very real and natural to these characters.

I will begin with the dialogue because from start to finish it is very rapid, smart, and utilised in a clever way to deliver much of the story and character history through wholly engaging conversations. Baumbach does a fantastic job at capturing this dysfunctional family dynamic through each of the characters’ interactions making for many entertaining yet meaningful conversations that blend emotional moments with a bit of wit here and there. The pace of the dialogue results in ‘blink and you’ll miss it’ situations as so much crucial character and story information is delivered casually through the natural course of dialogue between characters. It is a genius way to provide character backstories and fill in gaps between key events without unnecessarily taking up large chunks of the runtime and Baumbach executes this flawlessly. The dialogue peaks in one scene late in the film between Stiller and Sandler which is equal parts emotional and amusing and is the scene that would play during Baumbach’s potential nomination during the Oscars. 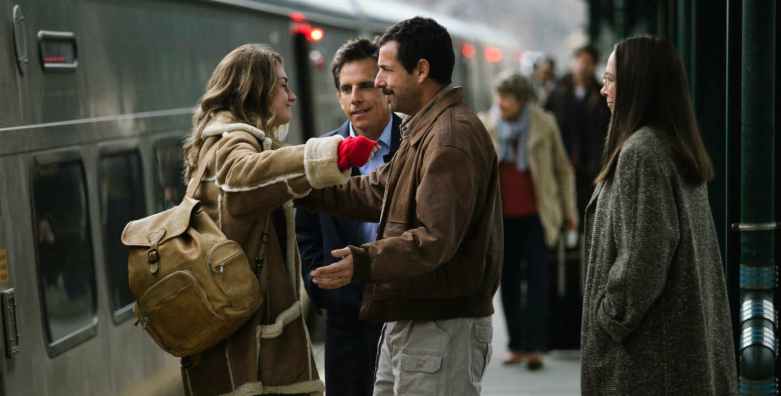 The story itself takes the approach of focusing on a few key moments within the lives of the Meyerowitz family that are all connected via a number of major and minor narrative through-lines. Much like the dialogue, it progresses at a rapid pace moving through time and from significant moment to moment without pause, and it holds this pace consistently right up until the last 10-15 minutes. This last section is edited and arranged quite oddly in contrast with the rest of the film, it does offer closure to the story and characters but is a pretty jarring way to close out what is otherwise a fantastic story. The story is at times quite emotional and you start to feel for these characters later on who are so greatly set up in the first half, but at the same time it has a lighthearted feel to it with humour that is delivered through character personality and interactions. None of it seems forced as it all comes from the natural clashing of these distinct personalities and it works so damn well. What also helps convey the humour and fun/lighthearted moments is the fantastic playful score by legendary composer Randy Newman. It keeps things upbeat and some moments in a more positive light but also emphasises the more sombre moments and it just elevates many moments that wouldn’t have been as engaging otherwise.

Now for the performances which across the board are incredible. Dustin Hoffman plays Harold Meyerowitz, a retired sculptor who is now quite senile, grumpy, and very observant in what I believe is his best performance in a while. Hoffman is the life of this story, he injects a tonne of emotion and humour into every scene and is an absolute joy to watch interact with other characters. His experience is on full show here as he never once breaks character, staying true to Harold’s mannerisms right to the last. Could we be talking an Oscars nomination here? It’s too early to tell but I hope so. Ben Stiller once again portrays Dustin Hoffman’s son in Matthew, a successful businessman with his own business and the most mature or sensible of his siblings. He really steps up his game in the dramatic department and does a really good job at selling the more powerful moments of the film as well as getting some humorous moments in on occasion. His on screen chemistry with Hoffman is one of the biggest highlights here, their back and forth interactions are immensely entertaining  and offer a number of memorable moments. 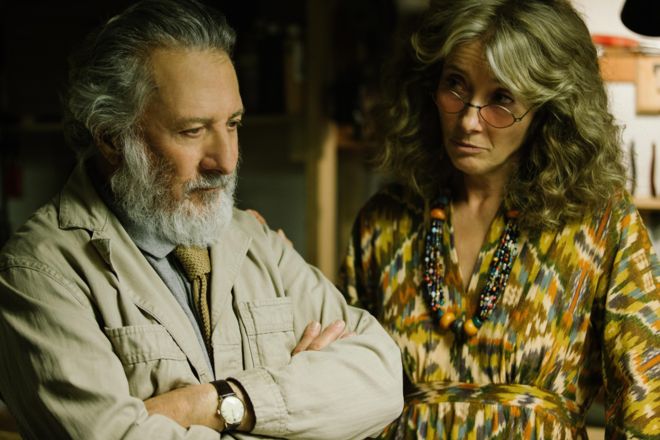 Adam Sandler portrays Hoffman’s other son Danny, an unemployed musician who is family oriented and has a touch of social anxiety. This is a more dramatic role for Sandler where he really proves his worth as a dramatic actor (as he has done occasionally in the past, but not to this level of success) and manages to make the most of his comedic abilities where required. He puts in a performance here and delivers his lines to where you forget his recent failed comedic efforts and appreciate his acting talent. Emma Thompson plays Hoffman’s wife Maureen and when does she ever not produce an amazing performance. Her quirky and unique character is the most ridiculous of the bunch but still grounded by the real and confronting events happening around her. Now where these are great individual performances, the way they all interact with each other and share such a real and believable family bond ties them all together and elevates all of their performances as one unit.

So in the end, The Meyerowitz Stories (New and Selected) is a brilliantly written and directed movie from Noah Baumbach featuring an all star cast who bring their A-game and have incredible on-screen chemistry that brings this fictional family to life. The dialogue is something truly spectacular and manages to capture you in every scene with rapid delivery that never lets up. One sequence (I won’t mention to withhold spoilers) feels a little too silly and the ending for me was jarring and doesn’t quite work but other than those minor quarrels this is a film you should definitely check out upon its release.

This was originally posted on the AU review / The Iris: