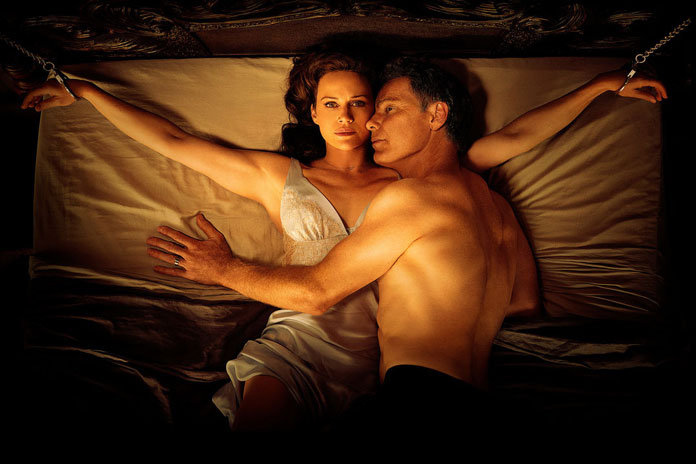 Directed by Mike Flanagan and based on a Stephen King novel, Gerald’s Game was a massive surprise and much better than I had expected, mainly due to the fact that so much of the plot was hidden to me going into it which led to many surprise twists and turns. This movie is about much more than just Carla Gugino’s character Jessie trying to escape her predicament and goes deep into her character’s mind and troubled past. There is also this side plot which develops in amazing fashion over the course of the film, is starts off as this small horror element with a Death-like figure appearing here and there, supposedly in Jessie’s mind. But it then expands the mythology of this character in the final 10 minutes to add an entire new layer to the film that only makes it better on repeat viewings. 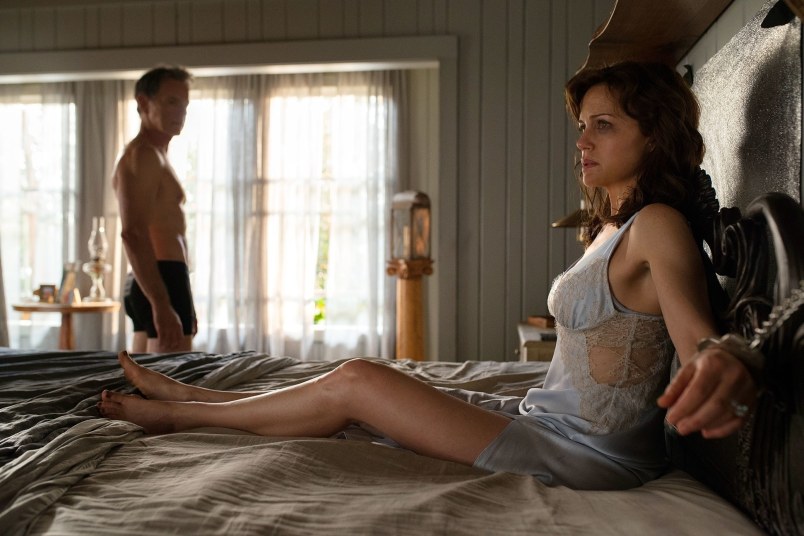 One of my favourite dynamics throughout the movie was the presence of Bruce Greenwood’s Gerald appearing as a figment of her imagination and then later the appearance of another version of herself. This was a genius way to populate the screen with more than just a single character in a way that made complete sense as far as the plot goes. Gugino is constantly talking with these hallucinations, arguing, debating, and this is a great visual representation of what is going through her mind and it is chaos. When she starts to hallucinate another version of herself that is where it gets extremely interesting to me because now you have this good cop and bad cop or angel and demon dynamic which leads to some great dialogue sequences and you learn a lot about her character and her past, which plays a large role in the meaning behind the film. Where this element gave Greenwood a place to play a very creepy and unsettling role it also allowed Gugino to essentially play a dual role, one version of Jessie that is scared, in physical and mental pain, and has been repressing horrible events of her past, and another that is strong, a voice of reason for her, and helps her overcome the chains she has been in her whole life. The way Gugino pulls off this duality so consistently in every scene is fantastic and is why it’s one of my favourite performances of the year.

Now lets get into that horribly disturbing side plot involving her abusive and manipulative father and how it is used geniusly to aid in her learning from the past, and letting go of her fears in order to help herself. So during various flashbacks we learn about Jessie’s childhood in which she was sexually abused by her father in a truly horrifying scene and then shamed into hiding the event in fear of it being her fault. It is an event that has shaped her as an adult as she has constantly repressed her feelings and the truth about the events to the point of seemingly no return. Our revisiting of this era of her life puts her on the track of acceptance and coming to terms with what happened and using those once forgotten memories to escape….. quite literally. It is only when she chooses to relive those moments in her mind and finally makes it past that terrible event that she is able to find herself and find the courage to escape. This is in the form of remembering when she broke a glass in anger as a child and she uses that newfound knowledge to eventually escape. It is quite metaphorical in a very obvious sense, in order for her to escape the chains that have held her down (literally and figuratively) she had to revisit her past, face the facts of what happened, and use that for good, which is what it does.

This side-plot also brings greatly handles the use of the eclipse to represent that shame-filled life of hers that began that day on her fathers lap. Since that day she had been living in the moonlight, and hasn’t moved on from the event, but after this tragic event in which she escapes you see her use her experiences for good. She takes the insurance money from the death of her husband, uses it to repair her hand and start up her own foundation dedicated to helping other children who have been affected by sexual abuse in overcoming their pain and being stronger than that. Her moving on is phenomenally and very subtly expressed through the final shot in which as she walks down the street the eclipse in the sky finally fades from the picture indicating a clear and unhindered road ahead. A very meaningful plot that paid off incredibly thanks to a few moments during her imprisonment but most notably that final 10 minutes which elevates all of the events to new levels, including the supposed horror element. 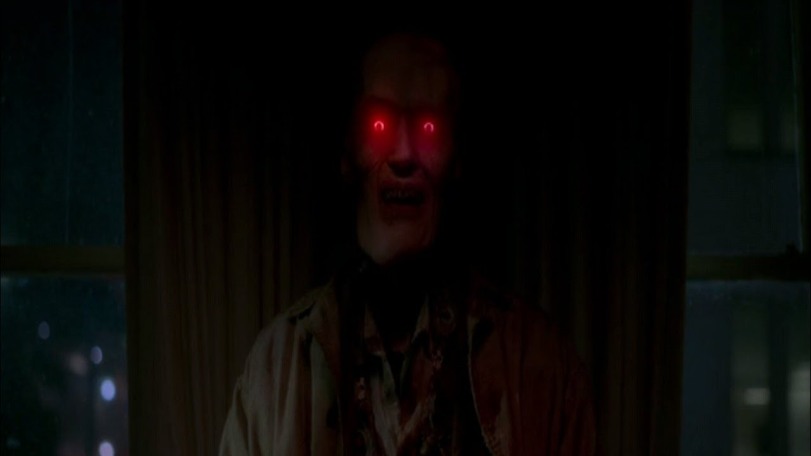 The way this seemingly very minor plot progresses very slowly and in short bursts gave me the impression that this was merely supposed to be a terrifying element that was effective in creeping me the fuck out and a great representation of Jessie hallucinating the looming presence of death. And then the final 10 minutes happened and everything falls into place. As it turns out, the appearance of this figure was not entirely within Jessie’s imagination, he was in fact a real person by the name of Raymond Andrew Joubert played by Carel Struycken (Twin Peaks), a grave robber and serial killer suffering from acromegaly resulting in overly sized body proportions. This explains that he was there in the room with Jessie when she saw ‘Death’ and also explains why there was a footprint in the blood when at the time he was just in her mind. I actually made a note to remember the radio broadcast about the grave robber in the beginning but then when the main plot expertly grabbed my attention I completely forgot this detail until I revisited it.

And then we get a great courtroom scene at the end of the movie in which Jessie confronts Raymond and upon seeing her he says the line “you’re only made of moonlight” potentially referencing the darkness in her and her damaged mindset in which she fears her past. But then she hits him back with the final line “you’re so much smaller than I remember” indicating that Jessie has in that moment put everything behind her, all the pain, torture, and fear, and is shaping her future in the way that she wants to. One thing i’m not 100% sure on is that if Raymond was in fact in the room with Jessie why he didn’t kill her while he could, I mean, i’m assuming he assisted the dog in taking a few pieces from Gerald so why he wouldn’t go for Jessie i’m not quite sure. AHA! And just as I mentioned that I remembered one small detail, upon finding Raymond’s family (sister and husband) it was stated that although both were dead he had only taken pieces from the husband, showing that he must have favoured or at least stuck to mainly the men. I guess Jessie got lucky there.

So there we have it, those are the main spoiler filled moments that I loved which predominantly take place within the last 10 minutes of the movie. The ending to this story was incredible and elevated my enjoyment with it to a whole new level and I hope it had the same effect on you.

If you are looking for my official review of the film accompanied with a score you can find that here: ‘GERALD’S GAME’ (2017) Movie Review – Throws You Deep Into Madness And Insanity