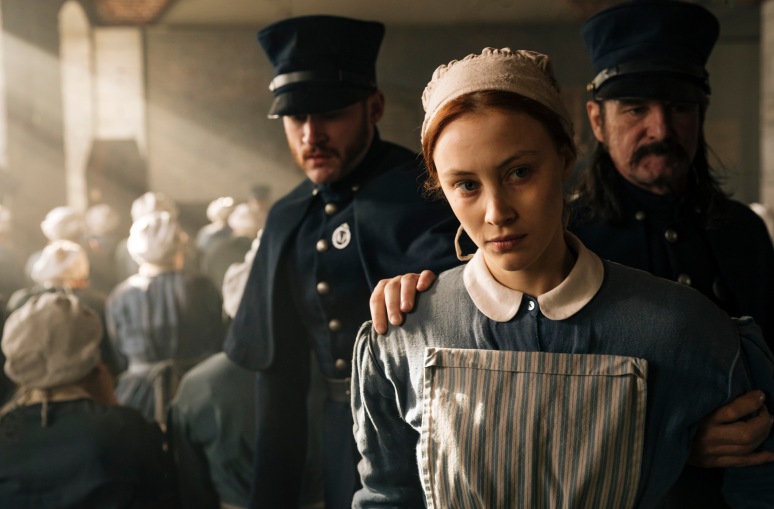 Alias Grace is a Netflix Original Series inspired by the historical true story of Grace Marks, a convicted murderer, and is based on the 1996 novel of the same name by Margaret Atwood. The six episode miniseries is written and produced by Sarah Polley, directed by Mary Harron (American Psycho), and stars Sarah Gadon (11.22.63) as Irish-Canadian immigrant Grace Marks. The series follows Grace (Gadon) who in 1843 was convicted of the murders of her employer Thomas Kinnear (Paul Gross) and his housekeeper Nancy Montgomery (Anna Paquin). Grace was subsequently sentenced to life in prison for her alleged crimes where she is visited by Dr Simon Jordan (Edward Holcroft) who seeks to understand exactly what happened the day of the murders, but in order to get to that day he must listen to her story from the beginning. Alias Grace opens as a typical murder-mystery with the crime in question at the forefront of the conversation, and as the show progresses the events that unfolded that day in 1843 remain a key focus. But with each passing episode you realise this is more than just a murder-mystery, it is a very personal story, a deep character study exploring Grace’s life, and a tragic one at that. She is at the forefront of every moment as you learn and uncover more and more about the good, bad, and horrifying moments that led to her spending 15 years in prison. The vast majority of this series takes place in the past where through her recounting of events to Dr Jordan and her enlightening voiceover we gain a lot of insight into her life and how her mindset is altered through some intensely stressful moments. We are along with Grace throughout almost every minute so we see her side of events and how certain moments really unfolded, but this is still a story riddled with uncertainty and demands your full attention for its entire six episode run in order to put the pieces together. 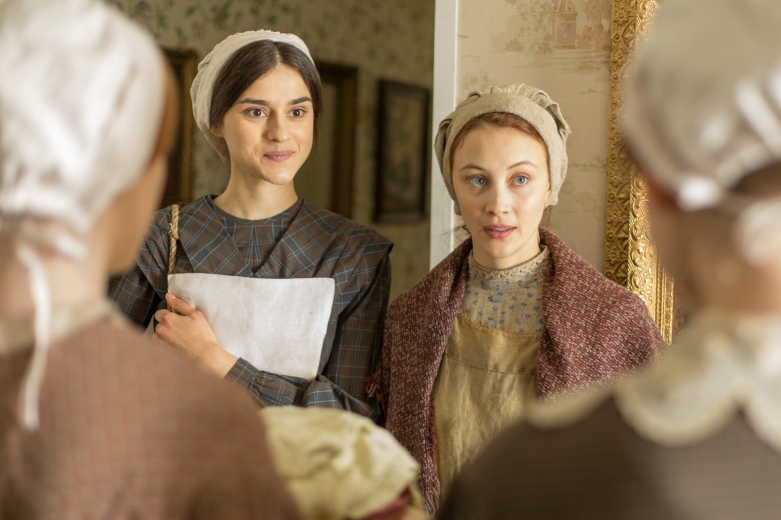 Remaining invested here is absolutely not the most difficult task you will undergo this year, in fact, it is one of the easiest things to accomplish due to a number of factors. Firstly, due to the entire plot taking place over only six episodes the slow nature doesn’t drag things down or have any negative effects because all of the key moments are closer together making it seem quite fast paced in terms of it being very eventful. Once you move on from the buildup, execution and resolution of one key part of Grace’s story you are thrown right back into the mystery with barely a chance to breathe, which is a good quality that hooks you into continuing this story. Another factor is the dialogue which is some truly brilliant writing from Sarah Polley and originally Margaret Atwood. The dialogue alone whether it be Grace’s voiceover or conversations between various characters is ever so poetic and captivating, sucking you into this time period and granting the series a certain level of authenticity. There are many subtle clues to the story within the dialogue and I found myself constantly getting lost in listening to Grace’s voice giving further insight into the on-screen events. 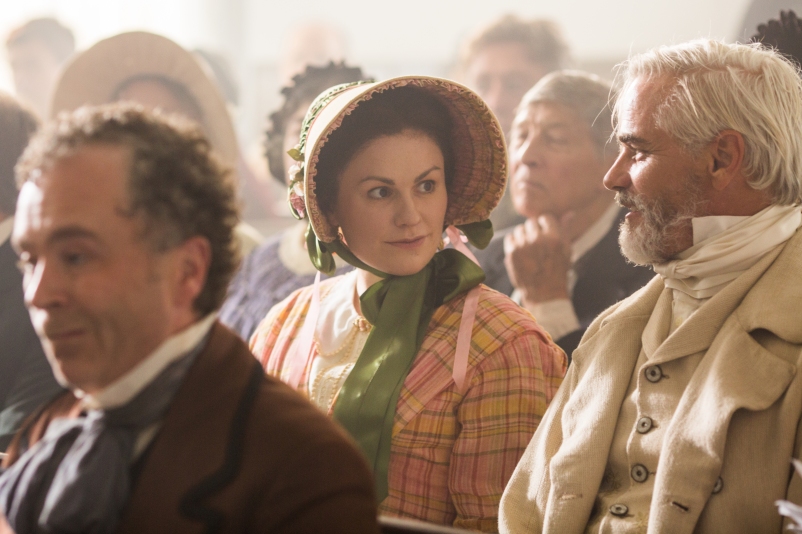 Speaking of subtlety, Sarah Gadon’s performance is phenomenal from start to finish. She commands the screen in every scene, delivers dialogue with much conviction, conveys drastic emotional highs and lows incredibly well, and right down to the subtleties of her character never once breaks formula. As Grace is the titular character it is crucial that the audience is able to form a strong bond to her early on as without an emotional investment into her story this series wouldn’t work. Gadon disappears into the role to where all of the subtle obsessive qualities about her character she has nailed down consistently. During her sessions with Dr Jordan, Grace is instinctively and obsessively sewing patchwork and where this may seem to be a minor detail, Gadon’s level of concentration during these scenes places such an importance on this detail that it becomes an integral part of understanding her character. One additional factor Gadon executes amazingly well is her ability to convey a range of emotions through subtle facial expressions alone as her character isn’t given much chance to emote too expressively due to her social position. 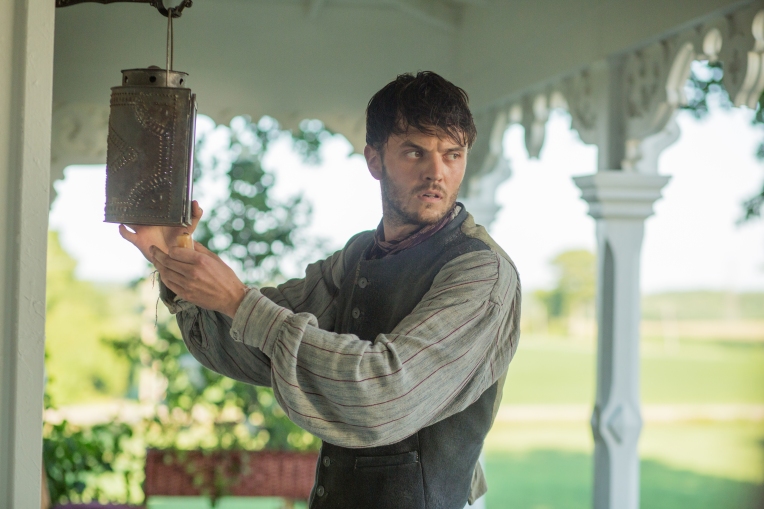 As far as the secondary performances go and the handling of their characters in the story I feel like some of them are well developed where you are able to learn about their personalities but also some aren’t all that engaging or memorable. The exploration of Edward Holcroft’s Dr Jordan is handled very well as time is spent exploring how Grace’s story gradually unravels him and affects his overall feelings about the case and Grace herself. Holcroft does a great job as the straight-faced doctor and where his character goes through changes over the course of the story he portrays the characters complexity really well. Anna Paquin makes a welcome appearance here in a pivotal role as Nancy Montgomery and for the most part her performance was very strong. The character was well fleshed out and developed to the point where some of her more questionable actions are understandable once you get a grip on the type of person she is. And Zachary Levi makes a number of appearances as a peddler by the name of Jeremiah and for his limited amount of screen-time I find myself radiating towards his character more-so than some others featured more heavily.  But then characters such as Thomas Kinnear (Gross), Jamie Walsh (Stephen Joffe) are present for some time but not fleshed out enough to where I am able to get a grip on exactly who they are or show an interest in them. 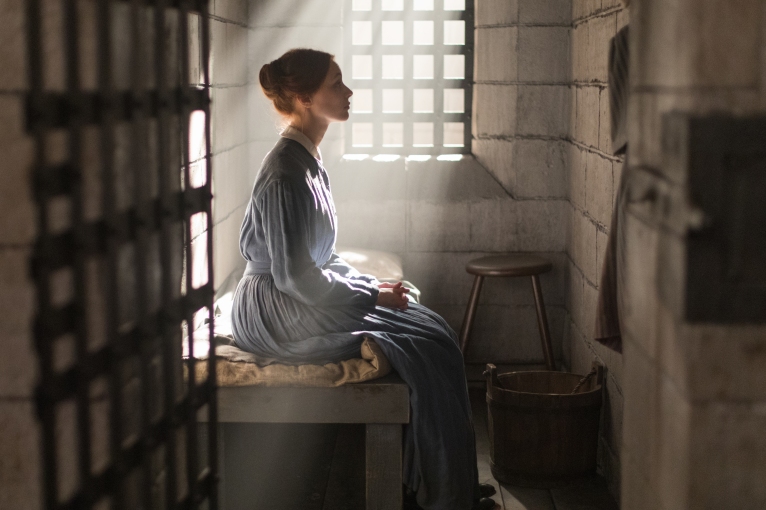 So in the end, Alias Grace is a mesmerising and compact six episode series that takes a simple murder-mystery plot-line and turns it into an intriguing character study with themes of identity and suffering and is very accurately placed in its mid-1800’s setting. The use of incredibly written dialogue along with the phenomenal lead performance and consistent pacing will have you hooked in and wanting to binge all episodes in a single night. My major criticism aside from some of the secondary characters has to do with the way one character and a certain relationship is resolves in the final minutes. This chosen sequence didn’t quite fit in with the way the final moments of this series were progressing in terms of character motivations. I feel like this decision was made just in order to close out one fairly (at this point) minor looming detail that was present from fairly early on. Other than that, this is an exceptional miniseries that I definitely recommend checking out and with only a four and a half hour commitment there is no reason not to.

All six episodes of Alias Grace were watched for this review. All episodes will be streaming on Netflix from November 3rd.

This was originally posted on the AU review / The Iris: