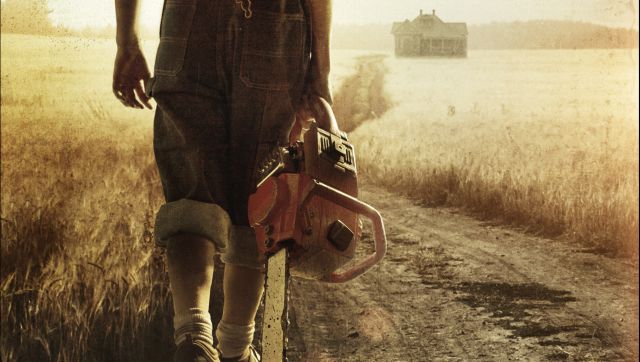 Leatherface takes you back many years prior to the events of The Texas Chainsaw Massacre (1974) in order to witness the birth of a psychopath. The film follows the youngest of the infamous Sawyer family who is admitted to a mental hospital and 10 years later escapes amongst a group of inmates kicking off a bloody manhunt that would shape him into the iconic face-wearing chainsaw wielding monster. There is something about the ‘Texas Chainsaw’ series of films that continue to draw me in, the Sawyer family and history behind the villains created by Kim Henkel and the late Tobe Hooper I enjoy watching and it keeps me coming back. I have seen all of the films including the most recent Texas Chainsaw 3D (2013) starring Alexandra Daddario and I even got a good kick out of that one. But this right here is a B-movie at best, littered with bad performances, a dull plot, and barely a sense of tension, this entire thing is just straight up boring.

The majority of the film sees you following a group of escaped patients Jackson (Sam Strike), Bud (Sam Coleman), Ike (James Bloor), and Clarice (Jessica Madsen) alongside an abducted nurse Lizzy (Vanessa Grasse) as they continuously try to evade the police. Aside from Lizzy, there isn’t a single character here I was interested in watching at all, no-one is developed beyond very basic one-note character descriptions. They try to play the sympathy card with both Jackson and Bud but the fact that they’re violent people who have just escaped from a mental hospital makes it hard to give a shit about them. And then you have Ike and Clarice who are the crazy asshole psychopaths who you are supposed to hate but the over exaggerated craziness of their performances made them annoying. It’s like they were going for a Joker and Harley Quinn vibe with these two and failed miserably. Lizzy you can at least root for, they establish early on that she’s a good person so you naturally want her to get through this, but over time she makes some monumentally dumb decisions which at around the half way point made me give up on her too as she deserved to die as much as the rest of them.

The performances behind the characters really don’t help, the entire cast (or most of it) is made up of random people you’ve never heard of who have barely a lick of experience and it shows. Finn Jones (Iron Fist) plays Deputy Sorrel in here but he maybe has a total of 4 minutes screen time making his entire role in the film a complete throwaway. Most of the experience comes from Stephen Dorff who plays Sheriff Hal Hartmann and Lili Taylor who plays Verna Sawyer and the experience pays off because they are considerably good in their roles. They both don’t have a tonne of screen time but they have enough to where I can enjoy the scenes they are present in and feel some sort of investment in the story. I would have much rather seen this movie focus solely on or spend most of its time with the Sawyer family doing more psychopathic Sawyer family stuff as oppose to these random mental patients. The opening sequence which does revolve around the Sawyer family is great and at that point I was loving it, then they break away from that, jump 10 years and all of a sudden I didn’t care anymore.

The horror and tension also isn’t really there, sure there’s blood and sure there’s two characters who are insanely unpredictable with a gun in their hands but that doesn’t amount to anything. Gruesome doesn’t equate to scary and there really isn’t any tension because you know more or less how it’s going to go down, who is going to survive, who won’t, and there’s nothing to gain from this story. It sells itself as showing the origins of Leatherface but really you don’t need an entire film to know why Leatherface does what he does. At most you just need the opening sequence and that’s it, sure some events lead to further crafting this evil persona but in the end this really didn’t need to be a thing.

So in the end, I say skip this movie and check out any of the other Texas Chainsaw films, not all of them are as phenomenal as the original but they are much more thrilling and enjoyable that this borefest. The majority of the performances aren’t anything to get excited over and those that are god are barely featured so not worth sitting through everything else. The story itself isn’t gripping and the stakes aren’t very high making this a poor attempt at revitalising this franchise. They’ve done it all now…… sequels, prequels, reboots, a sequel-boot, and as much as i’d love to see another great Texas Chainsaw film I highly doubt it’ll come any time soon if at all.