The Cloverfield Paradox has a number of flaws and plenty of room for where improvements can be made but it is still overall (for me at least) a good enjoyable film. There are also a number of details in this movie that I want to touch on that could not be done in my regular review as they are full of spoilers, so turn away now and check out my NON-SPOILER REVIEW if you have not seen the movie and don’t want to be spoiled.

One thing I want to mention off the top is that before this movie dropped on Netflix, even when it was just a rumour I wasn’t sure why a Netflix release would even be considered for a film in the Cloverfield franchise. But now after seeing the film I know why. From the outside it is still a space survival thriller and there have been an abundance of these movies in recent years. I feel like a theatrical release will get Cloverfield fans in seats but the general audience I don’t think will show up. So a Netflix release is clearly a safer and probably better option.

I want to get a couple of the negative spoiler-filled moments out of the way first so I will start with something that I touched on in my non-spoiler review, the third act. The tone made the switch in the third act from a survival horror film to a more generic action thriller that didn’t really offer anything new. Once the character Jensen (Elizabeth Debicki) reveals her oddly random ulterior motive to kill everyone and hijack the space station the whole movie changed. It was like the horror elements were sucked out into the vacuum of space, no more weird events were happening for some reason and it became a generic space story that has been done a number of times. It’s almost as if the Jensen character was included to be part of a great horrifying moment and then the writers just didn’t know what to do with her beyond that point. 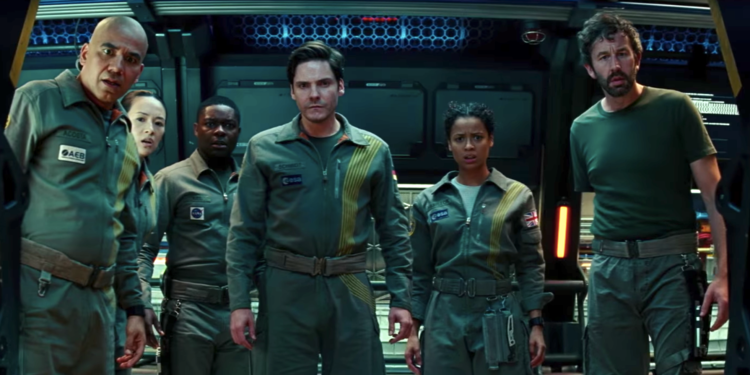 Now the film takes some time away from the space station to follow Roger Davies‘ character Michael who is on his own mini journey back on Earth. I don’t feel like any of these scenes are at all necessary, I get that the purpose of them is to show the state of the Earth after the space station has disappeared but only one of them is necessary to get the point across. It is an uninteresting side-plot that did not need to be in here.

I like that in this entry to the Cloverfield anthology the villain or main threat of the film isn’t a living thing at all. This is a story of man vs science, and unfortunately for humans that never goes well. It is cool how physics and the laws of space-time are the dangers causing this team of scientists a whole world of peril. It’s a refreshing take on the horror and space survival genres that had me thoroughly enjoying the movie…. when it’s the focus.

Another interesting little detail in here is that the guy who is delivering the report on the cloverfield paradox in the beginning of the film, played by Donal Logue is named Mark Stambler. Stambler is the last name of John Goodman‘s character in 10 Cloverfield Lane. How the two are related is unclear but as per my next point the two of them may never have met.

But the biggest moment I want to talk about is that final moment where out of the clouds a large monster similar in appearance to the original Cloverfield monster emerges and roars. Now this monster is much larger than the original monster and it seems to be on an Earth that doesn’t previously seem to be aware of anything like this happening before. Now with the revelation that this particle accelerator is the cause of these monsters appearing and the revelation that multiple dimensions exist in the Cloverfield universe this changes the game for the past and future of the Cloverfield franchise. What this suggests to me is that where we previously believed that the anthology films were unconnected but still in the same world it can now be understood that these films aren’t even on the same Earth. I believe all three of these movies take place on seperate Earths and at seperate times where the monsters in each of the films made their way to their respective Earths as a result of the experiments in this film.

I love the way this has all panned out and now has me looking forward even more to the next Cloverfield film and how it will be even more different again. It is currently rumoured to be titled Overlord but that will probably be changed between now and whenever it decides to spontaneously release.