This review is covering episodes one through five of season three without spoilers. 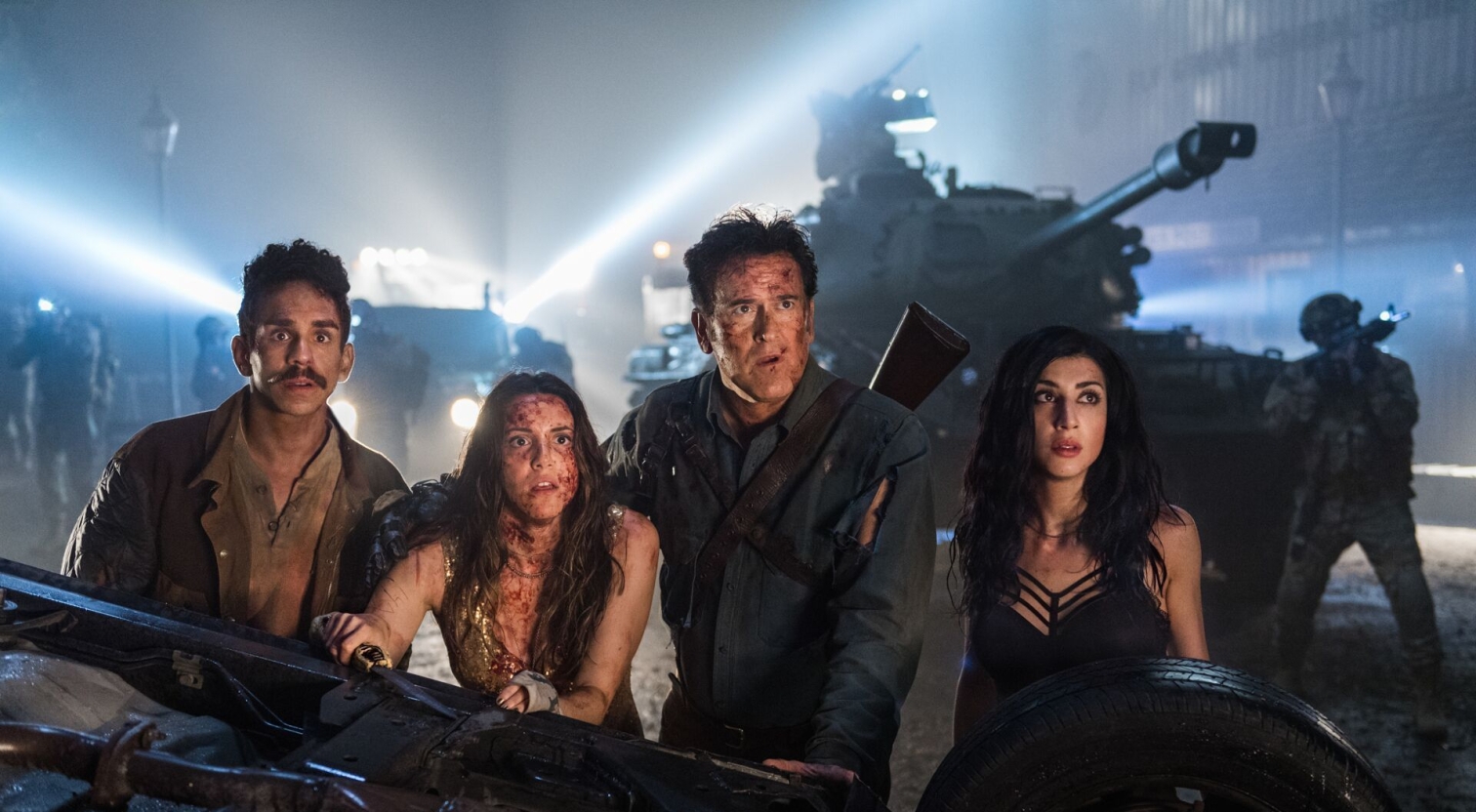 Ash vs Evil Dead has returned once again for its third season and proves that this classic franchise still has a lot left in it as long as Bruce Campbell’s Ash is blasting away Deadites. When this season opens Ash, Kelly, and Pablo have been somewhat moving on with their lives since supposedly ridding the world of evil, but it isn’t long before this same evil catches up to them and brings everyone together for another Deadite-killing adventure. Dana DeLorenzo and Ray Santiago of course return as Kelly and Pablo to kick some more demon ass, and so does Lucy Lawless as the conniving Ruby who I just love to hate. This season also sees the inception of a couple of new faces who bring a breath of fresh air to Elk Grove and may or may not play a major part in the series going forward.

The OG crew are back and they’re just as great as ever, Ray and Dana have such a grip on their characters’ rich personalities that it makes them so much more enjoyable to watch. They still share a close bond and chemistry that allows for a number of hilarious rather gut-busting moments but also some nice character moments too as they are both still growing as demon killers. With each season and even with each episode Kelly is continuously becoming more and more badass and Dana seems to be embracing the part and going deeper with her characters’ emotions, adding a lot to each of her scenes. Within these first five episodes both Kelly and Pablo have their own arcs which develop their characters further and build upon what we’ve learnt of them up to this point. But this trio would not be complete without the presence of Ash who in the most chaotic ways possible always manages to keep this family together. I shouldn’t need to go into how good Bruce is in this season because for 37 years he’s never lost his grip on the character of Ash. Here Ash is even more of a shit-talking hero than before (if that’s even possible) and he’s just the heart, soul, and dick of the show.

The comedy continues to hit left right and centre and this season it still manages to hit you when you least expect it. Everyone chimes in to the humour from the core cast to minor characters, and it constantly hammers home the absurdity of the world Ash lives in. The funniest moments come from either Ash’s one-liners, character dynamics clashing, or the slapstick brutality…. with an emphasis on the latter. As good as almost every moment of the show is, there are those moments every season that shock you, gross you out, and make you laugh hysterically all at the same time. And just as season two had the morgue sequence, this season has a couple of moments that rival that scene and this is only the half way point. 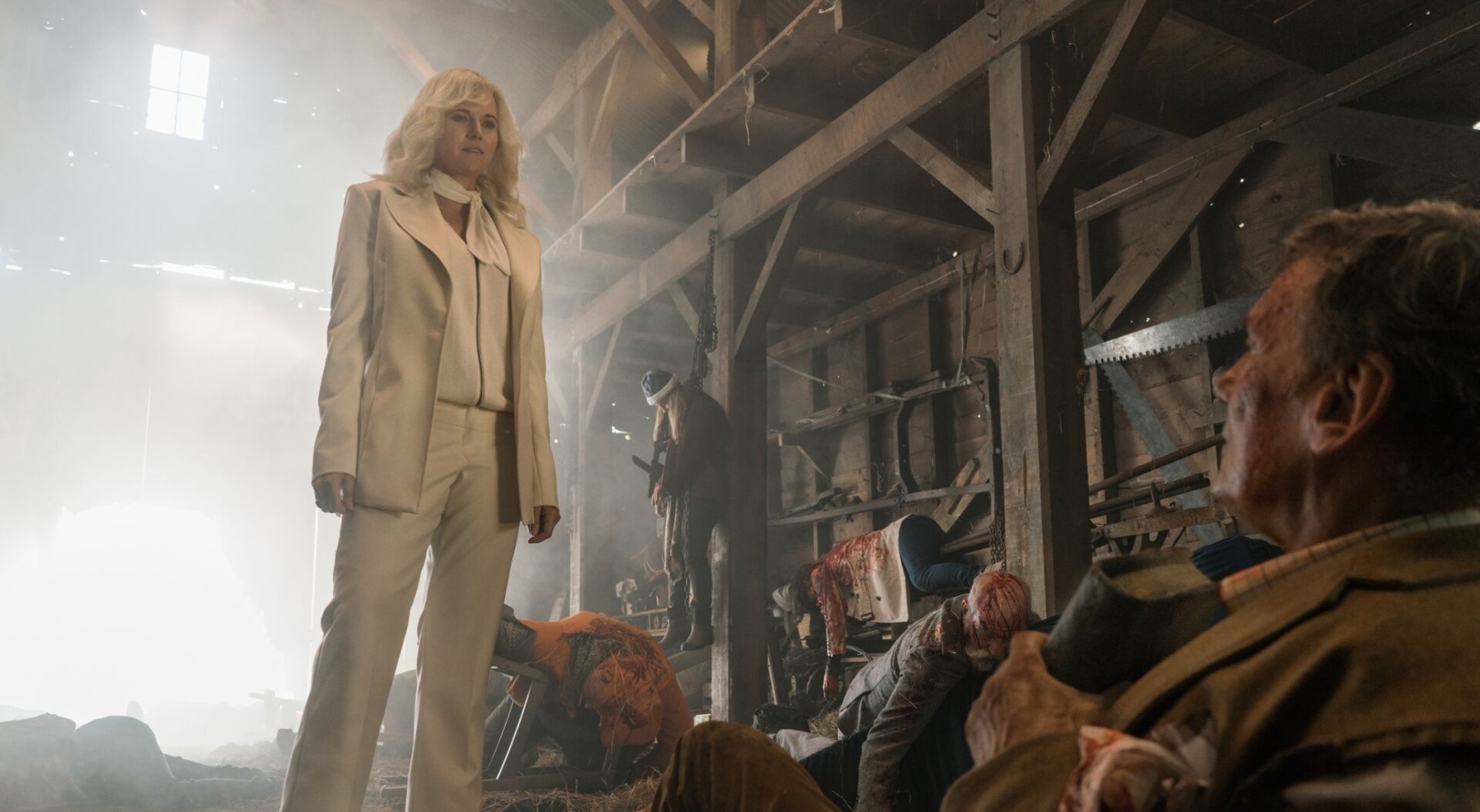 It feels like this season never stops moving, it opens with a rapid pace and rather than slowing down it only shows signs if building intensity as it progresses. It locks you in early and takes you on this ride that you don’t want to get out of because of how invested you become in the characters and their plight against evil. With each passing episode things seem to be getting more and more insane as the stakes are continuously upped, so who knows just how crazy this season will get going into the latter half. Despite the fact that it is moving very fast it never gets too fast to where you feel you’re missing any crucial moments. It balances all of the character arcs very well and transitions between the various events occurring concurrently with a nice fluidity.

I’ve spoken about the presence of the OG crew but I am yet to mention the new blood that has joined the cast this season. Arielle Carver-O’Neill is introduced here as Brandy, a school student who unwillingly gets tied up in Ash’s war against evil and whose life is about to change…. probably for the worst. Other than Lee Majors in season two she’s one of the best major (no pun intended) new additions to the show since its inception. I won’t go into the specifics of her character’s background but she is a very fun addition to the crew and one I hope stays and grows over many more episodes. She has a lot to learn in this world and I think it’ll be fun to see how she reacts to the world of the dead. Another new addition is Lindsay Farris as Dalton, a member of the mysterious Knights of Sumeria. His presence in the season is a welcome one from a comedic and story standpoint and the way his character is dealt with I liked as it doesn’t go down the more predictable route I thought it would.

So in the end, if the first half of season three has proven one thing it’s that the quality of Ash vs Evil Dead has not dropped and fans of the franchise who’ve loved the content so far will love the content waiting for them. Look out for some scenes involving musical instruments, Take On Me by A-ha, and one unique credits sequence for some incredible entertainment. I’m going to close out with one of my favourite quotes from Ash this season… “We’ve got everything from D to ildo”.

This was originally posted on the AU Review/The Iris: http://iris.theaureview.com/tv-review-ash-vs-evil-dead-season-3-impresses-with-ample-comedy-horror-and-absurdity/