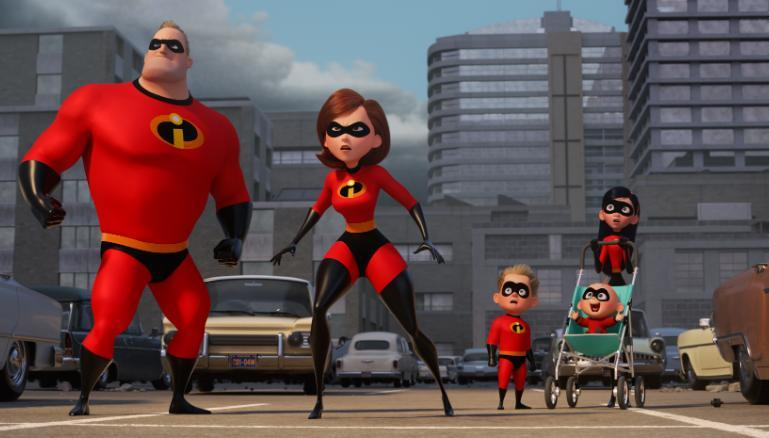 14 years… it has taken 14 years for The Incredibles to get a true sequel and now it has arrived in glorious fashion and Incredibles 2 does not disappoint. The story catches back up with the Parr family after the events of the first film and this time when the safety of the world is being threatened it’s Elastigirl (Holly Hunter) who embarks on a dangerous mission whilst Mr Incredible (Craig T. Nelson) watches the kids. The Incredibles is a Pixar classic so this sequel did have a lot to live up to and I’d say it managed to successfully recapture the same feel, tone, and family dynamic that made the first film so beloved. It may not quite hit the mark set by that film but this is still a thrilling superhero film and an immensely fun ride from beginning to end. Pixar is great when it comes to catering for all audiences and that’s no different here, you get stuff for the younglings and there’s plenty of witty comedy for the adults which is just great. The story is predictable in some respects but also holds its fair share of surprises and is just very damn enjoyable.

The family dynamic and the relationships within that were the glue that made the first film such a delight. Yes the comedy is on point and the action is a joy to watch but without that tight-knit team the movie just doesn’t work. That same focus on family is a central theme of this movie too and it’s still a tonne of fun watching these characters clash and interact in a variety of situations. All of your favourite characters come back and they’re as great as ever. Obviously you have Mr Incredible, Elastigirl, Violet (Sarah Vowell), Dash (Huck Milner), and Jack-Jack (Eli Fucile) returning but Frozone (Samuel L. Jackson) and Edna Mode (Brad Bird) return in hilarious fashion. The relationships and team-ups between the bunch make for some of the best highlights of the movie both inside and outside of the action sequences. Elastigirl gets in on quite a bit of the action this time around an it’s great to see her go on a solo mission as we saw Mr Incredible do the same last time. Jack-Jack who was nothing more than a seemingly normal baby for most of the first film gets much more of the spotlight now that his family is made aware of his wide range of abilities. The Jack-Jack Attack short which released way back in 2005 is hilarious as we get to see Jack-Jack let loose and if you thought that was fun he gets up to some serious hijinks here.

And the voice performances are great from the entire cast especially Holly Hunter and Craig T. Nelson who jump right back into these characters 14 years later and make it as if no time has passed at all. Then you have the newcomers in Bob Odenkirk who plays Winston Deaver, Catherine Keener who plays Evelyn Deaver, and Sophia Bush who plays Voyd, who among other new additions all bring their characters to life very well.

Being an animated feature whose core audience is typically younger the story isn’t going to be anything wildly original but it still does take smaller twists and turns here and there that send it in directions you may not entirely expect. There’s plenty of humour spread throughout the entire film and for the most part it all hits the mark and nothing really falls flat. It doesn’t re-use or overuse comedic beats and it makes for constant fresh laughs as the film progresses. The action is fun, fast paced, and thrilling and is more inventive with the way our family of heroes combine their abilities. There’s a great blend of action sequences and character development that keeps things running at a steady pace, never too fast and it never slows to a halt. The plot is constantly moving forward and it never loses sight of its goal by getting sidetracked by other subplots. Brad Bird returning to write and direct is the main reason why this movie perfectly emulates everything that made the first film so damn good and I can’t imagine an Incredibles film without him at the helm.

And I need to highlight Michael Giacchino‘s fantastic score which ties in the classic theme from the first film with great new music which keeps the energy in the theatre high for the entire runtime. It’s fun, upbeat and an all round great superhero film score.

For those who have been waiting 14 long years to see this movie it’s safe to say Brad Bird delivers an ‘incredible’ film that is thoroughly enjoyable from beginning to end and lives up to the hype surrounding it. The action is fast paced, inventive, and a tonne of fun, the humour is very well delivered and there is more than enough to get through the entire film. I’m calling it now, Pixar is going to hit us with another sequel (hopefully with a turnaround under 14 years) and make this a trilogy of awesomeness which I’m sure no-one would be opposed to seeing. It’s a great animated feature the whole family can enjoy and I strongly recommend checking this one out.