San Andreas is a disaster film dealing with yet another earthquake, and a tsunami, and follows a family who always seems to get themselves out of the tightest of situations. So in other words, every disaster film ever, this movie had all the cliche’s that you expect to happen in disaster films, you have super-humans breathing underwater for minutes, last minute rescues and lots and lots of ridiculously close calls. But what made this film more enjoyable than many other disaster films? Dwayne ‘The Rock’ Johnson. Everyone and their mother likes The Rock, he is one of the biggest names in the entertainment industry and such an incredibly likeable guy, you cannot hate this man. So when you put him in a disaster film it just makes things much more awesome, and besides, if i was in an earthquake i would much rather Dwayne Johnson coming to my rescue over John Cusack. The reason why you go to see disaster films is for the crazy mass destruction of a city (usually San Francisco) not for the incredibly deep plot. So in my opinion i value entertaining and fun destruction more in disaster films over providing us a captivating and coherent plot.

Lets start with that destruction shall we? because there is a lot of it, there are buildings falling onto other buildings, the ground collapsing, raining boats this movie had it all, and i was having fun with it. The impossible close calls would bother me if the film was trying to take itself seriously but it really wasn’t, they went for visual effect over practicality and i applaud that decision. They went all out with the visual effects in this film and they look insane. It is one of the best looking disaster movies i have seen and the large scale action set-pieces were just awesome to look at. They are why you watch disaster movies an they did it pretty right. 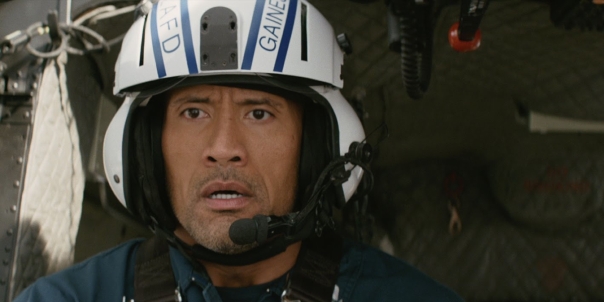 Next up is the characters, you always have a group of characters or a few groups of characters who in some way all know each other and end up running into each other in the middle of a city-wide catastrophe. Most of the time you only really like 1 or 2 of them and the rest you wish would be crushed by something, but in this film i found myself liking most characters. Initially, for the first 30 minutes i thought the side-plot was going to be generic and bore me to death and i also thought the supporting cast was going to be unbearable to watch, but as the film went on i found myself connecting with the characters a little more. Dwayne Johnson was really convincing as this huge heroic paramedic and i really liked Carla Gugino in the film, their relationship was generic but still interesting and kinda surprised me. Alexandra Daddario was also good but her and the other side characters didn’t do much for me, they weren’t really as interesting as The Rock.

The biggest issue i had with the film was pacing, the disaster scenes were great and some of the family bonding scenes were good but the cutting between the two and time spent on each took enjoyment out of some scenes. There would be moments where the uneventful family scenes went for too long or it would constantly be swapping between action and family to action back to family. It just took me out of it a little when it swapped from fast paced to slow pace over and over.

In the end San Andreas is not great film but it is definitely a very enjoyable disaster movie. The mass destruction and impressive visual effects make it fun and the characters and their relationships are alright times but the real star of the show is Dwayne Johnson who elevates the enjoyment factor to the power of 10. If you are looking for a gripping story and complex characters, go someplace else, if its mindless destruction you seek, this is the film for you. – 5.9