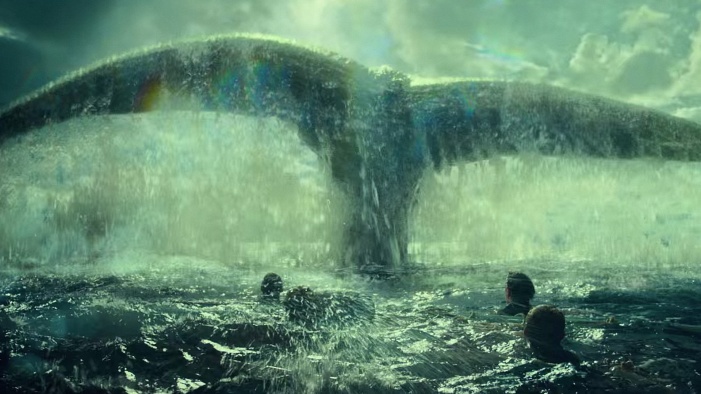 In the Heart of the Sea is an Action/Adventure/Biopic based on the real disaster that inspired Herman Melville’s ‘Moby-Dick’. The film follows the voyage of the ‘Essex’, a whaling ship that was bought down in 1820 by a Sperm Whale in the South Pacific, and is a tale of Adventure, Drama, Survival and Boredom. Obviously the main reason I and most other people wanted to go and see this movie was to see this massive whale go toe to toe with the Essex and its crew. Actual confrontations with the whale in this film were few and far between but when they happen, man do they make an impact. This whale was ginormous, he was grand and it was such a spectacle seeing this huge beautiful whale on screen. The way they emphasise his size through juxtaposing him with the boats gives his presence much more weight. Confrontations with the whale were intense and serious edge-of-seat stuff. The CGI effects of this whale were beautiful and incredibly detailed. This would have taken up a huge chunk of the budget as making this whale look as realistic as possible was crucial to the enjoyment of the film. Some of the CGI in the wide shots were well done, but there were still quite a few scenes and wide shots throughout the film, especially in Nantucket that really just didn’t look right and did take me out of the film.

The film’s biggest problem over the entire film was the pacing and the negative effect that had on my overall enjoyment of the film. This was a lot of the time a very slow film, especially at the beginning where the first 20 minutes or so was very dreary and quite boring. Throughout the film there are quite a few uninteresting moments that constantly just make you lose interest. The biggest culprit of these boring sleep inducing moments were the scenes that are showing Thomas Nickerson (Brendan Gleeson) recounting the events of the film to Herman Melville. Scenes like this are nothing new and have been done in countless films before this, but they were just completely uninteresting and didn’t really add anything to the actual story of the film. I guess they were trying to get us to care about his character and his younger self for what he endured but for me at least i could have done without those scenes and it would have cut at least 15 minutes of its long 2 hour runtime and the film would have flowed better and quicker. There was one bit of dialogue early on that i thought spoiled how the film was going to end, but it was a very good piece of misdirection by the writers, if it was intentional.

Acting wise, the film was pretty good. Chris Hemsworth was the obvious standout, he was able to show off his acting talents quite a few times throughout the film, but still it was nothing amazing. The supporting cast was also mostly pretty strong, Benjamin Walker and our friendly neighbourhood Tom Holland were good, not great, just good strong performances. Ron Howard did a pretty good job directing the film, most of the time he nailed the tone of the film. The dramatic action scenes were filmed and directed in a very frantic and chaotic manner that upped the stakes during those intense moments. Especially in the latter portions of the film he does represent the sad tones and emotion pretty well and handles some very confronting scenes in a way that isn’t too disturbing but also isn’t sugar-coated. The latter half of the film although not free of some boring moments does pick up significantly from the first half when it introduces some survival elements. It doesn’t really end on a high note, it should have been a short and sweet ending but it is dragged out a little longer and just ended up being alright. 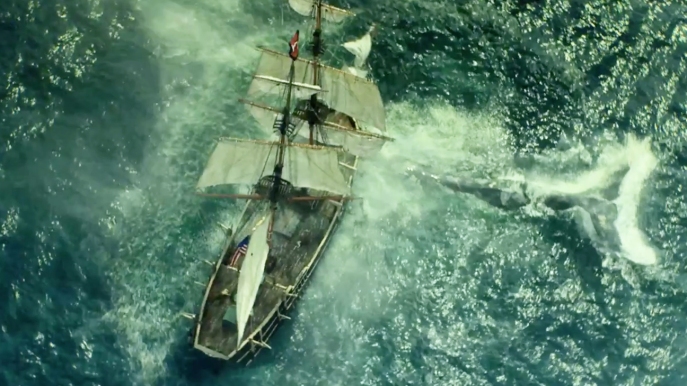 In the end, this is an Action/Adventure that has its intense, dramatic moments, but is not without some boring moments that if excluded could have kept the film to like 1 hour and 40 minutes and would have made it more enjoyable and impactful. If you are fascinated of the story of Moby-Dick then you will probably get more out of the film than i did but it really wasn’t as great as it was meant to be.

Also this film believe it or not was supposed to release way back in March of 2015, but it was pushed back to December into Awards season to possibly get some Oscar recognition. Should have stayed in March because i’ll be genuinely surprised if this even gets nominated for any awards when you consider all of the other great stuff from this year.