Finally guys, a miracle has happened, we now have a ‘The Ring’ trilogy (American), i never thought the time would come, but now that it has we can celebrate. Samara Morgan is back after 12 years being forgotten and after seeing this film i can definitively say that………. she should have stayed dead. It began with the Japanese film ‘Ringu’ in 1998 and this once interesting and terrifying plot has been driven into the ground. A girl climbing out of a TV screen can only be scary so many times people. This film follows a very familiar plot, Julia (Matilda Anna Ingrid Lutz) watches the video and after finding out she will die in 7 days uncovers secrets about the tape that no-one else has ever seen and so she goes on a hunt to discover what really happened to Samara. The movie isn’t ‘the worst thing ever’ and unbearable to watch as it does have a few moments that are quite scary and some other little story elements that are kinda ok. But despite its many efforts to change up the game you can’t look at this and not recognise that at its core it is just a very tired premise. 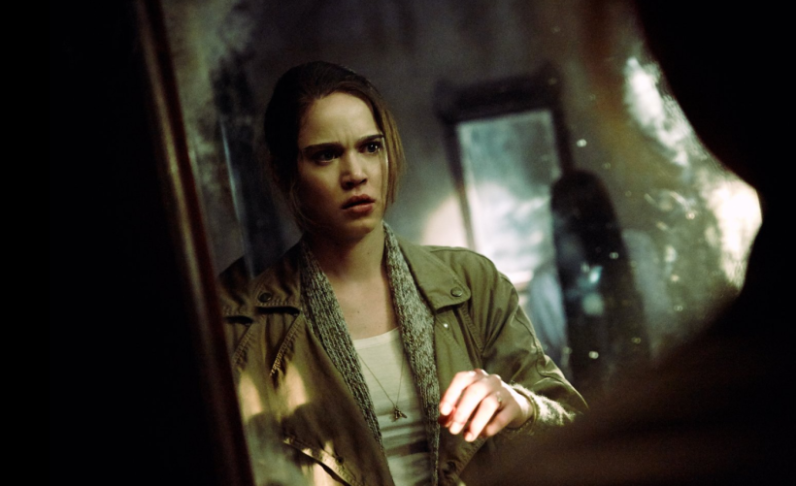 One of the selling points of the film was that finally Samara was trading in that old VCR and maybe picking up a nice Blu-Ray Player instead, essentially moving over to more modern forms of media. This did leave some room for innovation but other than the opening scene from the trailer that takes place in the plane the new technological advancements don’t really do anything strikingly new. Whether the video is being passed around as a tape or a digital file it doesn’t really make a difference. There is a cool thing in the film that was actually pretty interesting and would have been a new way to approach a Ring film but the movie introduces and forgets about it all within a matter of about 3 minutes. So there is one part of the film where it looks like there is a secret organisation or more like a cult of people who know about the tape and try to work together to spread the video around to avoid people actually dying. This was a very cool premise that i reckon would have been a great way to change things up from the very simple formula being rehashed over and over again. So it’s a shame this movie didn’t take advantage of that and instead just played it way too safe.

The performances in the film don’t help you get through it easily. The leads of the film Matilda Anna Ingrid Lutz and Alex Roe were not good, like at all. A lot of their dialogue was very wooden, dry, and emotionless or they had lines that were just ridiculously overacted. There were a small handful of times where they sell the scares well but that’s about it. I know Lutz comes from working on smaller foreign films and this is her first major American film from what i know so i guess i could give her a pass there. Johnny Galecki is fine in the film, probably one of the more engaging personalities in here, and they managed to drag Vincent D’Onofrio into this film, and he actually wasn’t bad, there wasn’t much to his character but he played it well.

In terms of the story there was always something i found fascinating about the mystery behind Samara and how and why she found herself killing people from within a VCR. That backstory has been covered pretty extensively in the previous films and as well as revisiting some of those plot points, this film does give a little more (newer) insight into her history which i thought was pretty engaging. Overall though the plot is a little all over the place focusing on a few different side-plots that throughout the 2nd and 3rd acts it tries to tie together and i guess does so but very thinly. So other than that and a handful of some pretty tense moments that get you throughout the film what else is there to this film? Not a whole lot really, but there is one Spoiler thing i will go into after my score.

So in the end, Rings tried to bring some life back into a forgotten franchise and other than a few brief moments of intrigue it very much failed to do so. Overall the story was scattered and reeked of missed opportunities, and the performances from the leads weren’t doing anything to help the film. There are many better horror movies out there in 2017 so just go see anything else, but if you are still a die-hard fan of this franchise or B-grade (at best) horror films then you will get a kick out of this.

So now there are SPOILERS TO FOLLOW, so DON’T read on if you have NOT seen the film as i will be spoiling the ending.
.
.
.
.
.
So in the end of the film you find something out that was already pretty much revealed in the trailer and that is that Samara ends up being reborn and taking over the body of Julia. She already took over a body in ‘The Ring Two’ but that was a very brief stint. What this does is surprisingly leave this franchise that should be long dead by now once again open for something new in a possible sequel. You could actually do an entire film where you have Samara terrorising people in a physical (living) form. This isn’t anything worth getting excited over at all as the chance of this getting a sequel i don’t believe would be very high but part of me wants to see what they could do with something like that.