So i know what you’re probably thinking… “here we go again with yet another rendition of the King Arthur story”. And i get it, it’s exactly what I thought when I wasn’t impressed too much by the trailers and when the poor reviews came out. But what director Guy Ritchie does here by bringing his style of filmmaking and a 21st century feel to this familiar story makes for a very engaging, fun, and enjoyable ride that I for one didn’t expect. Charlie Hunnam plays Arthur and leads an impressive cast from Jude Law (Vortigern) to Djimon Hounsou (Sir Bedivere) who all put in strong performances in a film that takes itself seriously enough to where it can still have a great deal of fun within the fantasy world. The film follows Arthur who fights his way to prominence whilst dealing with acknowledging his legacy in order to face his uncle Vortigern who has since seized the crown that was once his fathers. Visually it is incredible, there is some light humour spread throughout, and there is just so much excitement to be had with this movie.

I will begin with the star of the film who is without a doubt Guy Ritchie, his distinct style is very evident throughout all or most scenes and it is the reason you are able to separate this film from the other Arthurian legends. He utilises a style that brings a modern atmosphere to a classic tale and time period making it a very fun time but still retaining the core components of the legend. A few times during the film he utilises a fast paced montages extremely effectively and for a number of reasons. One being to obviously skip ahead a large amount of time whilst still understanding the important events that occurred, and another reason was to make potentially boring sequences fast paced interesting. Rather than telling some events in a strictly linear format he very successfully represents the pre-planning stage, planning stage, and execution stage of an action sequence all within the same montage of scenes in a very upbeat way. Without Guy Ritchie’s involvement this probably would have been as dull and bland as it appeared to be from the outset. 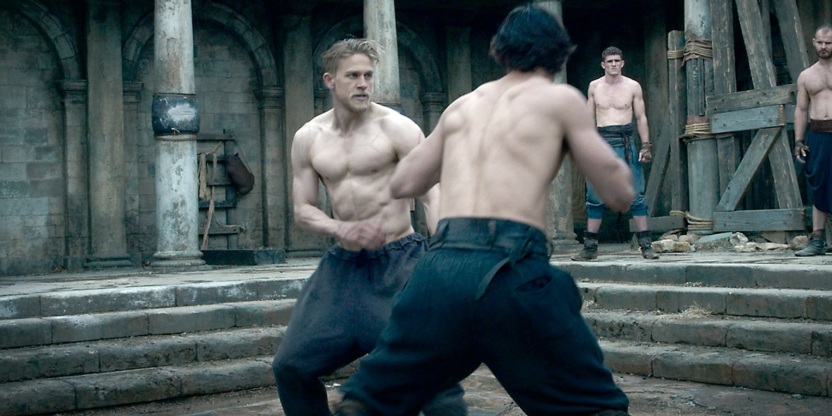 The cast here involves some big names, all of whom deliver with their characters whether that be in a main or more supporting role. Some of the very well executed supporting performances include those by Djimon Hounsou (Sir Bedivere), Aidan Gillen (Goosefat Bill), and Astrid Berges-Frisbey (The Mage) who were all very fun to watch and I was able to get behind their likeable characters. Aidan Gillen I wasn’t sure was cast accurately when the film began but as time went on I warmed up to his character more and more. Jude Law plays the big villain and he proves again can successfully play a very good villain as he brings a sense of personality to a character who could have been just super serious evil guy #31. Charlie Hunnam who plays the lead is by far the highlight and plays a very likeable lead to where you are rooting for this guy the entire time, and not just because he is Arthur. He deals with a very fun and charismatic personality and can still deliver on the more serious personal choices his character faces. 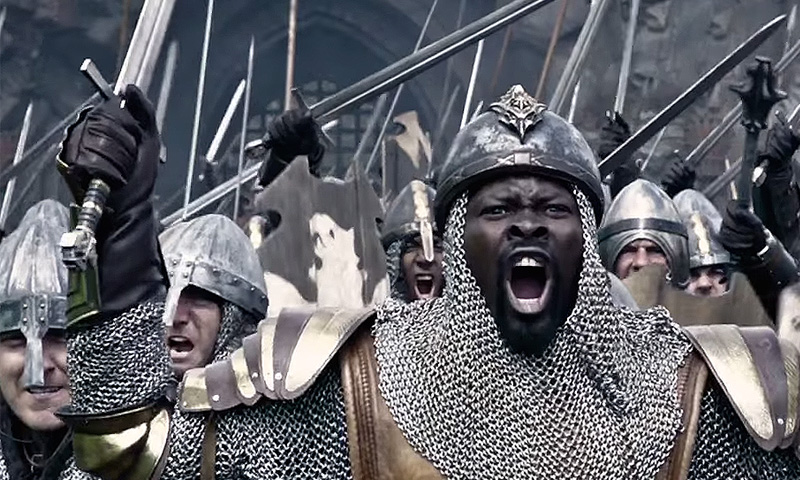 One thing I also want to note is that this movie is visually phenomenal. Everything in this world looked so damn real it was hard to admit at some points that certain elements were CGI. From the landscapes to the large castles to large creatures everything looked spot on. Now I know where the majority of the monstrous $175M budget was spent. One role I want to bring up is Annabelle Wallis’ role in the film, I was pleasantly surprised to see that she was in the movie and then to see that she has only a handful of short scenes and doesn’t really do much was a little disappointing I must admit. I for one wouldn’t mind seeing a sequel set in the world or even a prequel set during the opening scene with Eric Bana and Jude Law’s characters. But considering the film bombed and failed to make back its budget at the box office there is next to no way that is going to happen.

So in the end I think it’s safe to say i was incredibly surprised by how much I enjoyed this damn movie. I thought it would be dull, slow, and just a very bland King Arthur story but it’s the complete opposite of that. It was fast paced, engaging, fun, and the implementation of Ritchie’s light humour made the whole thing very upbeat. I was waiting for a drop in quality somewhere, not because I wanted it rather because I didn’t think it could keep up the act for two whole hours. But it does and i have to say, disregard the reviews and if you are a fan of these types of films especially the King Arthur story check this out because it is considerably better than it is made out to be.