With the impending release of ‘Jigsaw‘ next month I thought it would be a good time to revisit the entire Saw franchise from start to finish for the 50th time and review each one. Now i rewatched and reviewed the first Saw film last year and you can find that review HERE, so I am starting with Saw II where we will progress right through to Saw 3D. Saw II sees the return of Jigsaw who since the events of the first film has devised an even deadlier trap that locks 7 individuals in a death house where they must use their will to survive and obtain hidden antidotes. This sequel takes the franchise in a direction more aligned with the ‘torture porn’ label attached to the later films but still retains some of the thrills, twists, and psychological horror elements that made the first instalment so iconic. The film is directed this time by Darren Lynn Bousman as oppose to James Wan who is on as an executive producer, but Leigh Whannell is still involved here as a writer. The story here is gripping and will have you on the edge of your seat the entire time, the traps are more gory and bloody than before, and the inclusion of characters such as Eric Matthews (Donnie Wahlberg), Allison Kerry (Dina Meyer), and Daniel Rigg (Lyriq Bent) help keep you strongly invested in at least one half of the story. 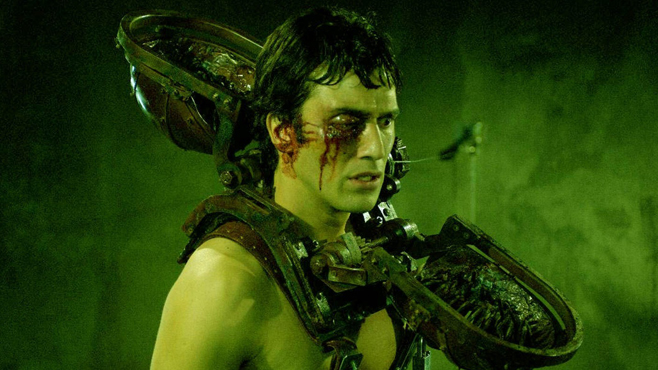 Where the first film takes place almost entirely in one location, the events of this film occur over two (yes TWO) different locations where you essentially have two ‘games’ playing out concurrently. The events in an undisclosed house follow the more traditional death trap scenarios that are linked with the Saw franchise in which 7 new characters are put through gruelling and intense tests. Whereas in another location, the game is a much more intelligent one, there is no blood, no gore, and no threat of impending death via minor feats of engineering. This contrast I feel is brilliant and the two plot lines are allowed to progress on their own with minor crossovers and story elements tying them together. Personally I find the mind games being played between Jigsaw and Detective Matthews the much more fascinating story here, especially due to the fact that I have seen the film so many times that I can pick out all the small hints early on that geniusly foreshadow the events to come. The way this plot builds and builds in intensity follows a structure similar to the first film where everything leads up to a big finale that will no doubt shock you.

Now I spoke about the fact that the events going down in one location are more fascinating than the events going down in the house and that isn’t down to the story, but rather the characters. The progression of events in the house is interesting as seeing if or how these characters get through their various tests adds a lot of tension and is quite action packed from beginning to end. But where this side falters is down to not really being able to connect to many of the characters and some of the decisions they make being pretty unrealistically dumb. But then again, i’m not the one trapped in a death house dying from a slow acting poison. The issue is that just like the characters themselves you don’t get enough time to know any of them as you are introduced to them at the same time they’re introduced to each other. This makes your investment in those scenes not as strong as it could be. Daniel Matthews (Eric Knudsen) and Amanda Young (Shawnee Smith) are the only two you can show much of an interest in due to their importance in wither the events of the first film and the other story within this film. But really, you are just waiting for this group of 7 to be killed off by some bloody traps.

This marks the first time we get to see Tobin Bell actually in action as Jigsaw as he did spend almost the entirety of Saw motionless on a bathroom floor. And here you get to see the genius mind behind all of these traps at work and it is incredible. He just always comes across as the smartest person in the room and he doesn’t even need to do any killing himself to cement himself as one of the most iconic villains in the history of the Horror genre. Tobin Bell is phenomenal in the role, so much so that you can no longer separate the man from the role as he delved into the character so deeply that you only see Jigsaw. Wahlberg, Meyer, and Bent form the team of detectives and officers working against Jigsaw that in a very small amount of time are established as likeable characters you can connect to in the story. They sell the desperation and fear going through their characters’ minds very well making for a number of interesting dialogue sequences.

So there you have it, the first instalment in my series of Saw reviews leading up to the release of ‘Jigsaw’, and we began with a great one that doesn’t quite live up to its predecessor but does include what is for me the hardest trap to watch……… really not a fan of needles. Saw II retains some the psychological horror elements of the first film and blends that well with the more bloody and gory sequences that the franchise is most known for. Right from the intense cold open you are thrown on an intense ride that builds up intensity and pace as time goes on to a finale that I know I didn’t see coming. Saw is such an iconic franchise that you know what it entails and if blood and gore isn’t your thing then you should shy away from it, but otherwise definitely check it out.