*HEAVY SPOILERS AHEAD FOR FANTASTIC FOUR*

If you have not realised already this is a spoiler filled review, so i will be going in depth with this film talking about plot spoilers for the entire film. If you have not seen this movie then you can check out my NON SPOILERS review HERE, and after you have read that you will hopefully make the decision to save your money for when the next good film comes out. So final warning, below this image will be spoiler territory so leave now before it’s too late.

OK so, if you have read my non-spoiler review for this film you would know that i really disliked this movie to the point where i now hate it and gave it a solid 4/10. In fact, i think that this is such a boring and exhaustingly bad film that i could contend for hours as to why this movie IS a bad movie. In the words os John Campea “All film is subjective”, and i agree with this statement, but it comes to films like this one, where i cannot imagine any person possible liking this movie, it is that depressingly bad that you cannot even enjoy or have fun in this movie. So you may be thinking, why is this not my most hated movie of the year, and why did it still get a 4? Well, as much as i can go on for ages as to why i think this movie is trash, if i sit back and think about what i DID like, there are still a couple of aspects that i thought the film did well. 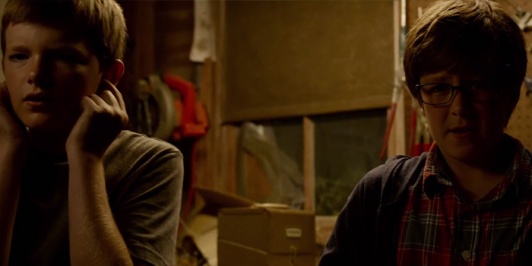 One of those things being the first 20 minutes of this movie where it shows Reed Richards and Ben Grimm as very young kids, and you spend this time really getting to know them and their relationship which ends up being the only developed relationship in the entire film. This was such an intriguing portion because it felt like a very interesting sci-fi film with these two kids who were very likeable and did a great job representing their characters. It reminded me of moments from Project Almanac which also featured a few friends building some device in a basement and as a result, cutting power to an entire city at one point. This dynamic between Reed and Ben is carried throughout the entire movie and you believe how this extremely intelligent kid is best friends with the tough guy. Unfortunately, once it skips over to where they are supposed to be 18-19, the film begins to come to a grinding halt once all of the main characters are somewhat established.

And that the other thing i thought the film nailed was the representation of the main five characters: Reed Richards, Ben Grimm, Johnny Storm, Sue Storm and Victor von Doom. I thought the characters were very interesting on their own and all possessed a personality that made each of them unique and cool to watch. Now when i say Victor von Doom i am talking about him pre-transformation, but we will get into that a little later. The traits of each of the characters was translated well and much of that would have had to do with the good performances from all of those actors. There were one or two more moments later on where it looked to be heading in the right direction but it continued with more of the same crap.

But the good stops there, everything i mention from NOW will be regarding all of the things i did not like at all about this movie, so get ready because this may take a while. 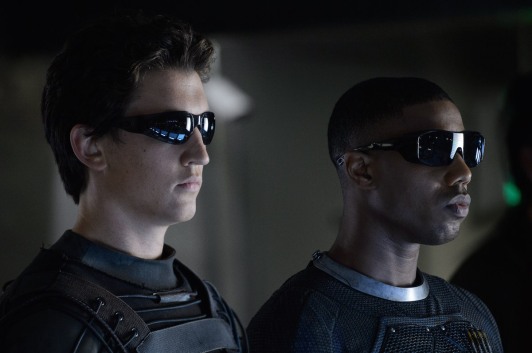 Seeing as though we were just talking about the characters, we might as well move on to the character relationships and chemistry, or lack thereof. This movie did a terrible job at showing the relationships between all of these characters except for Reed and Ben. These people are supposed to clash and relate to each other in ways that would make them a good working team, but they just have no positive chemistry at all. Have you ever been forced to join a group project with three other people who you have never met before and were forced to pretend to like them? Because that is exactly the situation with these characters. Even Johnny and Sue who are step-siblings for Christ sake have no back and forth chemistry when they are in the same scenes together, but then there are a few scenes where they are speaking with their Dad eluding to the fact that there is some friction between them but none of that ever plays out. It was a huge wasted opportunity to develop these interesting characters from four individuals into a well structured group, especially when skip all of that bonding in 5 seconds with a “One year Later” screen. I could go on for ages with countless examples on why the character relationships suck but i’ll try to hold back.

Lets move on to some more plot related aspects that were just complete and utter garbage. One of those being the absolutely dumb way that Sue Storm gets her powers. Everyone and their mother knows that they go into space, or another dimension or another planet and something happens for them to get their powers. But here, Sue doesn’t even leave Earth, in-fact she gets her powers because she was within a 10 metre vicinity of the transporting device when it returns. You understand how the others got their powers, Ben gets transported back around rocks, Johnny gets transported back on fire, and Sue just kinda gets knocked out and can suddenly turn invisible, the worst reasoning or lack of reasoning ever.

Now is the time everyone, I need to talk about Doom, just thinking about him makes me angry so i will try to get this over with. How to they manage to completely fuck up one of the best villains of the Fantastic Four in EVERY SINGLE WAY imaginable. From the way he looks, to the way he acts, to his ridiculous powers, to his shitty plan to destroy Earth. Firstly, when everyone was bitching about his appearance in the trailer i managed to somehow stay optimistic that it may actually fit within the movie. Boy was i stupid, i don’t even think those who thought it was dumb were prepared for just how dumb it would be. I literally could not take this guy seriously, i honestly couldn’t, he looks so stupid from the grey toilet paper-like skin to the green dots as eyes (look above, what the fuck are those?) that i think he is one of the worst villain representations visually.

Next up, what about his ridiculously absurd and completely not thought out powers and their usage during the 15 minute anti-climactic battle that was shat out onto the end of this film. This is a guy who can literally make anyones head explode just by going near them, and he can rip holes in walls by looking at them and apparently manipulate the natural land around him. So how the fuck did this guy get beaten by four uncoordinated morons who he could just kill instantly in like 5 seconds. All he needed to do is look at them and finish them off like he did everyone else in the movie, but no, they need the villain to be dumb as shit so we can get a happy ending. Right after walking out of this film, looking back at this shitty excuse for a villain, i thought to myself that i would have to give this version of Doom the title of WORST VILLAIN EVER in a film, alongside ‘Deadpool’ in the other ‘Fox’ owned film: X-Men Origins.

Seriously though, what on Earth was that pathetic excuse for a final battle? It was dreadfully awful, you wait all this time to finally see the Fantastic Four fight together and you still don’t. You have them run one by one at Doom who they have already witnessed is infinitely more powerful than them only to be smashed back. And then you have them get together for a stupid cliche; lets work together to save the world moment where they then quickly do some team attacks and kill this all powerful threat in 30 seconds. Who wrote this garbage?

I have to say that this movie from 20 minutes in to the very end is so depressingly bad that i wanted to leave so bad. I was sighing so much, i had my face planted in my hand for a lot of the film, i wanted to go to sleep so badly that i actually shut my eyes for a few seconds and hoped that the film would be over. It put me in such a bad mood because the movie was in to way enjoyable and it was entirely humourless. I would rather watch the last version of Fantastic Four in 2005 because at least the villain was better than this, even though he was still shit and you can actually enjoy it a little with the dynamic between all of the main characters.

Oh, and to top it all off the movie ends in the dumbest way imaginable and is the perfect way to sum up this entire film. First, they attempt to make the events of this film into a large scale disaster in hopes for a sequel and then it does something so low and desperate with the last line that i stormed out of the theatre immediately after that, i didn’t even wait for the credits to start. You have the four of them talking about what to name the team, and i saw this coming from a mile away. Then, i believe Johnny says the word Fantastic, and you see Reed’s mind click and respond with “Wait, say that again” “Fantastic”, then reed begins to say that he has the name for the team, and it will be The……………………………………….

Yep, it ends there. That was enough for me to leave instantly. So i believe i have talked about this stink bomb enough, i may have missed some stuff but i don’t care and you shouldn’t either. It is a terrible movie so if you did see it, i feel sorry that you too had to sit through this.